My dad asked me why I was giving up volleyball: Kumar Kartikeya 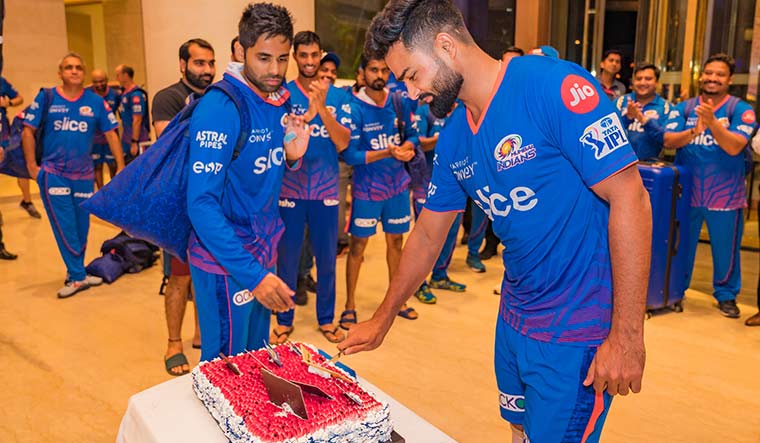 Sweet gesture: Kartikeya cuts the cake as the team celebrates one of the wins in the IPL | Courtesy Mumbai Indians

Before he took up cricket seriously, Kumar Kartikeya Singh, 24, was an accomplished volleyball player. His life-changing moment came when he was in Lucknow to attend state-level trials. Almost inexplicably, Kartikeya chose at the very last minute to give up volleyball and pursue cricket. His father, Shyam Nath Singh, a constable with the Uttar Pradesh Police, was flabbergasted. “You have not achieved anything in cricket so far,” Singh told his son. “Volleyball will make your life. Why are you giving it all up?” But the boy was unmoved. Volleyball’s loss, however, turned out to be cricket’s gain.

A few days later, Kartikeya was at the cricket academy at his hometown Sitapur, with dreams of becoming India’s next batting superstar. But the coach, Sarvesh Srivastava, had one look at him and handed him the ball. “Your height is very good, which is ideal for a bowler. That is what you should become,” he told Kartikeya.

Although he was disappointed, Kartikeya found something positive in the coach’s decision. “It was cheaper to get a ball than to buy a full-fledged batting kit. I had to be judicious when it came to money,” Kartikeya told THE WEEK.

He recalled the first time he went with his father to buy a bat. “I was just 10, and we had got the coach to recommend a good bat. The shopkeeper was a friend, but we often had silly fights. So he chose the opportunity to embarrass us. He showed us an expensive bat. When my father asked for a cheaper one, he said, ‘Jab aukaat nahin hain toh mat aaya karo (If you cannot afford it, don’t come here).’ That hurt me a lot and I made a promise to myself that I would one day prove my mettle.”

After missing out on a spot in the UP under-16 team, Kartikeya moved to the Lal Bahadur Shastri Cricket Academy in Delhi. He stayed in a hostel in Ghaziabad, as Delhi was too expensive. But commuting daily for six hours took a toll on his health. Adding to the trouble was the night job he was doing to pay for his expenses. He was working in a tyre factory, cleaning new batches of tyres. The ordeal went on for a year until coach Sanjay Bharadwaj spotted his talent. Bharadwaj became his mentor and guide and took care of his expenses. All he had to do was to focus on cricket. “The manner in which Kartikeya developed his bowling in a span of six months was incredible,” said Bharadwaj.

Kartikeya, however, failed to clear the Delhi state trials and Bharadwaj asked him to try from Madhya Pradesh where he knew someone who could help. Although Kartikeya moved to Shahdol to try for selection to the Madhya Pradesh team, domicile issues kept him out for nearly two years. Even after he started playing, money was a major issue as divisional matches did not pay much. He managed to cover his expenses with the occasional ‘man of the match’ awards he won.

Kartikeya’s performances in the divisional matches earned him a spot in the Madhya Pradesh Ranji Trophy team, and also his first major paycheck worth 111 lakh. “I spent 11 lakh on a single day at a mall. Usually when I go to malls with my friends, I would never have the money to buy anything. So that day, I simply pampered myself,” said Kartikeya. He also bought cricketing gear worth 13.5 lakh for the boys in his division in Shahdol.

Kartikeya’s big day came when he was picked by Mumbai Indians in April as a replacement for the injured Arshad Khan for a fee of 120 lakh. His debut in the Indian Premier League came against Rajasthan Royals on April 30 at Mumbai’s DY Patil Stadium.

With his new-found fortune, Kartikeya wants to finance the house his father is building at Sitapur. Singh said he started building the house, which is just a brick and cement structure, by availing a loan and withdrawing some money from the Employees’ Provident Fund. “We own two bikes, which were also bought on loan. We spend around Rs 6,000 a month for the bikes, while the housing loan EMI is Rs 17,000. With Kartikeya doing well, I hope to build a good house,” said Singh.

But it was not an easy journey. Kartikeya has not been home for nearly a decade now. He even missed over a dozen weddings, including that of his brother.

For Mumbai Indians, Kartikeya walked in like a lucky charm. He recalled the conversation he had with team owner Akash Ambani. “Now that you have come, our team’s luck will change,” Ambani said before his debut game. The prediction was spot on, as after eight consecutive losses, Mumbai registered their first win, with Kartikeya claiming the wicket of Rajasthan captain Sanju Samson with his slow, left-arm orthodox bowling.

Later that evening, Kartikeya got a call from Sachin Tendulkar. “You will be in the limelight and will get all the attention, but never think that you are above the game,” Tendulkar told him. “Whatever you are, it is only because of cricket.”