BJP government, too, did not want the lokpal law 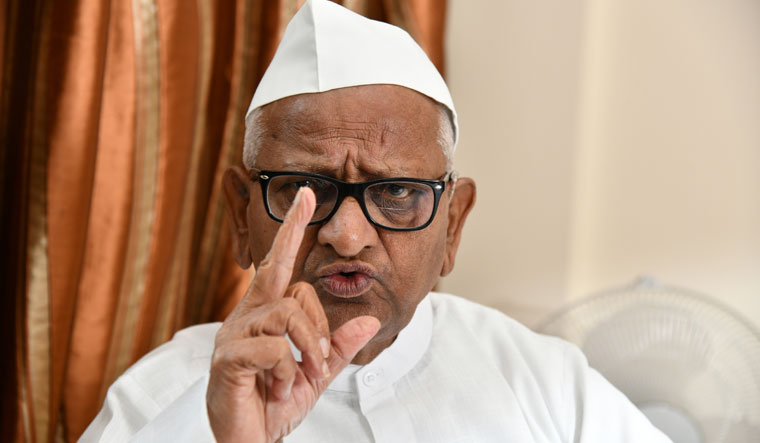 Anna Hazare, who led the India Against Corruption (IAC) movement, rejects the idea that he was in cahoots with the BJP to pave the way for the Congress defeat in the 2014 Lok Sabha elections. The activist, who is said to have had a fallout with Arvind Kejriwal, refused to take questions on the Delhi chief minister. In an exclusive interview with THE WEEK, Hazare talks about the United Progressive Alliance government’s “U-turns” and “betrayals” with regard to passing the Lokpal Bill. Excerpts:

Q\ Do you feel the IAC movement accomplished its goal?

A\ The country has had to wait a long time for the Lokpal. The Lokpal Bill was brought to Parliament eight times, but it could not be passed. In 2011, the whole country stood up to demand that the Lokpal law be passed. The government of the day was left with no option. It finally relented and the Lokpal law was passed. So, it was definitely an achievement.

Q\ You received huge support from the people.

A\ Initially, I was not sure of what kind of a response the andolan (agitation) would get. But thousands of people came to Delhi from all over the country to join the movement. There was so much energy in the movement.

While the response was a surprise, I was sure of one thing, that this law would put the power into the hands of the people…. The government ignored us in the beginning. Even they had probably not anticipated that the campaign would resonate so much with the people. Finally, they had to listen to us and began engaging with us.

Q\ But the UPA government opposed the idea of a joint drafting committee, saying it was unconstitutional.

A\ The government said why should outsiders be involved in the drafting of a law. We said to them how can you call non-governmental people outsiders? Who sent you to Parliament? And then, the committee was formed. Pranab Mukherjee headed the committee. The committee held meetings for three months. And when they saw that the law would be lethal for them, they did a U-turn. They said they did not agree with the draft of the bill. They did not even agree for the proceedings of the meetings to be video-recorded. We asked them why they wasted their time and ours.

Q\ And then, you had another round of agitation in August 2011.

A\ We had announced that we will begin our anshan in Delhi on August 16 and asked the government to suggest a venue for our protest. However, on the morning of August 16, a huge posse of policemen turned up where I was staying and took me straight to the court, where the judge asked me if I would seek bail. I refused to seek bail and said I was ready to go to jail.

I was put in Tihar jail, and the government’s plan was to free me in return for an assurance that I would call off the agitation. They had made arrangements to take me out of Delhi and back to Maharashtra. The government got nervous when I refused to call off the andolan. The jailor called me to his office and said to me that I was free to go, and could not go back inside the jail. I then said I will stay in his office, and I was there for two days before the government relented and gave us permission to hold our andolan in Ramlila Maidan. And, it is only poetic justice that the person who sent me to Tihar himself had to spend time there later on.

Q\ You finally got the government to agree to passing the Lokpal law.

A\ I was at Ramlila Maidan till August 28, 2011. The government was rattled. Emissaries were sent to convince me to end my fast. Prime minister Manmohan Singh wrote a letter to me promising to pass the bill as I had conveyed to the government that any assurance had to be given in writing. Vilasrao Deshmukh brought the letter to me. He read out the letter at Ramlila Maidan, and I ended my anshan. But it was still not going to be easy. There was a betrayal. They took time to bring the bill, and it was finally passed in December 2013.

Q\ It has been said that the Anna Andolan helped Narendra Modi to come to power.

A\ We were not responsible for the fall of the [UPA] government. The entire country had stood up against corruption. I had decided at the age of 25 that I will live and die for the people of this country, for the welfare of our villages. I have nothing to do with any political party.

Q\ It took five years for the Lokpal to be set up after the law came into being.

A\ The BJP government did not want to implement the Lokpal law. They kept delaying the process for appointing the Lokpal. It was largely due to the Supreme Court’s warnings that the government finally formed the Lokpal.

Q\ Are you satisfied with the Lokpal law that came into existence?

A\ I am satisfied with the law. Now that we have the Lokpal at the Centre, the states should form Lokayuktas modelled on it. After all, the law is for both Lokpal and Lokayuktas.

Q\ It took five decades for the Lokpal to be created.

A\ The political class did not want the law. They did not want it because the control would be with the people. The law says that if any citizen sees any corruption in the government or in the bureaucracy, he or she can complain to the Lokpal, which will investigate it…. And this is precisely the reason why the political class had been opposed to it.

Q\ Farmers’ agitation against the Union government is going on. What, according to you, is a solution to their problems?

A\ I sat on anshan at Delhi’s Ramlila Maidan in March 2018 to demand that the commission for agricultural costs and prices be given Constitutional status and it should be an autonomous body. A written assurance was sent to me by the prime minister’s office that it would happen. It was also assured that minimum support price would be fixed as per the M.S. Swaminathan Commission report. The assurances have not been fulfilled, yet. I want to warn the government that if the assurances are not fulfilled, I am ready to carry out my final andolan.

With regard to the ongoing farmers’ agitation, my appeal to the farmers is that their protests should spread all over the country, but they should remain non-violent. The agitation has my full support.