The IAC campaign has done more harm than good 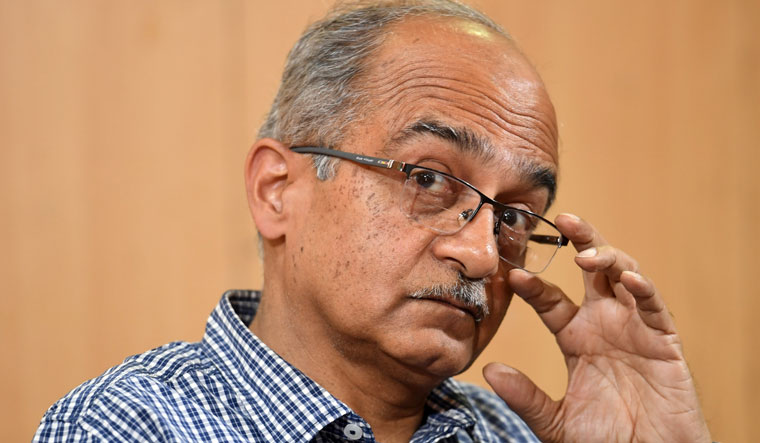 Activist-lawyer Prashant Bhushan claims that the BJP and the RSS supported the India Against Corruption movement in a organised manner to bring down the Congress, and alleges that Delhi Chief Minister Arvind Kejriwal would have been aware of it. Bhushan adds that the movement did not yield the intended results since the Lokpal, despite being put in place, is weak and virtually non-functional. Excerpts from an interview:

Q\ What are the key takeaways of the IAC movement?

A\ It was an important campaign for setting up an independent ombudsman for corruption and it got a lot of support from people, especially the youth. Unfortunately, it did not yield the intended results. After 10 years, we see that there is virtually a non-functional Lokpal. That is because of the weak people who have been selected [to the anti-corruption ombudsman]. This [Union] government does not want an independent ombudsman. Nor have we got a Lokpal in Delhi, even though the Delhi government is headed by the people who were instrumental in the movement.

The most unfortunate thing is that this movement was used from behind by the BJP and Narendra Modi to discredit the Congress and install themselves in power in 2014. The movement played a significant role in destroying the Congress and installing the BJP in power, which was a very unfortunate and unintended consequence. This government is far, far worse than the Congress government, both in terms of corruption as well as in terms of its fascist nature and destruction of democratic institutions and norms. Maybe, in hindsight, we ought to have foreseen this.

Q\ So, you feel it did more harm than good.

A\ Yes. Eventually, it has done more harm. Also, because leaders of this movement such as Kejriwal abandoned it and made compromises for power, and the Aam Aadmi Party became just like any other party.

Q\ Did you expect the movement to get so much support?

A\ It was a combination of many things. One thing, in retrospect, was the backdoor support that the BJP and the RSS gave to the movement, and through some of the mainstream media. Media support was a very important element in mobilising the youth.

Q\ When did you first suspect that the BJP and the RSS were involved in the campaign?

A\ I was not looking so closely at who was supporting and how. It became apparent after the BJP came to power. In retrospect, I could see that the RSS and the BJP were in a very systematic, organised, well-thought-out manner supporting the movement to bring down the Congress.

Q\ Were any of the IAC leaders aware of the BJP-RSS role?

A\ Yes, I think Kejriwal would have been aware because very consciously he took the support of Baba Ramdev and Sri Sri Ravi Shankar who turned out to be affiliated with the BJP.

Q\ What led to the disintegration of the campaign?

Q\ Kejriwal had accused you and Yogendra Yadav of conspiring against him.

A\ We had no reason to conspire against him. I was never interested in power. We saw the kind of methods being adopted by Arvind in terms of selection of candidates, using unethical means and fabrications to discredit the Aam Aadmi Party Volunteer Action Manch, letting go of our standards of transparency and Lokpal. And because I was opposing these things and he realised I would not allow these things to happen, he had to expel us. If he feels that questioning unethical methods and practices amounts to backstabbing and conspiring, then that is OK.

Q\ How do you look at the evolution of Kejriwal as a leader?

A\ He is a clever politician, a wily fellow who understands the pulse of the people. He is willing to adopt any means and is amoral and non-ideological about everything.

Q\ How did you regard him when you agreed to join the movement?

A\ I had a very rosy-eyed view of him. I started seeing these dark aspects of his character only after the Lok Sabha elections in 2014.

Q\ Kejriwal and his party are regarded as the biggest success story of the last decade.

A\ In a way, they have been a big success story. It is undoubtedly because of the IAC campaign. And, of course, it is partly to do with Arvind’s political cleverness and ability to judge the pulse of the people. But the party has not been able to expand beyond Delhi because of his letting go of all the principles on which the party was founded. He allowed it to become just another political party.

Q\ Kejriwal recently declared that the AAP would emerge as an alternative at the national level.

A\ It is foolish. The AAP hardly has a presence even in Punjab, where in the civic polls, it did so poorly. Had he stuck to his original principles, the AAP could have become the ruling party in Punjab.

Q\ How would you describe the track record of the Narendra Modi government in fighting corruption?

A\ Zero. For him, everything is a matter of propaganda and projection. Even for Kejriwal, to a very large extent. Politics for them is about creating public perception, however false that perception may be. Modi never formed the Lokpal. Finally, he was forced to form the Lokpal due to the Supreme Court’s intervention. It is a weak Lokpal. It has no credibility.

Q\ Can we see another such movement anytime soon?

A\ It will be difficult for people to come together. That is why they have not so far. But the farmers’ movement has shown that people can come together. The issue of unemployment also has the potential to attract a large number of people.