The movement failed to provide a credible alternative 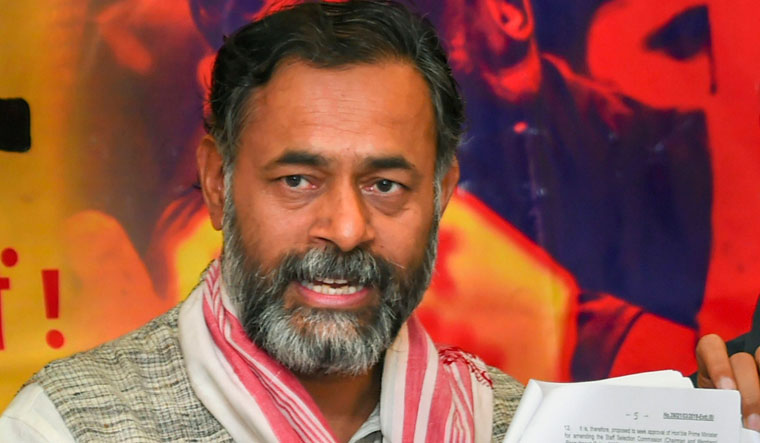 Social activist Yogendra Yadav feels bad, and in part responsible, for the unintended and undesirable consequence of the India Against Corruption campaign—which helped the BJP to win the 2014 Lok Sabha elections.

In an exclusive interview with THE WEEK, Yadav, who had been expelled from the Aam Aadmi Party, says that the Delhi chief minister does not have an ethical bone in him and is ready to do whatever it takes for the sake of votes. Excerpts from the interview:

Q\ How significant was the India Against Corruption movement?

A\ I said then, and I believe it even now, that it was not so much a movement for Lokpal, the ombudsman, but ‘Lok-bal’, or people’s power. The real significance of the movement was that people realised their power, that they can be active agents of history. In that sense, the movement was historic.

Q\ What inspired you to join the campaign?

A\ I was not in the core group of the IAC. I spoke from Ramlila ground in favour of the movement as a fellow traveller and supporter. My real organisational involvement began only with the announcement of a political party.

The idea of an all-powerful Lokpal did not appeal to me. What inspired me was that this movement made ordinary people realise their power.

Q\ Do you see similarities between the ongoing farmers’ agitation and the IAC movement?

A\ Some similarities suggest themselves. When you have a mass mobilisation of that kind, people spontaneously jump in. The organisational format becomes less important. People’s sense of what they can achieve gets elevated. The rulers are on the backfoot and lose legitimacy.

The farmers’ movement may not have done it throughout the country, but in those areas where the movement is intense, you can see this happening.

The differences are that the IAC was a movement of the urban middle class, and this is a peasant movement. The media was enamoured with the IAC movement. At least a predominant part of the media has been hostile to the farmers’ agitation.

Also, at that time, we had a very weak and confused government, at times over-suppressive, and at other times over-submissive. Now, we are dealing with a ruthless and arrogant regime, which does not know when to step back.

Q\ Narendra Modi is seen as the biggest beneficiary of the IAC movement.

A\ It is undeniable that the movement delegitimised the United Progressive Alliance and the Congress in particular, and eventually, the beneficiaries were the BJP and Narendra Modi. The movement failed, in the short term and medium term, to provide a credible alternative, and the entire dividend went to the major opposition party of the day.

I do feel bad, and in part responsible, for this unintended and undesirable consequence. But I would disagree with those who hold the movement responsible for the rise of Modi and think that it was a mistake to have exposed the Congress regime.

Q\ Many IAC members, including Anna Hazare, were not for the formation of the Aam Aadmi Party.

A\ Such movements are short-lived. If the AAP had not been formed, the energy created by the movement would have evaporated. It is not true that Anna Hazare was always opposed to the formation of a political party. I was present in meetings where he actively participated in discussions on the election campaign before the formation of the AAP. Anna Hazare’s position has been somewhat ambiguous.

Forming the AAP was not a wrong decision. The problem was it was done without adequate preparation and careful thinking about organisational structure, principles, ideologies and policies. As a result, it rapidly degenerated into a very routine kind of political party.

Q\ What resulted in your fallout with Arvind Kejriwal?

A\ This is the one question I am asked most often. Arvind and his coterie managed to create an impression that there was some secret, private dispute which led to our [Prashant Bhushan and Yadav’s] expulsion from the AAP. Somehow, everyone forgets that we had written detailed letters to spell out the issues that we had raised in the party. These were issues of financial probity, ethical standards, inner-party democracy and autonomy of state units. In retrospect, I hope, everyone can see the merit in the points we raised. Going beyond the specifics of the dispute, let me put it this way: To keep a party like this going, you needed a balance between ethics and viability. The defeat in the 2014 Lok Sabha elections led to a division between those who stood for principles, and the others who wanted success at all costs. The latter, led by Arvind, controlled the levers of power within the party, and they threw us out. There was nothing personal about the whole affair.

Q\ How do you see Kejriwal’s evolution as a leader?

A\ Arvind is brilliant when it comes to energy, focus, strategy, timing and his ability to take hard decisions. Sadly, he does not have an ethical bone and is too insecure to allow collective leadership. Of late, he has turned into a populist, pure and simple. He is out to chase voters and is willing to go wherever votes and public opinion take him. He would talk loudly about full statehood for Delhi while keeping quiet about the federal rights of the state of Jammu and Kashmir. He will waste public money to hold Iftar parties, but keep quiet about riots in the city. His sudden love for Hinduism and ‘kattar’ nationalism is the logical culmination of his brand of populism. It is really sad to see someone like him stoop to such depths.

Q\ Can there be another movement like this, given the way it ended?

A\ Can we have a similar mass movement? Yes, I think we can, we will. If the media were to back the farmers as it backed the Lokpal movement, the present farm agitation has the potential of being more consequential than the IAC. Another issue that is waiting to explode in this country is unemployment. It is an urban issue and involves the educated as well. This can create a bigger movement one day. But for that to happen, we need to shake off the cynicism created by the political fallout of the Lokpal movement.