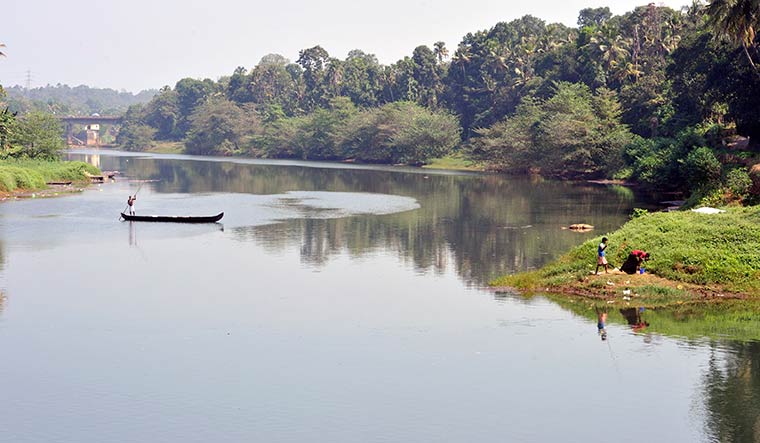 Meeting point: The junction where the three rivers join in Muvattupuzha | Josekutty Panackal

Muvattupuzha, where I live, is situated at the confluence of three rivers—the Thodupuzhayar, the Kaliyar and the Kothayar. They join to form the 121km-long Muvattupuzhayar, which flows by my home on its way to the Arabian Sea. It is a nondescript, dusty town, without many parks, restaurants or cafes. Still, its people are simple and without hypocrisy, the kind who will barge into your home without an invitation if they hear you are sick, and are not hesitant to ask you what your salary is or why you are not married yet.

If you want to get a taste of my town, go to the walkway by the river in the mornings. You will find clusters of morning walkers, mostly men, in lungis and gym shoes, discussing everything from money to marriage and Modi. Then there are the college couples leaning by the rails, with the women in designer rip-offs and men wearing superstar Mohanlal-style bling bracelets. In their flashy neon outfits, the young cyclists look like they just stepped off the pages of National Geographic, and the hobby fishers are probably the only ones who find you less interesting than salmon. The morning tableau would not be complete without our lecherous Lotharios, those men who discharge their duty of gawking at passing women with great professionalism.

In my childhood, the river was the prime attraction for my cousins to come to my home during summer vacations. We would swim to its far end and let the current carry us back. We would chase each other on the sand strip between the two banks. Once, we spent an entire evening collecting twigs to make a raft, which sank without a trace. Another time, we played the classic trick on my cousin where we dared him to strip and cross the river, and when he came back, we hid his clothes. On one end of the river, we could see the hospital that my grandfather built in 1956, now run by my parents. On the other was the junction where the three rivers met. A five-rupee ferry ride would take us to the banks of the other rivers, where we would play pranks on random strangers.

The town, when I was young, consisted of the Muvattupuzha Club, where a game of amateur badminton would be followed by a glass of chilled lemonade and an omelette by the counter top of the run-down clubhouse. A rickety TV mounted high on the wall perpetually played re-runs of cricket matches. Every New Year, the club would be lit up and there would be fireworks. The lime juice at the club house was only rivalled by the one at the Indian Coffee House in the heart of town, a dingy place with the blue paint peeling off the walls. Then there was Latha theatre. Matinee and second shows were so crowded that, unless you got a balcony seat, you would have to piece together the film’s plot from the dialogues, because the screen would be blocked by those sitting in front.

Muvattupuzha has always been my centre of gravity. In whatever direction my life pivots, it always returns to ground zero. In many ways, I am an extension of my hometown. That is why during the floods of 2018, when my town got drowned, so did the certainties of life. We woke up one morning to incessant rain, and to my surprise, the water had risen to the basement of our home. We could see the television set, several pairs of footwear and other random items floating on water. News channels and circulating WhatsApp videos informed us about people stranded in many parts of the town, about provisions worth lakhs of rupees being destroyed, about landslides occurring at numerous places and about homes in neighbouring areas getting completely flooded.

Ten staff members at our hospital got stranded on the top floor of the building. The ground floor was inundated, with the water level steadily rising. My father called several helpline numbers and many government officials, including the district collector, to evacuate them. But since the hospital was situated by the river, the current was too strong for the boats to risk going there. Thankfully, the staff jumped across the wall to a nearby temple, where they were provided with food and shelter for the next two days, until Navy boats came to rescue them. We lost lakhs of rupees worth of equipment, including the X-ray and Ultrasound machines and the ECG treadmill, but we escaped relatively unscathed.

Until recently, climate change had been a very distant phenomenon for me. I usually skipped items on climate conferences and ecosystem loss in the newspaper. But the floods changed that. Because ‘resilience plans’ and ‘green infrastructure’ might seem remote and far removed from me, but the anguish of those who had lost their loved ones in the floods was real. The helplessness of those staying in relief camps, having lost their home and their belongings, was real.

After what seemed like an eternity, the water receded, leaving only a moist fear in its wake. My town shuddered back to life. Today, modernity is slowly seeping in. We recently got our first mall, replete with a gaming zone, a multiplex and a Fabindia that has been ‘coming soon’ for months, but not getting here. A former Mrs India runner-up started a gym and a health café, kick-starting the fitness fad in my town. Our men donned their lungis and their gym shoes once more, and our college Romeos started once again romancing their lady loves. When the lechers went back to business, you knew things had returned to normal. We once again became fellow sojourners in this apocalyptic tale whose end remains unwritten.

In August 2018, Kerala witnessed the worst floods since 1924. Over 483 people died, and more than a million were displaced. According to a report by the Intergovernmental Panel for Climate Change (IPCC), rains are projected to become more extreme in certain parts of Asia and other tropical areas.