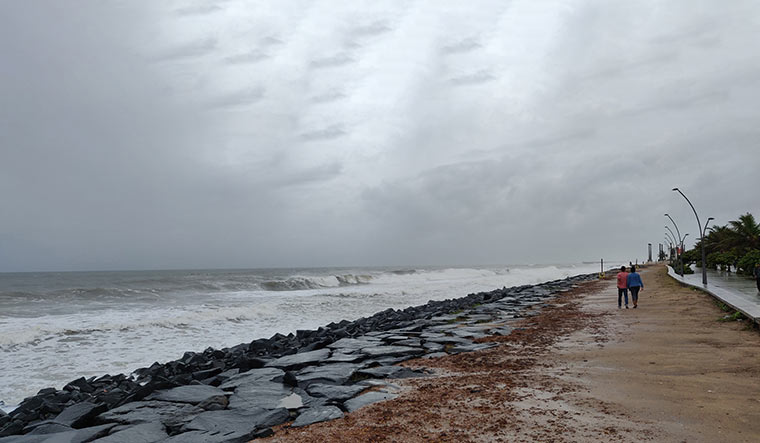 Mobile phone fully charged. Water filled in the overhead tank. Ripe coconuts plucked to avoid them crashing onto the terracotta Mangalore tiles on the roof. Candles and matchsticks on standby. Cyclone Management 101 had been meticulously rolled out at our home by the beach in Puducherry.

It was November 25, 2020, and the very severe cyclonic storm Nivar was to make landfall late at night, just 30km north of us, with windspeeds reaching up to 145 kmph. In a year that caught the whole world unaware, this sort of preparedness against the natural world lent an immense sense of achievement. Wait up, Covid-19; bring it on, Nivar!

I have lived and grown up by the beach—or more precisely what was once a beach, but is now a seawall of granite rocks—in this sleepy, former French colony where life only gets as busy as it can between the morning filter kaapi, the afternoon siesta and the lazy, evening game of boule.

Not so long ago, Puducherry had a fabulous sand beach all along Goubert Avenue. However, an ill-planned fishing harbour just south of the city blocked the natural movement of sand that nourished the beach, leading to its erosion and eventual disappearance in just a couple of decades.

And it is on cyclonic nights like these, when one can clearly hear the ominous, rhythmic crashing of waves despite all the doors and windows of the house being shut, that I miss the beach even more.

There is much more to a beach than being just a spot of recreation. It acts as an effective physical barrier against extreme weather events, which, although normal in the Bay of Bengal at this time of year, are becoming abnormally more frequent and severe as a consequence of the warming climate. A hotter climate leads to warmer oceans, and this in turn affects ocean currents in a way that leads to higher chances of cyclones forming in the tropics. And now, without a beach, us Puducherrians are without our frontline warrior, our first responder against such storms.

I remember being taken to the beach from kindergarten, building castles and moats in the soft beach sand that was at least 30 metres wide. Later, as we grew up, Sunday mornings consisted of playing tennis by the beachfront courts, followed by a refreshing swim in the sea and walking back home—across the street from the beach—dripping wet, the sea salt still on our lips, the sand still clinging to our hair and feet.

Not just Puducherry, but coastal communities worldwide are at the frontier of climate change, and while we may not be as vulnerable as those in the Sundarbans, Venice or the Maldives, there is no doubt that rising sea levels, warming oceans and more frequent and extreme weather events will affect us too.

In fact, they already are affecting us. Within a week of Nivar slamming into the Puducherry coast, the severe Cyclone Burevi made landfall to the south of us and brought torrential rains. Two back-to-back cyclonic events of this scale, within a week of each other, are definitely not the usual fare.

In his recent Netflix documentaries, Our Planet and Life On Our Planet, a 93-year-old David Attenborough talks of the catastrophic effects of unbridled human activity and climate change on our planet, something he has witnessed first-hand in just one lifetime. I may be just a third of the nonagenarian’s age, but it does make me sound pretty old when I say that in my brief lifetime, I have seen the beach disappear from my town, leaving it that much more vulnerable to the vagaries of climate change.

We are in that unenviable position in Puducherry where years of local mismanagement and a now aggravating global phenomena will combine to affect us in ways that we cannot even imagine. Saltwater intrusion in our groundwater; damaged standing crops; loss of property, life and livelihoods for the fishing communities; depleting fish stocks and shortened fishing seasons….

The morning after Nivar hit Puducherry, my wife and I biked around town, curious to assess the damage. The streets were littered with leaves, several uprooted trees and broken communication lines, but thankfully the damage to life and property was minimal.

We stopped by the seaside KBS Kofi Barr; the old uncle gave us a smile of recognition and served our filter coffee in our usual steel tumbler and bowl—not the ceramic cups used for tourists. No sugar. A flourish of extra coffee liqueur over the steaming milk. A subdued sun was already out and so were the people, picking up their lives from where they had been briefly paused, unaware as yet that another storm was already in the making and coming our way.

—Arpit Kothari is a businessman from Puducherry.

According to the Indian Meteorological Department, the number of cyclones in the Arabian Sea and the Bay of Bengal has increased by 11 per cent in the last decade. Scientists say that high sea surface temperatures are making the cyclones more powerful and rising sea levels are increasing their reach.