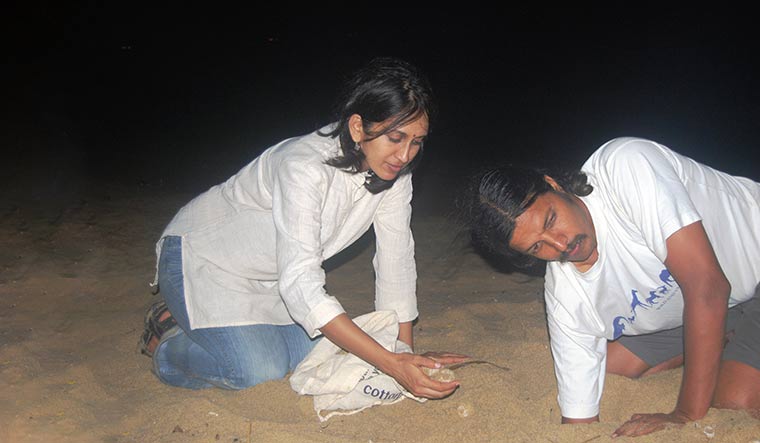 Egg hunt: V. Arun with a fellow conservationist during a turtle walk.

The night was dark, but the air was full of excitement. I was on my first turtle walk 23 years ago. The scouts walked in front, looking for tracks by torchlight. We were told that if the scouts flashed the light once, it was to indicate a nest, and if they flashed it multiple times, it meant a turtle was nesting. We were brimming with anticipation, our eyes fixed on the ground, when, suddenly, our team leader pointed to what seemed like a turtle in the water. “You guys are super lucky,” he told us. Unfortunately, it turned out to be a dead turtle; it was snagged in a fishing net. It took five more turtle walks before I found my first nest, but I was hooked for life.

Olive Ridley turtles nest on our beaches at night each year, between January and April. During this season, we go on turtle walks searching for their eggs, which we relocate to a safe place, to guard them from poachers, littering, weeds and other threats. When the turtle hatchlings emerge 45 days later, we release them safely into the sea.

In the early years of my walking, there were many dark stretches, which we used to refer to as ideal stretches, for the turtles to nest. This was because they had broad swathes of sand with no other encroachments or disturbances. Initially, I was quite troubled by the fact that we humans were interfering in a process that was millions of years old, trying to “help” the turtles by removing and re-locating the eggs to a safer place. I remember convincing the senior members to leave the nests which were laid in these ideal stretches as they were, without removing the eggs. In 2000, we left intact around 15 of the 83 nests that we found.

We were also hoping that with the spread of education and awareness, we could eventually make the beaches safe for the turtles to nest without having to relocate any of the nests. However, this dream fast disappeared with continued development on the beaches—new buildings, resorts, temples, and powerful mast lights and street lights. Soon, the ideal stretches disappeared altogether.

On the one hand, the turtle walks were getting more popular with more people attending them and our pool of volunteers were at an all-time high. This meant we could do more efficient monitoring of the beaches. On the other hand, the lives of turtles were not improving. In 2005 we got a shock. While we had a relatively good season, the summer came early and was the harshest one we had experienced at the time. We lost the last three rows of 30 nests, without a single hatchling emerging from them. It was a huge blow and we were greatly disheartened. That brought about another intervention. We covered the hatchery with jute in March to protect the nests from overheating. This continues till date and it has become quite widely practised across many regions.

Another strange development happened one night in March 2008. During a public walk, we were all watching a turtle digging her nest hole. But the process seemed to go on much longer than usual. She kept on digging, and after a long time, left without completing her nest. By itself, this is not such an unusual occurrence. But when we examined the holes, we found them to be dry, without any moist sand. We figured that the extreme temperature had dried the sand and this resulted in her being unable to complete the nesting process. That was indeed new behaviour.

Though we work with sea turtle conservation, our work is restricted to the little that we can do from the shore. These are our observations from the beaches of Chennai. We do not know about the kind of changes the turtles are experiencing in the ocean. Have the ocean currents they depend on altered? What other aspects of life have changed? We do not know. The sea turtles are very precious to me, and in a way, my happiness is tied to their survival. Sink or swim, we do it together.

The Olive Ridley turtles are recognised as ‘vulnerable’ by the IUCN (International Union for Conservation of Nature and Natural Resources) Red list. It has recorded a decline of between 30 and 50 per cent in their global population.