Climate disasters have turned from newspaper stories to personal experiences 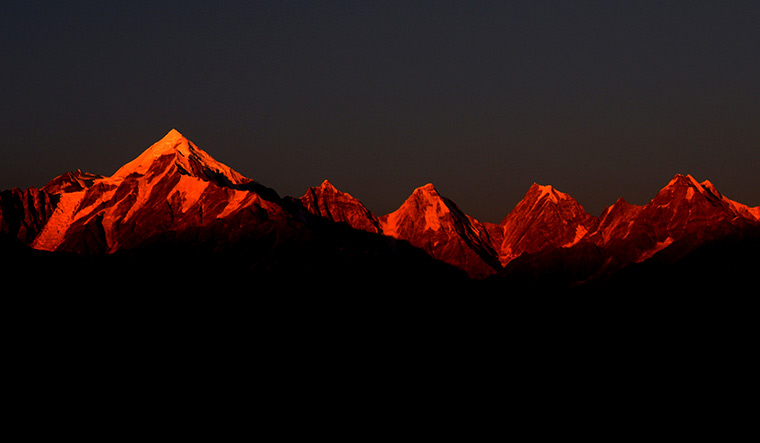 Twelve men walked into an underground tunnel at Tapovan in Uttarakhand’s Chamoli district on the morning of February 7. Three hours later, pandemonium broke loose when they heard the whoosh of rushing waters. Soon, the tunnel entrance was flooded and they were trapped around 350 metres from the entrance. Hanging on to iron rods on the tunnel walls or clinging to the top of an excavator, the men watched as the water level climbed. As hours passed, they started shivering in the cold and hummed songs to keep their spirits up—romantic ones, classics, and, as hope began dulling, tragic ones.

Seven hours later they were rescued by the Indo-Tibetan Border Police (ITBP) after one of them found network in his phone. Others were not as lucky. At least 62 people lost their lives in the Uttarakhand flash floods, believed by many to have been caused by a landslide. Many scientists agree that climate change played a significant role in the floods. “High mountain rocks are often heavily fractured,” says senior climatologist Kailash Pandey. “These fractures are filled with ice, which glues the rock mass. Global warming is causing this ice to deteriorate, which is weakening the rock mass leading to these big slope collapses.” According to him, in the last 60 years, Uttarakhand has witnessed an increase of 0.6 degree Celsius.

It is not just in Uttarakhand. Everywhere, the planet is rebelling. Just last year there were bushfires in Australia, locust swarms in east Africa, windstorms Ciara and Alex in Europe, Cyclone Amphan in the Bay of Bengal, floods in China, India, Pakistan, Vietnam and Japan, the Siberian heat-wave in Russia, and typhoons Goni and Vamco in the Philippines. According to a 2015 report by the Asian Development Bank, in four decades the frequency of natural disasters recorded in the Emergency Events Database has increased three-fold, from 1,300 events in 1975-1984, to 3,900 in 2005-2014.

Perhaps not in catastrophic proportions, but each of us has experienced climate change in some form or the other. To bring home its impact, THE WEEK prepared seven experiential stories exploring climate issues, not from a scientific or an activist point of view, but through the lives of ordinary people like you and me. A young mother writes about the idyllic Delhi she grew up in and the one ravaged by pollution and extreme weather conditions in which her children are being raised. A businessman writes about his beloved Puducherry falling victim to frequent cyclones and coastal erosion. A space researcher writes about witnessing the melting glaciers of Ladakh during a research trip to compare weather conditions there with those on Mars.

“My 35-year-old son is mentally ill and bed-ridden, and one of my daughters is partially lame,” a man who lost his home in the Kerala floods of 2018 told me. “We carried our son, holding him high above the water, to the neighbour’s home. Our daughter was taken in a chair. The next day, water got into the neighbour’s home also. Then, an ambulance came and took us to the house of the neighbour’s relative. We did not pack or prepare in any way. We got out of our home with nothing but the clothes on our back. I wore a baniyan and a lungi. I did not even have slippers—they had floated away in the water.”

N.H. Ravindranath, retired professor, Centre for Sustainable Technologies, Indian Institute of Science (IISc), says that the biggest recorded evidence of global warming in India is related to changes in rainfall patterns. Extreme events like floods in regions like coastal Karnataka and Kerala and droughts in those like Vidarbha and Marathwada have multiplied. “In my travels around India, one thing farmers tell me is that the rainfall pattern has become unpredictable,” he says. “You get rain in south India around Christmas, which is bad since it is harvest time. You get rain in April, when the summer crop is ready. This means that farmers do not know what crops to sow when.”

According to him, India is ill-prepared for climate disasters. “On paper, every district is supposed to have disaster management plans, but in reality there are no such plans,” he says. “Also, relief after a drought or flood comes very late and very little of it reaches the farmer.”

For the vast majority, climate change is something that has been happening over millennia. Perhaps another two or three millennia later, the world might come to an end, but we will be long gone by then. But this is a myth. More damage has been done to the planet in the last three decades than in all the centuries that came before, writes David Wallace-Wells in his book, The Uninhabitable Earth. “The story of the industrial world’s kamikaze mission is the story of a single lifetime—the planet brought from seeming stability to the brink of catastrophe in the years between a baptism or bar mitzvah and a funeral,” he writes. According to him, if things continue like this, the planet would have heated up by more than four degrees Celsius by 2100, rendering large parts of Africa, Australia, South America and Asia uninhabitable.

If we are not careful, we might just give the green light to Project Extinction.