Climate change has a devastating impact on melting glaciers 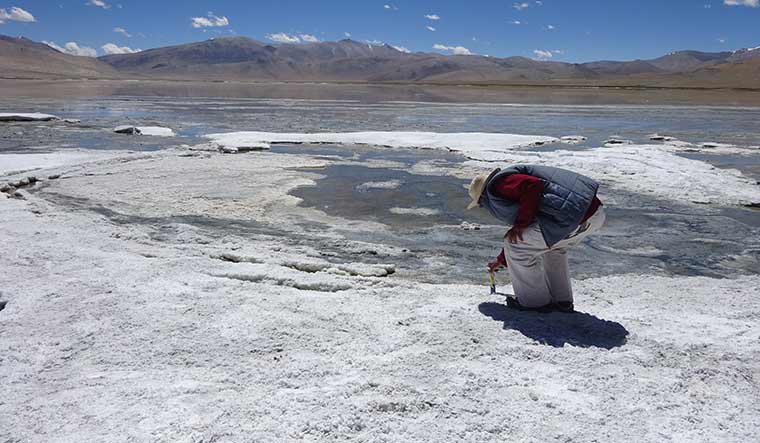 Freeze frame: Siddharth Pandey during a research trip in Ladakh.

It was 3am as my cab pulled into the Mumbai airport. I was travelling to Leh on a one-week assignment in preparation for our science team’s expedition to the region in July 2021. My team of space researchers has been testing and developing technologies for space exploration, testing them in Ladakh’s unique cold, high altitude regions that mimic conditions on early Mars.

At 8am, as we flew over the inner Himalayas, the flight cabin was filled with excited chatter, feverish camera clicks and gasps, as the snowy peaks and crystal blue lakes of Himachal Pradesh revealed themselves. Ironically, what seemed surreal and majestic to the others made me tremble in despair. I noticed how several large glacial stream beds were completely dry and ice-free. Freshwater lakes had receded in size. If climate change was a horror play, I was watching it playing out on stage.

Right before landing, the plane soars over the Leh valley. The conventionally barren, cold and dry region is now thrown off balance by the rapid urbanisation. The consequence of this misbalance is yet to be fully understood, but the changes in local microclimate, flowering, harvest seasons and appearance of pests have befuddled local farmers. Several agricultural fields have turned barren due to unavailability of irrigation water from glacial streams.

The dependence of farmers on commercial insecticides has also gone up, leading to the introduction of toxic materials in soil, water and plant crops, something that was unheard of a generation back. But what is most striking is the rapid increase in the number of resorts, many of which are now operational throughout the year. Ladakhis who have, for generations, been dependent on glacial water for their livelihood, are now digging bore-wells, tapping into a limited ground water resource to sustain the growing number of tourists.

The plane lands roughly in Ladakh. When the doors open, the cabin air escapes out, and it feels almost like landing on another planet. This is because Ladakh is 3.5km above sea level, where the air is only 70 per cent as dense as it is in Mumbai.

My work took me from Leh to Tso Kar, a high-altitude wet basin, about a four-hour-drive towards Manali. This is where Amity University, where I work, is collaborating with partner organisations to establish a research and education camp next year to support Mars exploration and climate change studies.

When we drove through Saboo, a village 7km from Leh, the epicentre of the flash floods of 2010, we could still see several half-buried houses. Efforts are on to reinforce the stream banks and bridges. On the way up via Taglang La, a high pass 5.7km above sea level, I observed dried-up glacial stream beds with the top completely ice-free. Very little snow and rainfall was received this past year. However, there were cases of short but strong bursts of rain in several regions. We arrived at Tso Kar (Tso means ‘lake’ in Tibetan). This was an important salt mining site where travelling traders would collect and sell salt. But the drop in precipitation and increasing temperatures have led to the lake shrinking.

Tso Kar, being a white salt deposit with green meadows, does not have the same crystal clear turquoise blue waters of Pangong Tso or Tso Moriri. Therefore, it attracts fewer tourists. But for nature lovers, climate scientists and now, a few space researchers, the site is a natural observatory. Though differing in our scientific objectives, we share a common responsibility to monitor the changing environment and traverse it sustainably. We are planning to install weather monitoring stations to record temperature, relative humidity, and wind speeds around the lake. More frequent trips are scheduled to monitor the changing soil, water, and ice chemistry.

Opinions and observations about the changing climate in Ladakh varied with the region and age of the people with whom I interacted. Ali, our driver in his late 20s, spoke at length about the increasing number of Ladakhis leaving agriculture for jobs in travel and hospitality. “Our focus is mostly on human-centric problems and less on our environment. One has to really stop and think to see what really is happening to our ecology, vegetation and weather,” he said. “I have memories of a lot more snow in our villages and the fresh water streams have definitely changed flow paths, but they are still flowing, which is a good thing, right? There seem to be many more irrigation plants, so it seems that the government is working on it.”

Over a welcome cup of hot tea at one of our stops, we met Taji, a grinning old man who had lived in Tso Kar all his life. He spoke in feverishly fast Hindi about how the high plains had seemed half a century ago. “The plains looked quite the same, but it was a lot colder,” he said. “We would get more rains and the lakes were less salty. We would see a lot more migratory birds. I suppose you have tasted the salty water here? We consider our lakes holy and do not step into them. My ancestors would help large salt trading groups who would pass through the region.”

Over the last few decades, warmer temperatures in South Asia have led to an unusually high rate of melting and evaporation. The Himalayas have an uneven terrain because of which the effects of climate change are localised, but severely amplified. A recent study indicated that 85 per cent of the Himalayan glaciers will melt completely in the next 80 years.