For the last 10 years, drought has come to stay in my village in Uttar Pradesh 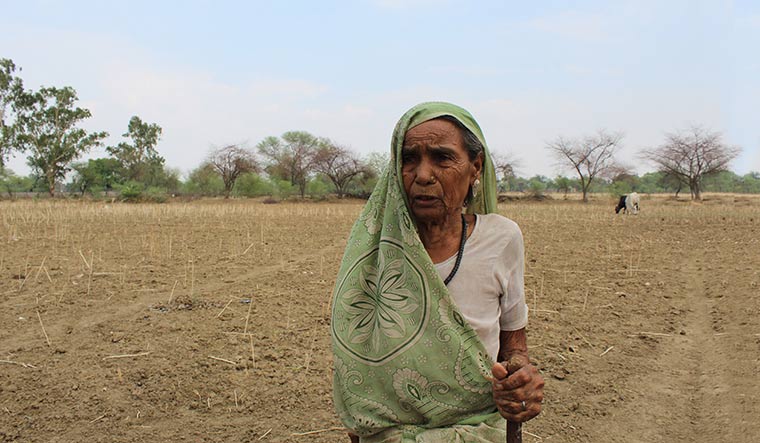 High and dry: Muliya Kushwaha in her field | Puja Awasthi

It was my father-in-law who settled in Beni ka Purwa village. I came here as a 12-year-old bride. I got no schooling but, since my childhood, I have worked in the fields. So farming has been my life.

Now, everyone says there is no water in the village because the gods are angry. But when I came here, the rains would come like clockwork. There would be so much rainwater that people’s homes would be flooded. Some kuccha houses would also collapse. People would take shelter in the local temple. I would have to drag myself through the slush to get to the fields. There would be water as far as the eye could see. The rains would come down so hard that even the bunds around the fields would be swept away. I remember once, in 1995, one kilometre of the railway track (which passes through the village) was swept away.

For the last 10 years, there has been an unending stretch of drought. Crop production is falling. Earlier, we could just strew the seeds on the fields and they would grow in abundance. Now, no matter how much fertiliser you use the crops just do not grow as much. And whatever grows has no taste.

In July, when the rains came, there would be no need to irrigate the fields. Four months of rain left enough moisture in the ground for the crops that grew in September and October. The rice was planted at just one foot in the soil, wheat at two-and-a-half feet, and on the boundaries of the fields we would grow arhar (yellow pigeon peas) and chana (split chickpeas).

When my son-in-law introduced the idea of using fertilisers to me, I was aghast. “How can you not trust the powers of the land? Has it not always fed us?” I asked. But he insisted we try just one kilogram of it. Now, you use sacks of fertilisers and the crops still do not grow as well. When there were enough rains, the wheat was juicy. Now, it is shrunken. It has no nutrition. We grow almost no masoor (red lentils) now, as the soil does not support it.

There is a portion of our fields where we do not use fertilisers. That is where we sow the crop for ourselves. I do not like the taste of what grows now. The grains I grew up eating—kodwa (similar to rice), kakun (wheat-like with longer ears) and sama (a coarser form of millet)—no longer grow. My grandchildren do not even know the taste of it all. They say it was the food of the poor. But we did not fall sick eating that food. For the last 15 years I have not eaten wheat, because it does not taste like the wheat I used to eat.

When our water came from the rains, the wells and the ponds, our pulses would cook so quickly and turn out so soft. Now, everyone uses a pressure cooker. Modern people might say the use of fertiliser is vikas (development), but it is vinaash (destruction). Fertilisers carry diseases and these go into your body.

I do not know why the rains stopped. But we have disrespected the earth. When tube-wells came, we started to pump water from 50 metres. We gave nothing back. Because water was available so easily, we stopped storing it. We lost our wells and ponds. When we respected the earth and water, we kept our wells clean and looked after our ponds. Going to collect water, wash clothes and bathe was an opportunity to meet, talk and laugh. It was almost like a mela (fair). New brides were first taken to these water sources before being brought home. Now you turn on a tap to get water. And what if the tap fails? You could once dig anywhere in this village and find water. Now I hear that borewells are failing all the time. (Because of the depleted groundwater, they have to be sunk deeper).

Farming was sacred to us. We would worship the plough and the oxen. We would light diyas before the seeds and break a coconut. And then start the sowing. It was almost an act of prayer. The ploughs would mix up the soil very well. Now, tractors are used and the soil is not churned as well. We would give the oxen rotis smeared with ghee (clarified butter). Now, youngsters would rather not be farmers.

We had 15 buffaloes and 12 cows. There was a separate farmhand just to look after them. But when the rains stopped you could not find enough fodder to feed the cattle. So people have fewer livestock now.

I walk to my fields every day. And I sit by the side of the empty well and think of those days gone by. We changed everything. We thought we knew better than the earth. You need to forge a relationship of respect and submission with nature. If you do not do that, why should nature give you anything in return?

Muliya Kushwaha died on December 10, 2020, after she slipped and fell in the courtyard of her home. She was 89 years old.

—As told to Puja Awasthi

Global warming causes an increased evaporation of water from the soil and an earlier snow melt, resulting in more severe droughts. Research by NASA states that, “humans have been influencing global patterns of drought for nearly a century”. According to a 2018 government report, 600 million people in India face “high to extreme water stress”.