Sagarmala could create one crore jobs in the next decade 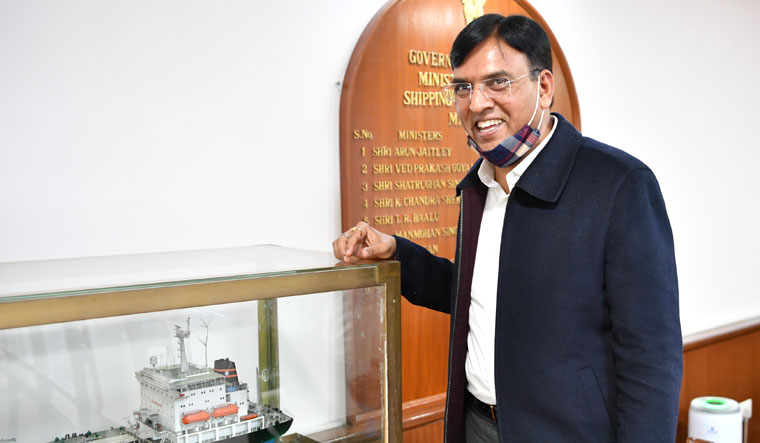 Mansukh Mandaviya, Union minister for ports, shipping and waterways, wants to connect the country's coastal and inland waterways. The various projects under the ambitious Sagarmala Programme—26 of them being undertaken on a priority basis—aim to accelerate port-led infrastructure development. These could create one crore new jobs, including 40 lakh direct ones, in the next 10 years.


Can you tell us more about the upcoming maritime museum complex in Lothal?
The museum, one of the ambitious projects of the prime minister, would display India’s rich maritime culture that goes back to Harappan times.
The Gujarat government recently transferred close to 400 acres in Saragwala village, close to the Harappan site [of Lothal]. It is our endeavour to highlight India’s rich maritime heritage and navigational knowledge, combined with modern technologies. We are trying to re-create the Lothal civilisation through this museum. The National Maritime Heritage Complex would encompass all aspects of history, [including] the present trends of boat technologies and shipbuilding, and the futuristic vision in the maritime domain. The concept design for NMHC was approved in February 2020. Currently, the selection of a design and construction contractor is in progress, and we are hoping to start construction by March (2021). We aim to complete it in two years. Though the initial budget is Rs500 crore, it might be more as we are trying to get the best in the world.

You have said that the Sagarmala Programme will harness India's 7,500km coastline. Could you elaborate?
It is the ministry's flagship programme to promote port-led development by harnessing India’s 7,500km coastline and potential navigable waterways. The projects [under the programme] could create one crore new jobs, including 40 lakh direct jobs, in the next 10 years. The vision of the programme is to reduce logistical costs and time for the movement of EXIM (export-import) and domestic cargo. [The] development of industrial capacities near the coast is a step in this direction. Port development, port-led industrialisation, port connectivity and port community development are the four pillars we are working on.

You have called the creation of a National Port Grid, under the Indian Ports Bill, 2020, a game-changer.
On our entire coastline, there are 204 ports but only 69 are functional at present. Under the National Port Grid, we are trying to bolster structured growth and sustained development of ports. It would be a game-changer [as it would] cut down logistical costs of India's exports. The average logistical cost [of trade] through sea is 9 per cent worldwide; in India it is 14 per cent. The National Port Grid [would reduce costs by] encompassing various smaller ports like fisheries, agriculture and mineral ports. It will also bring in more investments. There are 505 ongoing projects on port modernisation, port connectivity, port-led industrialisation and coastal community development, at a total cost of Rs3,56,648 crore.

What are the new reforms being planned for the maritime sector?
[The] Indian Ports Bill, the Merchant Shipping Bill [and] the Inland Waterways Bill. The Aids to Navigation Bill (concerning lighthouses) is also expected to be presented in the upcoming Parliament session. All these legislations aim [to improve] ease of doing business.

It has been priority to harness the navigable waterways for ferry connectivity through RoRo (roll-on/roll-off, for vehicles) and RoPax (roll-on/roll-off, with passengers) vessels. The ministry facilitates ferry operations by creating necessary infrastructure and navigational channels. We have recently floated an expression of interest for such operations [in] Hazira, Pipavav, Okha, Mandovi, Mundra, Kandla, Dahej, Mumbai, Kochi, Paradip, Visakhapatnam and Chattogram (Bangladesh).

The new Merchant Shipping Bill aims to stop ships that threaten the sea and the environment. How does it address the growing issue of pirates taking Indian seafarers hostage?
The bill has been drafted to promote the Indian shipping industry by incorporating best practices adopted by advanced countries like the US, Japan, the UK, Singapore and Australia. We are following all protocols of the International Maritime Organization, of which India is a member.

Adequate provisions have been incorporated to ensure safety and security of vessels and safety of life at sea. The bill aims to bring in measures for the prevention and containment of pollution at par with the best practices prevalent in other jurisdictions, and goes a step ahead to include pollution of air resulting from ships operating at sea. Specifically, pursuing prosecution, securing conviction and establishing traceability have raised various difficulties. Therefore, the bill proposes various measures for monitoring and collection of evidence, and for admissibility of such evidence in [court] proceedings. This allows India to actively pursue incidents of pollution—within its jurisdiction and on the high seas—that might effect its marine environment.

What is the status of the Jal Marg Vikas Project, country's biggest inland waterways project?
This project will connect Varanasi to Haldia (West Bengal) and will be the biggest waterways project.
Multi-model terminals have already been made in Haldia, Sahibganj and Benaras. From Haldia to Sahibganj, 600km of waterway is operational. Close to 1,000 cargo vessels are plying in the stretch. We are expecting the entire project to be completed in the next two years. We are eyeing to push for coastal movement and coastal transportation as it will improve road traffic, and is cost effective, eco-friendly and accident free. A stretch of 1,400km of waterway has been fully developed and an additional 1,000km of waterway are being developed on a priority basis. Goods like foodgrains, fertilisers and minerals that are transported through subsided railway tracks could move through inland waterways.

There is also a need to preserve the marine environment. What is your ministry doing in this regard?
Marine pollution is a global challenge which is being taken very seriously by our ministry. We have recently introduced various bills, which will address this issue in totality. The recently introduced Indian Ports Bill 2020 and Merchant Shipping Bill 2020 have several international maritime conventions specifying pollution control standards, port reception facilities and port traffic flow arrangements. The up-to-date IMO conventions and protocols, and their adoption in to domestic law and framing subordinate legislation will address the issue of marine pollution. All ports and terminals are going to be prescribed by the central government under these proposed acts to ensure prevention of pollution at sea, so that marine environment is preserved.

Women have been part of the story of the sea. You have talked about bringing in gender balance in the sphere of maritime. How does the ministry aim to do so?
I have no doubt that women seafarers are as capable as their male counterparts, and for sustainable development, participation of women in shipping, both at sea and onshore, is equally important. The Indian Government is aggressively encouraging women seafarers to take up their career in this challenging field. The number of Indian women seafarers is increasing exponentially across the globe. The Indian Maritime University is giving special  fee concession to women seafarers.