Kalinga sailors rode the monsoon winds for over two millennia 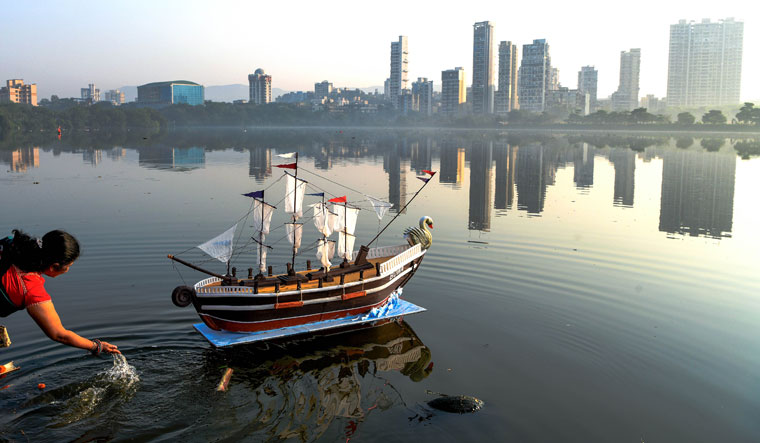 A voyage to the past: An Odiya community member in Mumbai celebrating the Boita Bandana festival, commemorating the maritime tradition of the Kalingas | Getty Images

Mornings in Bali begin with the name of a god in faraway India. The daily ritual of Buddhist priests starts with a prayer to Jagannath, renewing the Indonesian province’s link with Kalinga, the ancient empire which covered most of modern day Odisha.

“In Bali, Shiva is also worshipped as Jagannath…,’’ writes Patit Paban Mishra in his paper titled “Bali and Orissa: A Study in Cultural Interaction’’. Like the famous car festival of Puri, the Balinese, too, take out processions with masked wooden statues resembling Jagannath, Balabhadra and Subhadra.

The story of the kingdom of Kalinga in these parts has acquired the quality of a myth which is retold lovingly at every gathering and is passed down like an heirloom. The connection goes back centuries, and is really a testimony to India’s seafaring tradition. It all started from the coastal empire of Kalinga. But Kalinga today is remembered mostly for the massacre it endured at the hands of the Mauryan emperor Ashoka. The details are there in his carefully drafted, spin-doctored inscription, which says one lakh people were killed in the war, while many more died of wounds and hunger.

Before the conquest and the devastation, Kalinga was among the richest places in the world. It dominated maritime trade even before Greek navigator Hippalus discovered the monsoon. It had one of the longest surviving maritime traditions in the world. Kalidas’s epic Raghuvamsa refers to the king of Kalinga as the lord of the oceans. And, Kalinga’s conquest of Bali occurred in complete contrast with Ashoka’s sword-slash fest. Archaeological evidence confirms that there was flourishing trade between the two kingdoms.

It was the Odiya-Bengalis who hopped aboard a ship to take to the seas, leading to overseas trade and riches. The Chilika lake was a natural starting point of their voyages. Kalinga sailors had the knowledge of monsoon winds for over two millennia. They started trading with Southeast Asia and their boats hugged the coasts of Thailand, Cambodia, Vietnam and, finally, China. Then, they turned south into the Indian Ocean, sailing to Sri Lanka and further down to Indonesia. Even the Temple of the Sacred Tooth Relic in Kandy has a link to Kalinga. It is believed that Kalinga king Guhasiva sent the tooth relic through his daughter Hemamala and son-in-law Dantakumara to be handed over to his friend Mahasena, the ruler of the Buddhist kingdom of Sri Lanka. Hemamala hid the tooth in her hair and brought it safely to Sri Lanka.

Kalinga sailors would set out in November, relying on the gust of the monsoon winds to reach Bali by January. They would then have two months to do business and would return to their country via Sri Lanka, again aided by the winds.

The journey that began centuries ago finds itself repeated even today. Odisha celebrates the Boita-Bandana (worshipping of boats) festival where young women decorate miniature sailboats with little lamps, guava, raw rice, betel leaves and flowers to celebrate the Kalinga sailors. In Bali, too, a similar ceremony called Masakapam Kepesih is observed by floating small boats with burning candles denoting a return of the sailors to their home in Kalinga. The origins may have been forgotten, but the cycle continues.