Tied to the tide 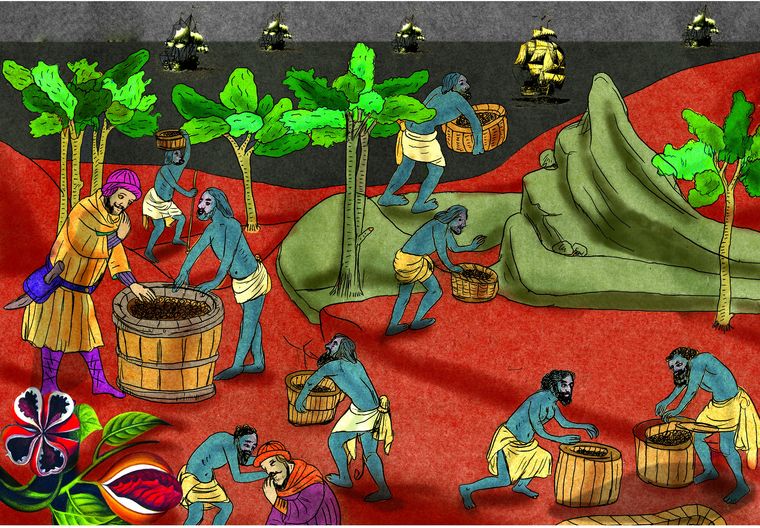 Donald Trump was not the first man to send out ships to assert his country’s freedom of navigation. (This summer, the US sent two aircraft carriers to the South China Sea to intimidate China). In 1025, Rajendra Chola I—the most powerful king in southern India—sent out ships to Srivijaya (now in Indonesia) to make a similar demonstration of power.

According to an inscription at the biggest temple in Thanjavur, the heart of the Chola dynasty, his ships raided Srivijaya and 14 other ports. The Chola raid has been woven into the larger nationalist narrative of India as a muscular superpower. However, the Cholas never actually took over Srivijaya. Newer research suggests that the reason to invade was not expansionist, but rather a commercial one. “The Cholas were interested in maintaining free maritime lanes,” says Dennard D’Souza, a young researcher at the Maritime History Society in Mumbai.

The Chola invasion illustrates that, whatever the century, trade rivalries can be fierce. And India, exposed to water on three sides, has a rich maritime past. The Chola raid was just one chapter of a vast book of stories.

“The history that we have taught and written has implicitly accepted that there was a caste restriction to sailing across the ocean,” says scholar Himanshu Prabha Ray, the grande dame of maritime history. “This is, however, something that came up only in the 19th century—the notion of kala pani (a taboo of the sea). But it also ties into the post-economic (elitist) structure in which history has been written, which is why the only space it provides [to maritime affairs] is [related to] trade. It does not provide for maritime history, the notion of mobile communities travelling for not just trade, but also for religious purposes or just for the resources of the seas. There is a lacuna.”

India is hoping to change that. In 2023, at Lothal in Gujarat, there will come up a grand museum complex to celebrate India’s maritime history. In the 21st century, with land rivalries being pushed to the sea, the museum will not only be about identity, but also about geostrategy. The Quad (a grouping of India, Australia, Japan and the US) and the tensions in the South China Sea have made this the perfect moment for India to recall its maritime past.

“There are nearly 40 countries on the Indian Ocean rim that have been connected to India,” says Vasant Shinde, director general of the upcoming museum. “There was the transmission of culture, languages and religions. It started almost 5,000 years ago at Mehrgarh, which is now in Pakistan.”

The interest in retelling the maritime past is also a landmark in other ways. For the first time, India will hope to narrate the story of the sea as an active participant. Not through western eyes. It will be, to use a buzzword of the current government, an atmanirbhar retelling. The moment when Columbus finds America is such a dominant moment in world history that it is forgotten that the Indians and the Arabs were navigating the seas before that, says Aparna Kapadia, a historian who teaches at Williams College, Massachusetts.

It is the aam aadmi story of the sea that is fascinating. It is the story of merchants, navigators, shipbuilders, mercenaries and even slaves. Buddhist nuns, ordinary Muslim pilgrims, rich princesses, they all travelled. Ram Singh, a navigator who was rescued from a shipwreck in the 18th century, had spent more than a decade in Holland before returning to India. All these previously invisible seafarers will now get a chance to have their stories told. It is also a chance to showcase the knowledge that Indians could navigate the seas well before Vasco da Gama came along. Apparently, da Gama’s guide was an Indian navigator.

The Malam-ni-Pothis, diaries kept by Kutchi navigators, are a testimony to India’s ancient knowledge. In colonial Mumbai, a team of bright young researchers from varied fields is helping translate a few such diaries at the MHS. The Indian Navy, under which comes the MHS, has been trying to use the history of the waters it protects to instil pride in Indians as well as to craft a story.

There are vessels named after rulers who left their mark in naval history. Rani Abbakka Chowta, who fought the Portuguese, has a vessel named after her. The dockyard in Fort, Mumbai, is named INS Angre after the
Maratha admiral Kanhoji Angre. The Navy also recreated the route of the Chola expedition a few years ago.

“They (the Kutchi diaries) are navigational documents and reference points,” says MHS director Commodore O. Johnson. “They note planetary positions, they give you the colour of the sea.”

The diaries are written in code, without punctuation, and the MHS researchers are working patiently to decipher them. “This knowledge system was passed orally,” says Andre Baptista, an archaeologist with the MHS. “But it established that seafaring was active.”

In 2015, Prime Minister Narendra Modi released some of these Kutchi guides.

In 2014, the government started Project Mausam—from the Arabic word mawsim—to make old maritime connections tangible. It wanted to connect the countries on the Indian Ocean. The idea, says Ray, who headed the project for years, was to cement these links through joint research across the seas. This was the beginning of the growing interest to use history for geostrategy. 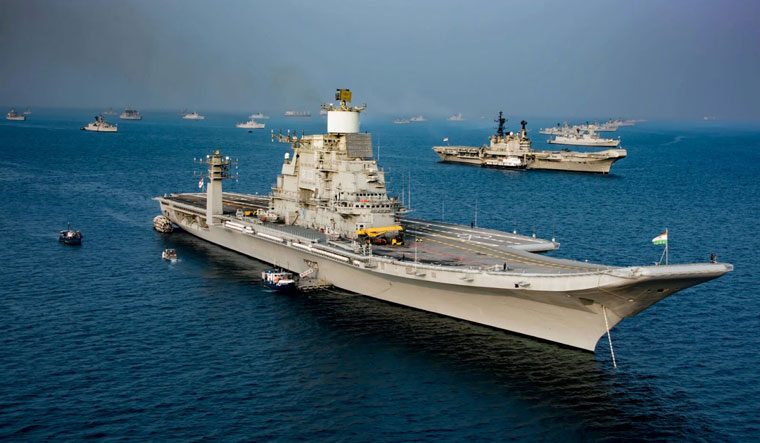 Show of strength: INS Vikramaditya. The Quad and the tensions in the South China Sea have made this the perfect moment for India to recall its maritime past | Sreekumar E.V.

The idea of India as a maritime power is not new. The diplomat-historian K.N. Pannikar had floated the idea of a maritime consciousness in the 1950s. But it is only now that India is trying to cash in. Former ambassador T.C.A. Raghavan says, “The fact that the Indian Ocean has become [a point of contention], especially with massive Chinese investments, is the strategic reason we have focused on maritime history. There are also economic reasons. We have not paid attention to marine resources. Only last year a separate department of fisheries was set up. The whole idea of the blue economy and concerns of climate change have come together. We know maritime heritage, but the connections have been lost.”

To renew such connections, the ministry of external affairs has started a new Oceania desk to push for interaction with islands beyond Australia. There are conservation projects in the Maldives, and Overseas Citizen of India Cards for descendants of indentured labourers going back six generations on Reunion Island, a French region in the Indian Ocean.

“At the geopolitical level, there is a powerful push from China,” says Ray. “It is not only being pushed by hard-nosed diplomacy, but also by the Belt and Road Initiative. In a certain way, that initiative is founded on the funds that China is providing to different countries to do research on shipwreck archaeology, find shipwreck sites and find Chinese material artefacts. It is not just talking in thin air. It is about finding tangible Chinese links to their history.”

This transforms China from an outsider into being essential to the identity of the country. And so, India will need to tell its story of collaboration more forcefully. Especially with Southeast Asia, where India is hoping to counter China. This is where India has an edge; its connection with this part of the world is much older. It extends from textile traditions to songs, stories and myths.

There is also the link to West Asia. That India was trading with Oman is evident by the fact that, by the third or second millennium BCE, there was a route from the Persian Gulf to the Gujarat coast.

The Lothal museum is just the first step. It will take more research and fresher blood. The task is daunting, especially as the underwater archaeology wing of the Archaeological Survey of India shut down in 2011. India has fewer than five trained marine archaeologists. The MHS has one; the rest are close to retirement.

So, why are remains at the bottom of the ocean even important? The answer lies in the lessons from the Belitung shipwreck. Found in Indonesian waters in 1998, the dhow had a huge stash of Chinese ceramics. While it is still not clear whether the ship was Arabian, it was repaired in Indonesia. A wealthy Singaporean bought it for $32 million and wanted it to be salvaged and put on display. When Singapore wanted to send it out for an exhibition, the Smithsonian refused because it had issues with the way the ceramics had been salvaged. Yet, it now finds pride of place in Singapore, and has been used to propel the country’s narrative of being a melting pot.

The story and how it is crafted matters a lot. “It is very important,” says Ray. “At one level, we are trying to produce a counter-narrative. China’s narrative is powerful. It is the narrative that the Europeans have promoted since the 19th century. If we have to counter, we cannot just say that we have another narrative. Where is it?”

British novelist L.P. Hartley may have said that the past is a foreign country. But in geopolitics, since Harappan times, the sea has mattered. As have its tales. To use the Indonesian navy’s motto: ‘Jalesveva Jayamahe’. Which, in Sanskrit, means, “On the seas we are glorious”.