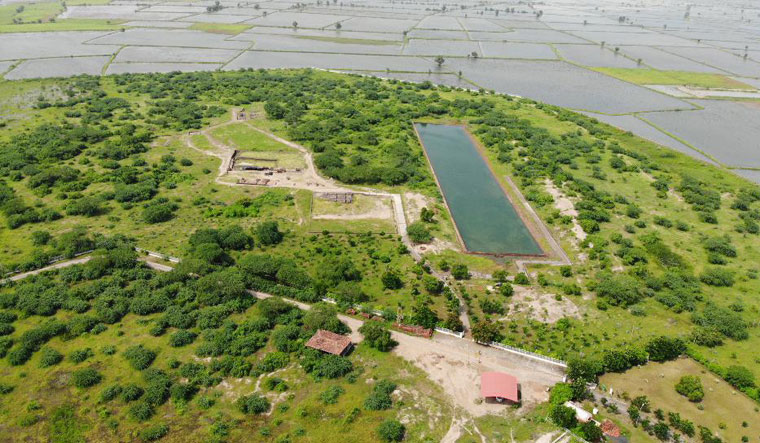 Past glory: One of the sites of the Lothal excavation

India needed a place to tell its tales of the ocean, and found the perfect fit in Lothal. The only excavated port of the Indus Valley civilisation is where the National Maritime Heritage Complex—part of the BJP’s grand vision for India as a great oceanic power—will take shape. “Maritime history is so huge,” says Vasant Shinde, director general of the complex. “We have not had a proper organisation of maritime history.”

One of the largest cultural projects in recent times, the 14-galleried museum hopes to add a whiff of sea air to the landlocked confines of mainstream Indian history. The site is a testimony to the origin of India’s inter-connectivity with the world, especially with regard to trade. “Harappans are credited with [building] the world’s first dockyard at Lothal,” says Shinde. “They are probably the pioneers of shipbuilding. We have three kinds of seals and some terracotta models at Lothal.”

The seals depict three kinds of ships. A dhow, which is still in use; a reed boat, which the famous artist Nandalal Bose put on page 182 of the original Constitution. “[Then] there is a flat-bottom wooden plank boat, which must be quite huge because it is ocean-going. It has a home as well as birds, which are needed to detect land,” says Shinde.

It is this past that the museum hopes to capture. It also hopes to showcase to visitors the sheer richness of the maritime contact India had. There will be new heroes; the Marathas and Kanhoji Angre will be stars, as will be the Cholas.

There will be an emphasis on trade and the coastal community. There will also be the exploits of the Indian Navy, especially its 1971 win and a focus on shipbuilding practices and navigation. Mythological stories, from Samudra Manthan to the Ram Setu, will also find a place there.

The complex, expected to come up by 2023, will have a museum, a research centre and a preservation centre. And, in this retelling of history, the focus will be on the spirit of community and of participation, rather than conflict. “There have been wrong ideas that there have been invasions of India and they (invaders) finished Indian culture and started a new culture,” says Shinde. “That is a myth. What we had was an amalgamation.”