There are numerous mentions of horses in the Guru Granth Sahib 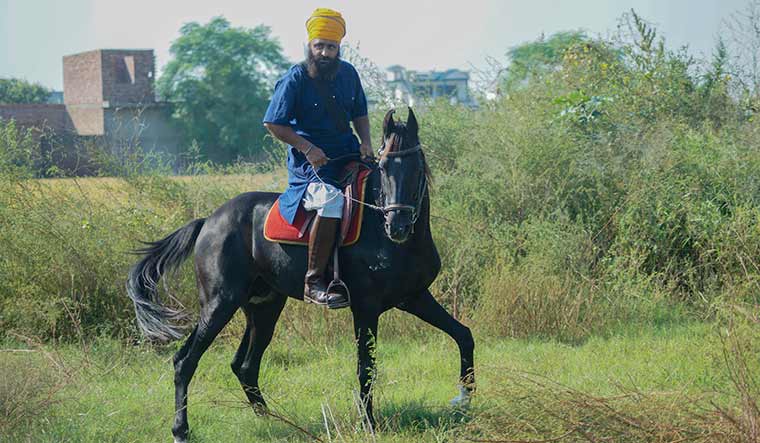 Nihang sardars who have been trained in modern equestrian sports

The importance of horses and horse-riding in Sikhism is perhaps best underlined by the description of Guru Gobind Singh—the tenth Guru—as the "neelay ghoday wallah" or the one with a blue horse.

The Sikh code of conduct, Rehat Maryada, is based on 52 hukams or edicts issued by Guru Gobind Singh at Nanded in 1708. He put his personal seal to the document, a copy of which is kept at the historic Gurudwara Paonta Sahib built on the banks of river Yamuna. Paonta Sahib town is in Sirmaur district in Himachal Pradesh—about 44km from Dehradun. These edicts sum up the ideal way of life of the Khalsa and serve as a code of conduct for the Khalsa Panth. Hukum 30 says: ‘Learn and train in the skills of weaponry and horse riding’. In fact, there are numerous mentions of horses in the Guru Granth Sahib.

One of the torchbearers of equestrian sport in India is Col. Sarpartap Singh—founding member of the International Tent Pegging Federation, vice president of the Indigenous Horse Society of India, vice president of the Punjab Equestrian Association, president Lakhi Sindhi Horse Breeders Society and a repertoire of both modern and traditional equestrian, speaking about the history of Sikh horse riders, told THE WEEK, “Col. Rupi Brar won India the first gold at the 1982 Asiad. Then there are Lt Gen Balbir Singh Sandhu—former captain of Indian team in 1971—Col. Pinka Virk in Polo, Subedar Patwant Singh, Col. Tarsem Singh Warraich to name a few. Some of the last few tent-pegging teams that have done well at the national level, have been from Punjab Police.”

Till the mid 1980s, large farm owners in Punjab would have stables. According to Col. Singh, the trend is back. “One can see some improvement there,” he said.

Col Sarpartap explained: “The horse is not related to Sikhism as such. The horse came into the picture only after the fourth Guru and then the tenth Guru Gobind Singh ji established the Khalsa Panth. That (horse riding) is related to the Khalsa part of Sikhism.”

According to Col. Sarpartap Singh, it was with the emergence of sovereign states—called misls—in Punjab post the establishment of Khalsa Panth, that Banda Bahadur created small groups of armies, including the mounted units, to fight invaders. Maharaja Ranjit Singh got all these misls together. There is the famous story of his horse Laili—the grey horse from Burkhazi which took 12 years to procure—that when it arrived, the streets of Lahore were washed with milk.

Within the Nihangs, Col. Singh said, “The Budda Dal looks after horses. It’s not too militant but more like protectors. Taruna Dal is more of a fighting force. The Nihangs have been frozen in time. They have not moved along with modern sports. So, while you get good horsemen among them, they are not conditioned towards the modern sport.”

Traditionally, Nihang horsemen showcase their skills in major events in Punjab every year—the Hola Mohalla and Kila Raipur annual sports festival. But beyond that, they are not in touch with modern equestrian sport—until now.

Two years ago, Col. Singh approached the SGPC to allow good mares to be donated to the Nihang order and potentially good riders to be trained by his team. “We set up a stable and training place at Fatehgarh Sahib. I feel some of the Nihangs will have a future. Any horse given to the Gurudwara in Amritsar is screened. If they are good for sports, they are sent to Fatehgarh Sahib”.

In fact, plans are afoot to hold a horse show of Nihang equestrian riders trained by Col. Singh and his team of coaches during the 550 years of Guru Nanak Dev's birth celebrations at Sultanpur Lodhi. “The idea is to create awareness among people that this is part of our culture.”