In the Guru’s footsteps

The Sikh faith is rooted in Guru Nanak’s teachings 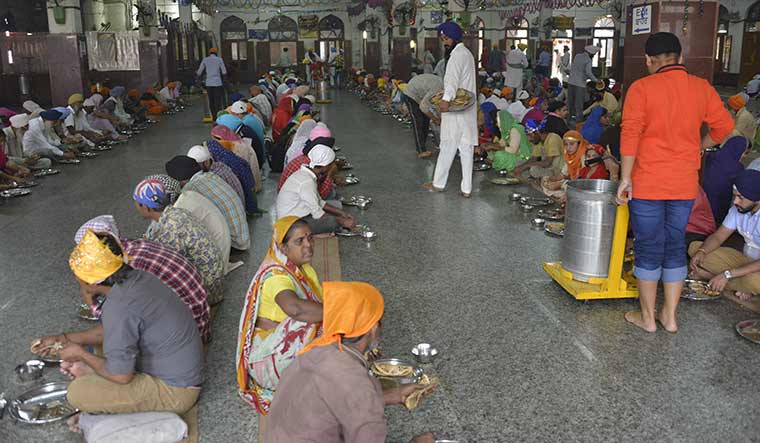 Spoonful of succour: Food being served at the langar hall at the Golden Temple in Amritsar | Arvind Jain

When Guru Nanak’s 550th birth anniversary is celebrated in countless gatherings this November, the following shabad [hymn] written by Bhai Gurdas, pre-eminent Sikh scholar and the first scribe of the Adi Granth, will no doubt find primacy:

When Guru Nanak appeared in the world

The mists lifted, there was light everywhere,

Two important aspects of Guru Nanak’s mission on earth are highlighted here. First, the society that he was born in was riven by ignorance and sin, corruption and oppression. The eternal spiritual truths had been lost in blind superstition and empty ritual. The guardians of faith, for their vested interests, had made religion moribund and inaccessible; external manifestations of religion, caste and sect were all that mattered.

Second, Guru Nanak saw himself as a messenger whose mission was to dispel ignorance, contradict falsehood and impart a practical and ethical direction to religion. The world was his canvas and his message intended for all mankind. His philosophy advocated a seamless life of belief, thought and action. He put forward this philosophy through his own example, his tireless travels in all directions for more than 20 years, his discourses with learned men of all faiths and through practical demonstration in the community that evolved around him in Kartarpur. Most of all, the eternal message is contained in his hymns sung in praise of the supreme reality.

While it would be overly ambitious to even summarise all his teachings here, certain cardinal principles could be highlighted.

Guru Nanak’s concept of the supreme reality, encapsulated in the Mul Mantra or the opening stanza of the Japji [prayer at the beginning of the Guru Granth Sahib], is of one God—the all-pervading Creator, fearless, without rancour, timeless, unborn and self-existent. He can be attained only by God’s own grace. The Creator created all existence, the extent of which cannot be realised by the human mind, but it is no dream. It is real; it changes, decays, dies and renews and is sustained by the Creator. 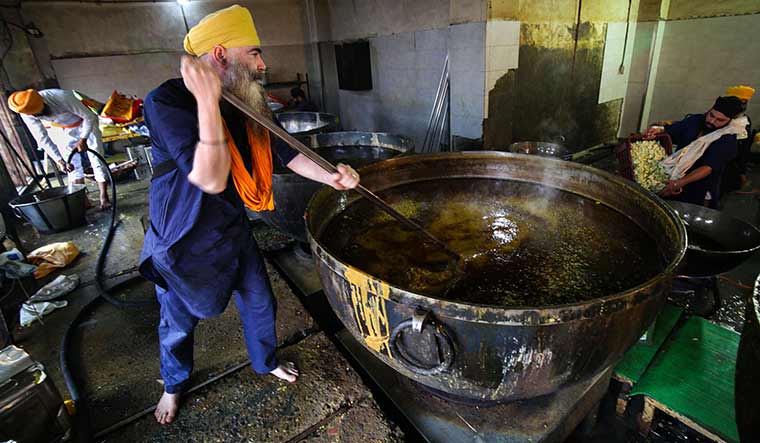 Food, Faith: Devotees preparing food at the langar at the Golden Temple | PTI

Guru Nanak believed that spiritual salvation of the soul is possible in this world itself and man need not wait for heaven for deliverance. God’s grace can be attained through contemplation of his name, and the five evils that persist in man—lust, anger, greed, attachment and ego—can be overcome.

The spirit of affirmation is an essential aspect of Guru Nanak’s teachings. The world is part of God’s creation and is a reflection of divine purpose. Man has to live in it above its impurities and ameliorate the human condition through love, compassion and service. Guru Nanak thus brought marriage and family within the ambit of religion.

Renunciation is emphatically rejected. Salvation is not to be found by withdrawal to jungles or meditating in snowy heights. Instead, one has to live in this world and yet be untouched by it like a lotus that remains dry in the water. This aspect of his teachings is brought out best in the Siddha Goshti, the verses that describe his meeting with several ancient sages in the mountains.

Guru Nanak stressed practical virtue over abstract piety. The principles in this regard are strikingly simple: kirt karo (do work), naam japo (meditate on his name) and vand chhakko (share in charity). Service, love and devotion are the essential requirements.

Naturally, it follows that Guru Nanak rejected formalism and orthodoxy in religion. Man’s inward journey was more important than ceremonial journeys and rituals. Guru Nanak’s purpose was to liberate the ordinary populace from the hold of the priestly classes, whose interest lay in making religion abstruse and inaccessible.

He underlined the essential equality of man and the irrelevance of the different castes, sects and religions that humanity had divided itself into. A man’s standing was to be determined by the deeds he performed. Men thus fell into two categories—Gurmukh (God-oriented) and Manmukh (self-oriented). Guru Nanak also protested the prevalent beliefs that gave an inferior position to women in society.

After his extensive travels, Guru Nanak settled down at Kartarpur on the banks of the Ravi. He shed his travelling garb and adopted the dress of a simple householder and showed in practical terms that renunciation and asceticism were not the answer to life’s challenges. True religious discipline had to be forged while living in the world, amid all its challenges and temptations, troubles and joys.

In Kartarpur, he occupied himself with vigorous work in the fields. He also wrote down many of the hymns he had already sung elsewhere, including the Japji. A community began to gather around him and grew steadily. Men of all callings and faiths—householders and ascetics, destitute mendicants and wealthy merchants, Brahmins and dervishes, Hindus and Muslims—came there, drawn by this message of piety and humanity. In the words of Prof Puran Singh, Guru Nanak “radiated love and faith and attracted people like light attracts moths”. This was not a monastic order but a fellowship of ordinary men engaged in ordinary occupations—farmers, artisans, traders and those who were considered members of the lower professions. They had all taken Guru Nanak as their guide and teacher.

A number of important traditions were started at Kartarpur, in particular the traditions of kirtan and langar, or in other words, sangat and pangat. The kirtan included the singing of compositions in praise of the Divine, received wisdom through the agency of the Guru. Sangat [fellowship] had a social implication as well—the creation of a brotherhood or fraternity. A member of the sangat was known as bhai or brother. The sangat brought together men not just in spiritual pursuit but also in worldly affairs, forging a community of purpose as well as of action, based on mutual equality and brotherhood. The disciples mixed together without consideration of caste or status; the sangat was thus a melting pot for the high and low.

The langar or the community kitchen is where the rich and the poor sit down in a pangat [line] to eat the same food irrespective of caste or social standing. A key element of this restructuring of the religious and social life was the spirit of seva or voluntary service—something that the Sikh panth [community of faith] is known the world over for today.

The society at Kartarpur thus became a precursor of historical Sikhism. Caste and empty ritual were its main rejections and its mainstay was a fervent faith in the Divine, ethical living and a full affirmation of life and creation. Its ideals of fraternity and brotherhood in sangat and pangat as well as of service and the recitation of bani [compositions] would prove to be essential elements of self-identity, established in Guru Nanak’s time itself and further crystallised by his successors. Ultimately, they would come to full flower under Guru Gobind Singh through the formation of the Khalsa.

The writer is a former diplomat and author of The Book of Nanak (Penguin India, 2003).