Kirtan was my anti-depressant

At the gurdwara, there is a congregation, and I do not feel alone 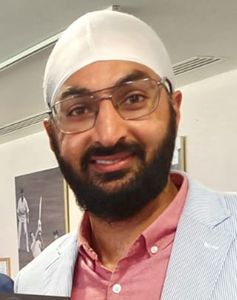 Sikhism is common in India. But in England, when you meet another Sikh, you give them the ‘Sikh nod’. Why? Because we think, “Oh yeah, he is a Sikh. He is part of a common group, a brotherhood.”

That is the difference. You feel a little bit closer in England.

When I first played cricket, people asked me why I had long hair. Others had long hair, too, but mine was because of my religion. There is a difference in looks and the name is longer, so you get these questions. When you play cricket together, you tend to get nicknames. Mine was Monty. My name is Madhusudan. If I was in India, they would say, “Ah! Lovely name.” In England, it is pronounced differently.

Identity is a big thing in England when you look different. People ask these questions because they are interested. Rather than avoiding these questions, I always found it easy to talk about my identity. In cricket, we have team environments and it is easy to accept those from different backgrounds.

The first shabad (hymn) in Sikhism is ‘Ik Onkar’, which means all are one. I give the analogy of a Christmas tree and its different coloured light bulbs. The electricity which flows through each light bulb is the same. Likewise, I explain to people here that ‘Ik’ is the life that flows through us and the light bulbs are you and me. We may have different-coloured hair or eyes but that electricity is the same.

While growing up, we were taught to do paath (recital of the scriptures) in the morning. We had to give a note in school when we had to leave an hour early on full moon days, which is pooranmaashi. That is the way my parents kept us connected to religion. When I am at home, I tend to do the paath. But when you are at games, you tend to focus on only the games. Cricket and religion have been two separate things for me. Religion is a way of life, the way we are brought up.

There were times when I moved away from my religion, when I had mental health issues. I started to drink more. When your mind is hitting a bit of a low, alcohol is like an anti-depressant. Then, I went to the gurdwara once, and just sat there and listened to the kirtan (communal singing). I wondered why my mind felt so relaxed then. This is how I would feel like when I was on my anti-depressant. If it was not for that experience, I would not have reconnected with my religion. I stopped drinking and became more productive.

I am not a really religious person. Loneliness is a breeding ground for mental health issues, but when I go to the gurdwara, there is a congregation. There is langar and seva. I do not feel alone. When I was young, it was my parents telling me to go to the gurdwara. As I get older, it is important from the point of view of being happy.

Panesar is an England cricketer with 50 Test caps.

—As told to Neeru Bhatia