The warrior in us 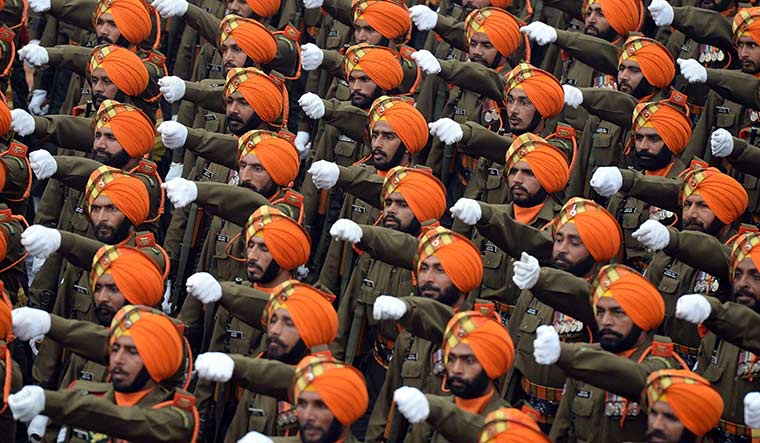 There is, I believe, a warrior in each of us. I choose to call this warrior the never-say-die spirit—the fighting spirit that comes to the fore when faced with any danger, be it repression, tyranny or cruelty of any kind that threatens our identity. It was the same warrior spirit that inspired my grandfather and my father to join the Army. It imbued in me the ambition to follow in their footsteps, which I proudly did, and which, to this date, I am honoured to own.

The Sikh warrior spirit can actually be traced back to the times of our first Guru, Sri Guru Nanak Dev ji. He was, in a sense, the founder of the Sikh martial tradition, as he gave the community strong spiritual and devotional moorings rooted in charity. He also gave the Sikhs a nascent identity, for which they were obliged to fight in times to come, and which remains an integral part of our existence to this date, even as we celebrate the 550th birth anniversary of the great Guru.

It was, however, during the reign of Guru Hargobind Sahib—the sixth guru—that this warrior spirit took the shape of militarisation. That was the time when the Sikh community found itself confronted with Mughal persecution. The watershed moment in Sikh history was the execution of Guru Arjan Dev Sahib [the fifth guru and the father of Guru Hargobind Sahib] at the hands of the Mughals in 1606. This proved to be a great motivator and rallying point in times to come. It was this that forced the largely pacifist Sikh community to take to the sword to defend itself. Realising that resistance by a strengthened community alone could guarantee their survival, Guru Hargobind Sahib started the process of military training and mental orientation of the Sikhs. Initial clashes with the imperial forces started during this period, giving the Sikhs some experience of warfare. As Mughal atrocities grew and intensified, so did Sikh militarisation. The martyrdom of Guru Tegh Bahadur Sahib [the ninth guru] in 1675 was the turning point. The deaths of two of their heads at the hands of the Mughals convinced the Sikhs that armed resistance was the only way out. Guru Gobind Singh [the tenth guru and Guru Tegh Bahadur Sahib’s son] conceived and implemented the idea of the militant order of the Khalsa—as a brotherhood of soldier-saints, pledged to invoke the name of the almighty, protect the weak, engage in charity and fight oppression. The distinct identity and appearance of the Khalsa ensured that they stood and fought, rather than take the easy way out. This moral binding added to the constant persecution by the Mughals and the experience gained in minor conflicts made the Sikh soldier what he became in the latter half of the 18th century—a war-winning force. For the next century, he was to remain in a state of relentless war, resulting in the Sikhs carving out an empire of their own. 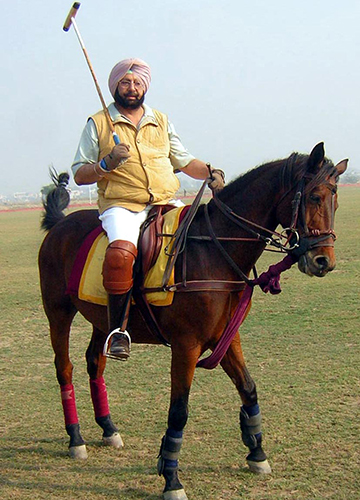 All in the family: Captain Amarinder Singh | PTI

The martyrdom of Banda Singh Bahadur, Guru Gobind Singh’s political and military successor, in 1716 added the proverbial fuel to the fire, further fanning the Sikh ‘warrior’ passions. Banda Singh Bahadur had already channelised the Sikhs’ qualities of head and heart into warfare against the Mughals, providing exemplary leadership and attaining a string of victories. Those who succeeded him chose the pragmatic route of guerrilla warfare, avoiding pitched battles. They preferred to hit at the Mughals’ logistics, and spent their energies on controlling more and more territory. However, the warrior spirit sustained and continued to grow.

By this time, the Sikhs had mastered the art of war. They were able to strike at will, not only at the Mughal armies but also at new invaders from Central Asia. When the Mughals were weakened, the Sikhs, in their individual groupings, engaged in internecine warfare. Ranjit Singh, leader of the Sukerchakia Misl [one of the sovereign states of the Sikh confederacy], subdued, co-opted or allied with the others to emerge as the undisputed ruler of the Punjab, conquering Muslim and Hindu rulers alike. His strong army put an end to invasions from the traditional route, the Khyber Pass. In fact, it is a well-documented fact that the history of Sikh arms entered its second phase under Ranjit Singh. He exploited his military and political genius to carve out an empire for himself. Enlisting the services of European and American mercenaries to organise and train his army on modern, western lines, he soon posed a strong threat to the resurgent British.

Interestingly, the same spirit that guided Ranjit Singh to build his own empire and army in Lahore guided my ancestors down south, in Patiala, to follow the warrior tradition of our gurus to protect the Sikh identity. That tradition has lived through the centuries to become an inalienable part of my family, and an ethos that other members of my family and I have continued to nurture in our own small ways.

For the Sikh community all those eons ago, it was a short journey from defending themselves to defending others. Actually, it was kind of a natural corollary, given the strong historical warrior roots of the community. The culmination of this journey was the formation of the Indian Army’s Sikh regiment soon after the Treaty of the Sutlej in 1846. As a result of the treaty, 10,000 Malwai soldiers were repatriated back to their villages in Malwa. But they were by now restless souls, whose fighting spirit refused to surrender to the new, changed environment. And so the British authorities decided to raise their own regiments of the Sikhs.

That was, in fact, when my Sikh regiment also came into being, with its first Ferozepur battalion and the second Ludhiana battalion—all coming from Ranjit Singh’s army. But the Sikh soldiers were not confined to the Sikh regiment—soon you could find them in the Guides Cavalry and the Governor General’s Bodyguard. Not many would know, but there were Sikhs fighting for the British also in the Battle of Gujarat! By 1901, five battalions had been raised in the Sikh regiment. Many Sikhs went into the cavalry, artillery and other arms. You could even find Sikhs fighting in the war against the Afghans in 1897-98—the first Sikhs went for the defence of Chitral, the second to the Malakand field force (a battle in which Winston Churchill also fought), the third to Chakdhara and fourth to the historic Saragarhi, not to mention a host of other smaller, lesser-known battles, which only served to further power the Sikh ‘warrior’ spirit. 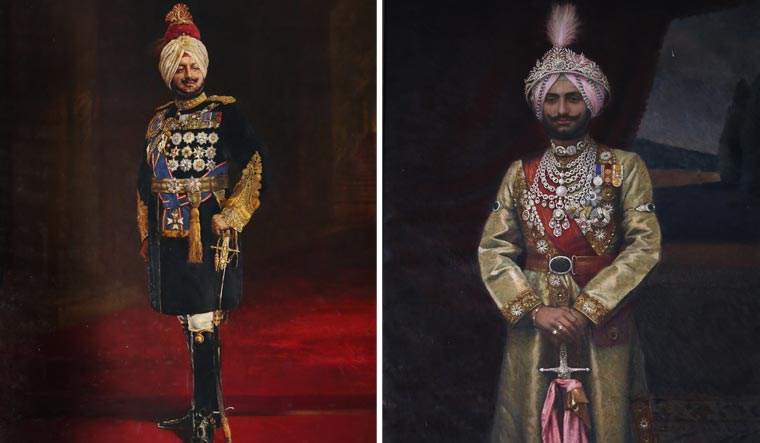 The World Wars saw the Sikhs committed to fighting in even larger numbers, and they fought exceedingly well, with the Gallipoli battle seeing the first Sikhs lose more men than their entire strength in the first war. But their overall strength in the battlefield never diminished, as more and more reinforcements kept coming, including from what are today’s 15 and 16 Battalions of the Punjab Regiments, which were raised by the Patiala State. This spirit manifested again in WWII and the war of India’s independence.

The Sikh soldiers continued to do a great job even after Independence, with the 1962, the 1965 and the 1971 wars and Kargil being the notable examples. And needless to say, they have been much feted and honoured for their valour and sacrifices. This is an unequivocal fact of Sikh military history, which remains etched in the annals of global and Indian conflicts. And, it is an honour that I am gratified to share with my ancestors and the Sikh community at large.

However, even as we, as Sikhs, continue to revel in the pride bestowed on us by our history, let us not forget to acknowledge that there exist in the Indian Army many other regiments and soldiers from other sections of the society who have excelled as much in all these wars and battles over the years. While historically the various regiments might have been created, and continue to be identified, with the castes and communities to which they belong, the Indian Army always has been, and will remain, a cohesive unit. It is a matter of recorded history that if Sikhs crossed the borders to fight on foreign lands, so did the Gurkhas. Soldiers of every regiment, cavalry, artillery or infantry, be it the Dogras, the Jats, the Rajputs, the Marathas, have, at one level, excelled for the Indian Army, and at another, for their respective communities. Who can ignore the fact that two soldiers of the battalions of the Garhwali regiment won a Victoria Cross each in World War 1!

The Indian Army cannot, and should not, be pinned down to a single community, as its great tradition encompasses the Army as a whole. Today, it stands tall as the Army of the country, of which the Sikhs are just a part, albeit a very important one. Actually, even in the erstwhile Indian Army of the pre-independence era, while every regiment had its own ethos, it also followed an underlying ethos that belonged to the entire Army as a whole. It is this tradition that I, as a Sikh soldier, am proud to follow and revere. The warrior is there in each of us, and the Sikh warrior is now part of the bigger whole, bringing to the Indian Army his own set of courage, values, ideals and principles that are enshrined in his psyche. It is this Sikh warrior I am proud to be, and even more proud to salute!

The writer is chief minister of Punjab.