Dialogue not possible on the blood of Kashmiris 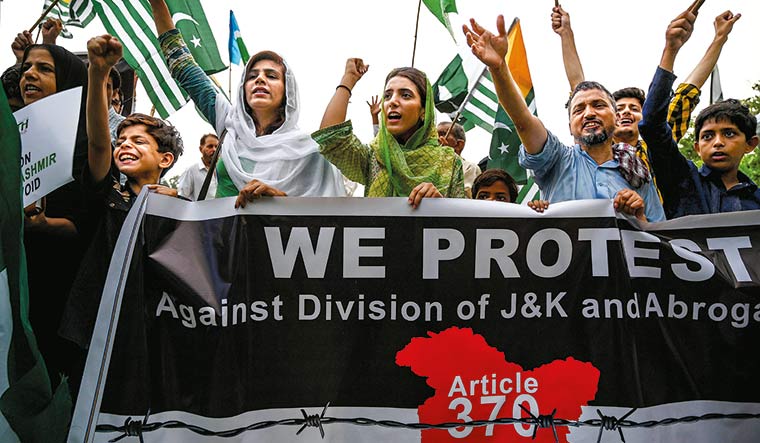 Angry response: Protests in Islamabad against revoking the special status of J&K | AFP 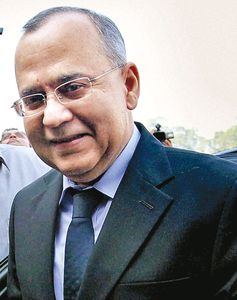 IN MY PERSONAL ESTIMATION, there are two paths that could be followed to realise our respective visions for our future and for the future of this region. One path is of cooperation by which we can ensure a more prosperous future in terms of peace, prosperity and development where common problems like disputed places are addressed. The other is the existing path, which is just playing politics of argumentation and disputation. In this process, a large part of the region has been left behind in time and in the march of history.

We have had a new government in Pakistan last year. Even before the prime minister took office, he made some very important remarks on how he wanted to see relations [with India] develop through normalisation, cooperation and trade. “One step for India and two steps for Pakistan,” he had said in his acceptance speech. Pakistan has moved in the past few months in this direction.

We have had a terrible situation on our western borders for 40 years, which is coming to some kind of resolution. But, along with that, we want to see an improvement in our relations with India. That is the background in which I see this development over Kashmir.

This step that the Indian government has taken to revoke Article 370, from Islamabad’s perspective, comes at a wrong time. First, the optics of it. There were, as we saw reports, a large number of troops and paramilitary forces. Then, there was a clampdown on communications, removal of non-residents and foreigners and the media blackout—all of these smacked of some sort of cover for what happened [the scrapping of 370].

That it happened was no surprise because it was part of the BJP’s election manifesto. The BJP has the requisite majority, and it can do what it wants. But the manner in which it is being done, does not bode so well, not only for Kashmir, but also for the long-term prospects of India-Kashmir relations. The leaders of the mainstream parties like the PDP and the National Conference are under house arrest. If I were in Delhi and saw it from the Indian perspective, I would have realised that I was probably losing a lot of friends in Jammu and Kashmir. Which means, [it is going to result in] simply one hundred per cent alienation [of the people of Kashmir] from the government of India. I do not think it augurs well for India.

As far as the implications are concerned, Pakistan has never recognised the accession of Jammu and Kashmir to India. Legally, this was a fiction which was perpetuated. If India has now removed this restriction, the so-called fig leaf which gave India the claim of accession and some kind of presence, we are back to 1947 on Jammu and Kashmir. The double jeopardy is that the action to bifurcate the state, in a sense, demolishes its political identity. To the Kashmiri, Article 35A is his identity. [Its removal] will be resisted by the Kashmiris and to perpetuate the situation, India will have to depend on its might, the use of force. That makes it more stark. I do not think this is good for anyone. It is not for me to do a rethink for Delhi about the consequences of this development.

Pakistan and the Kashmiris firmly believe that this is an international issue, and a subject for conflict resolution. Therefore, it is already internationalised in the legal sense. India is helping us internationalise it even more with human rights violations, and by unilaterally trying to alter the status of the territory. It is a step that amounts to annexation.

It has been a part of the official Indian narrative that a propitious environment must be created for a dialogue. We can say equally strongly and with much validity that India needs to create a propitious environment for dialogue. I do not think a dialogue with Pakistan is possible on the blood and misery of the Kashmiri people. This constitutes a serious setback for the prospects of a bilateral dialogue. It was for both India and Pakistan to have thought out of the box and created some comfort for the Kashmiri people. If they are trying to create more discomfort, then no one can ignore the facts on the ground.

As to the question of linking this to the developments in Afghanistan, well, I think the two are separate. Pakistan’s and India’s troubles should not be superimposed on Afghanistan. It would be a mistake to see it that way. I think there was a degree of convergence in our interests in Afghanistan. We would like to see Afghanistan at peace. Afghanistan was made a member of SAARC. That again was part of the vision for a more prosperous south Asia. That vision is fractured. Unless we have some compatibility of the vision that we have for the region, we are all lost.

Bashir was foreign secretary of Pakistan and high commissioner to India.