Sadashiv Sathe has been making Gandhi statues since 1952 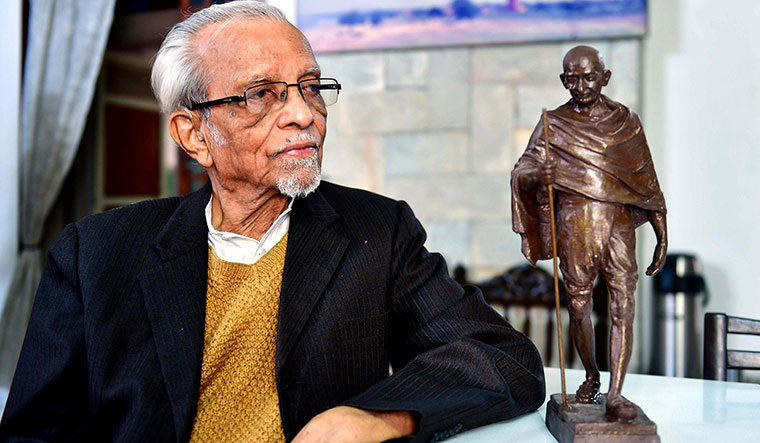 Sadashiv Sathe made the first statue of Gandhi opposite the old town hall in Delhi in 1952. Now in his early nineties, the renowned Mumbai-based sculptor has made his latest statue of Gandhi at the National Salt Satyagraha Memorial in Dandi, Gujarat. The NSSM is a tribute to the 80 marchers who joined Gandhi during the salt march, from Sabarmati to Dandi, in 1930.

Designed by IIT, Mumbai, and commissioned by the Union ministry of culture, the memorial—one of its kind—is an experiential journey recreating the spirit and energy of the Dandi march.

“I was only 28 when I made Gandhi’s first statue,” Sathe told THE WEEK. “When I was approached to make the statue [at the NSSM], I decided that it should be something that nobody has made earlier. We should not try to copy ourselves.”

Gandhi was thinly built, said Sathe, “But he had the strength that shook the British”.

Sathe’s son Srirang, who assisted him in making the 15-feet tall bronze statue weighing three tonnes, said it reflected Gandhi’s mood during the Dandi march. Said Srirang, “It shows the firm stance of Gandhi. In fact, when the statue was made, there were a few who even said that Gandhi looked arrogant in it.”

Sixty pieces were cast differently at Sathe’s foundry in Oshiwara, Mumbai, and dispatched to Dandi as one whole piece on a trailer in 2014. It took over two years to make the statue.

What began with a sketch was followed by a clay model of around two-feet height and fibre body. After which came the enlargement engineering, with Sathe giving perspectives on how the statue should look when a person saw it. Srirang, who was part of the team right from the conception stage, also helped in welding the parts.

According to Srirang, the uniqueness of the statue is that the emphasis is on Gandhi’s spirit and not the physical resemblance. Physical resemblance, according to the Sathes, is a craft and artists should not concentrate only on it. The statue was made after watching various photographs and video clips of Gandhi during the salt satyagraha.

Sathe’s nephew Siddharth was involved in making the life-size statue of Gandhi at the Dandi memorial, which is probably the only statue of the Father of the Nation that has its head covered with a napkin. “I wanted the statue to be different. In photographs and video clips I have seen him covering his head for protection from sunlight,” said Siddharth.