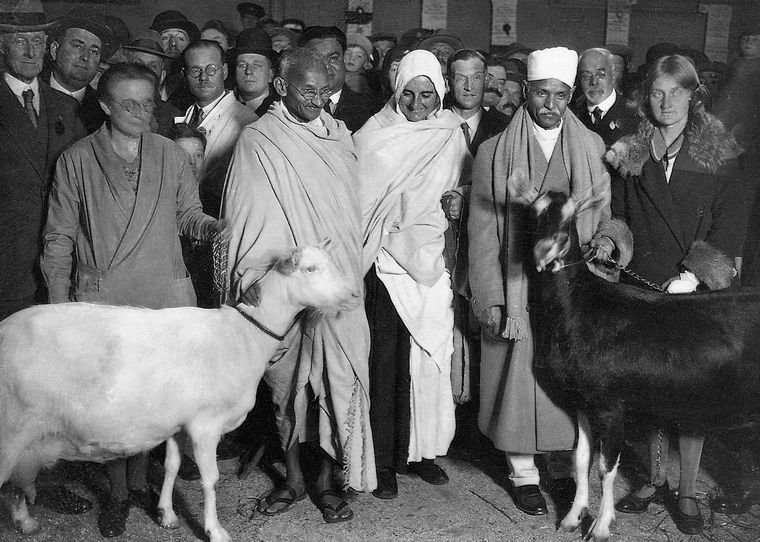 October 1906 saw an interesting encounter between two individuals, who were to be political rivals for decades thereafter and whose ideologies were to divide the Indian polity irrevocably. This was when M.K. Gandhi came calling to London’s India House and met Vinayak Damodar Savarkar. Sponsored by a proponent of Indian freedom, Shyamji Krishna Varma, the India House was ostensibly fashioned as a hostel for Indian students studying in London. But under Savarkar’s leadership, it had transformed into a veritable hotbed of “sedition and dangerous revolutionary activities” spanning across Europe.

Savarkar was busy cooking when Gandhi tried to engage with him in a political discussion. Cutting him short, Savarkar asked him to first have a meal with them. Gandhi was horrified to see the Chitpavan Brahmin, Savarkar, cooking prawns. Being a staunch vegetarian, Gandhi refused to partake. Savarkar apparently mocked him: “If you cannot eat with us, how on earth are you going to work with us? Moreover, this is just boiled fish; while we want people who are ready to eat the British alive!” This was obviously not a great first meeting and their differences only increased with time.

The contrasts and similarities between the two men are fascinatingly striking. Both spent significant times outside mainland India—Gandhi in South Africa, Savarkar in London first and then over a decade in the dreaded Cellular Jail of the Andamans. They were both interestingly self-conscious Hindus, though their approach differed. Both advocated Hindi as a lingua franca of a linguistically divided India. Both wrote books in the same year, 1909, that were banned by the British—Gandhi’s Hind Swaraj and Savarkar’s First War of Indian Independence on the 1857 uprising. They were not only political rivals, but intellectual opponents, too.

There is an allusion that Gandhi had Savarkar in mind while writing Hind Swaraj, while Savarkar’s 1923 treatise Essentials of Hindutva was undoubtedly his first major salvo against Gandhi whose pacifist philosophy he was totally opposed to. Though swaraj was the goal of both their works of 1909, for Gandhi, the means was intrinsically linked with the ends and nonviolence was the guiding mantra. Savarkar, however, believed in self-assertion of the nation, which many a time could have no other outlet than a violent, armed one. He derided the pusillanimity of ahimsa and all his life believed that militarisation was a prerequisite for a strong country. 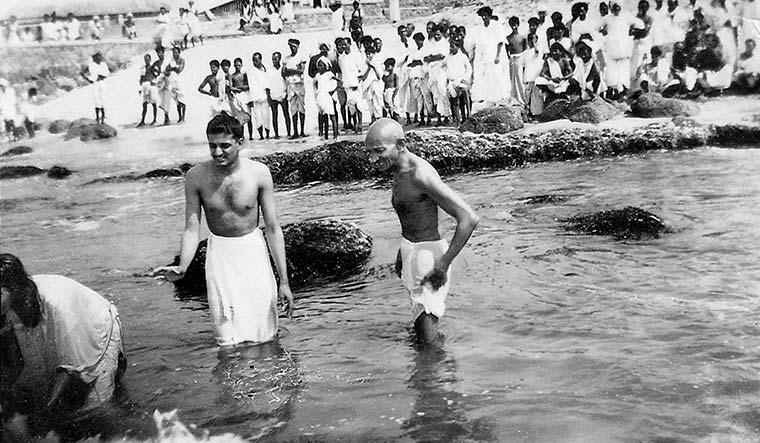 As the first leader to vociferously demand nothing short of complete freedom at a time the Congress was still petitioning the British for concessions, Savarkar articulated his vision of a grand constitutional republic for India, way back in 1908. It was to be a bicameral parliament akin to Britain’s with native princes who helped the freedom struggle as members of the upper house and directly elected representatives in the lower house.

For spearheading violence, political assassinations and smuggling arms and bombs into India, Savarkar was held in London in 1910, charged with sedition, extradited, unfairly tried and condemned to the dark dungeons of Kala Pani for two life terms equaling 50 long years. Gandhi was nowhere on the national scene when Savarkar was deported to the Andamans. But by the time he was repatriated to an Indian jail in 1921, Savarkar had to contend with a Gandhi who had not only returned to India but also managed to take complete control of the Congress and the nationalist struggle, especially after the death of Bal Gangadhar Tilak in 1920.

Savarkar watched with horror, from the confines of his prison, the dangerous communal fire that Gandhi was stoking by linking religion with politics through his Khilafat agitation and yoking it to Indian freedom. Towards the end of World War I, many Indian Muslims, particularly the Sunnis, demanded the maintenance of the defeated Turkey sultan’s sovereignty, since they saw him as a symbol of their holy Prophet. The British were least obliged to meet such demands from subjects of a colony and more so when the rest of the Muslim world, including Turkey itself was happy to dispense with the monarch.

Evidently, the movement was bound to fail. Yet, Gandhi assumed the leadership of the movement, with “such tenacity and faith”, as B.R. Ambedkar put it, “which must have surprised many Muhammadans themselves.” While Gandhi, who was a master of symbolic politics, had hoped that this would herald Hindu-Muslim unity and also help recruit Muslims into the nationalistic struggle that they had consciously kept away from, his promises of delivery within a year heightened the hopes of communally surcharged mobs. 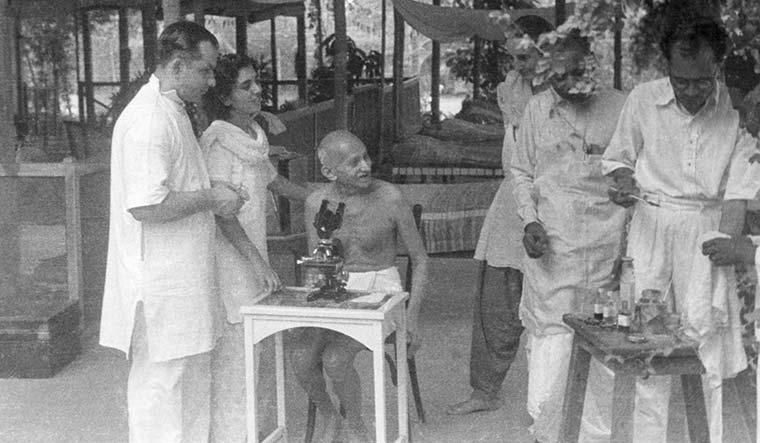 Curious mind: Gandhi observing a hookworm cell through a microscope at Sumati Morarjee’s residence at Juhu Beach, Bombay, in 1944.

With the inevitable failure of Khilafat, the anger of the mobs resulted in huge communal clashes across India all through the 1920s—the Moplah massacre in Malabar, Gulbarga, Kohat, Delhi, Panipat, Calcutta, East Bengal and Sindh to name a few. Each time, Gandhi’s lukewarm response angered Savarkar. For instance, Gandhi described the blood curdling genocide of Nairs in Malabar as the act of “brave, God-fearing Moplahs” and called them as patriots “fighting for what they consider as religion.”

It is in this backdrop that from the Ratnagiri prison Savarkar wrote his treatise on hindutva in 1923, as a direct response to Gandhism and Khilafat that he often called an ‘aafat’ or a catastrophe. He called for unifying Hindu society and challenged the transnational loyalties of Khilafat by his definition of India’s sacred geography and territorial integrity. Anyone who considered this land as the land of his ancestors and their holy land (including Muslims and Christians) was a ‘Hindu’—not by its religious term, but as a cultural marker of shared common history and bloodline. From then on, Savarkar fashioned himself as the champion for the cause of the Hindu community, though he did not care much for the ritualistic aspects of the religion itself, oscillating as he did between agnosticism and atheism.

From 1924 to 1937, Savarkar engaged himself in massive social reforms in Ratnagiri, where he was kept in conditional confinement after being released from prison. He strove hard for unity in the Hindu society advocating a complete eradication of the caste system, varna tradition and untouchability, and championed inter-caste dining, inter-caste and inter-regional marriages, widow remarriage, female education and temple entry for all castes.

His views were more in sync with those of Ambedkar than with Gandhi’s whose views on caste were peculiar. Hence, Gandhi’s views that he did not “believe the caste system… to be a odious and vicious dogma” and that “it has its limitations and its defects, but there is nothing sinful about it, as there is about untouchability” riled both Savarkar and Ambedkar equally. 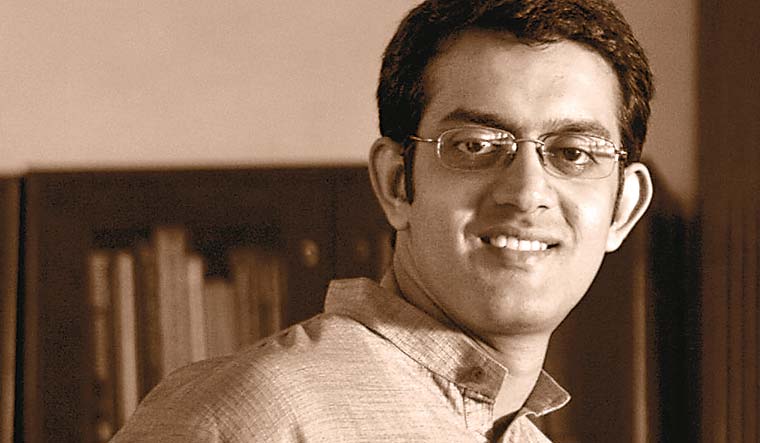 Vikram Sampath- Author, historian and a senior fellow at the Nehru Memorial Museum and Library. His upcoming book is the biography Savarkar: Echoes from a Forgotten Past.

When a deputation of untouchables came to meet him on December 15, 1932, Gandhi candidly said: “I do believe in the four varnas… all occupations should be hereditary. Millions of people are not going to become prime ministers and viceroys.” This to Ambedkar or Savarkar was antithetical to the fundamental concept of democracy where anyone, irrespective of their dynastic heritage, could actually aspire to become a prime minister or a viceroy!

Gandhi came to visit Savarkar at his house in Ratnagiri in March 1927. The two debated and differed for hours, especially on the shuddhi or reconversion to Hinduism that Savarkar was undertaking. While taking leave, Gandhi told Savarkar that noticeably they disagreed on several issues but hoped that the latter would have no objection to his experiments to deal with the issues on hand. Savarkar gave a stern reply: “Mahatmaji, you will be making these experiments at the cost of the nation.” The two never met thereafter.

Following his release in 1937, Savarkar became president of the Hindu Mahasabha, pitting himself directly against Gandhi’s Congress and Jinnah’s Muslim League. He opposed what he considered foolhardy jail-filling agitations like the Quit India, and instead actively supported and helped Rash Behari Bose and Subhas Chandra Bose and their Indian National Army in recruiting troops for the army. That it was the Naval Mutiny of 1946 in Bombay that eventually got us freedom is something our history books have cleverly concealed.

Savarkar was a die-hard rationalist and advocated mechanisation, market-driven economy, strong military and scientific temper. He pooh-poohed Gandhi’s attribution of the devastating 1934 Bihar earthquake as God’s punishment for the caste system. “I still await to hear,” he mocked, “what his inner voice will tell us about why Quetta was rocked by an earthquake!”

When Gandhi spoke contemptuously about the influence of cinema, Savarkar stepped up to back it as the best example of modern technology and that he disliked “any restrictions on the innovative spirit of the human mind.” When the interviewer asked him if these were contrary to what Gandhi thought, he made it a point to quip: “Is there anything common between Gandhi and me?”

Gandhi was a great advocate of cow worship and said in June 1921 that “no one who does not believe in cow protection can possibly be a Hindu. Cow worship means to me the worship of innocence.” Savarkar’s views would shock the cow-vigilante mobs today as he viewed cow only as a “useful animal”. Savarkar argued that cow deserves to be protected, but elevating it to the status of worship was an insult to both humanity and divinity. “The qualities of the object of veneration permeate to the worshipper,” he believed, and hence the symbol of hindutva was not to be the docile cow but the ferocious man-lion Narasimha.

All his life Savarkar romanticised the idea of dying a martyr. But even in death Gandhi stole a march—being assassinated by a former acolyte of Savarkar in 1948. Savarkar faced trial on account of his implication by association, but was later acquitted for want of substantial evidence.

In a cruel irony, when the head of the Arya Samaj and a revered associate of both Gandhi and Savarkar—Swami Shraddhanand— was murdered by a Muslim bigot, Abdul Rashid, in 1926, Gandhi refused to condemn Rashid and called him his “dear brother”. Savarkar had then severely condemned and even mocked him in his writings: “It is the hallmark of a saintly Mahatma to say the blood that shed the ‘Hindu blood,’ that too of a saint, is that of my own sibling…. You never defended Dyer. Is not a European a brother, too?”

But Gandhi’s “nonviolent” adherents, however, had no such qualms. Since Nathuram Godse was a Maharashtrian Brahmin, what followed was a large-scale massacre of Brahmins across Maharashtra—again a fact well concealed since independence. Savarkar’s own younger brother Narayanrao was grievously injured in these riots and eventually succumbed. Savarkar was discredited forever and despite the acquittal, the taint stayed on. The two decades following Gandhi’s assassination were spent by Savarkar in near isolation before he ended his own life by refusing food, water and medication in 1966.

In terms of contrasts, while Savarkar stood for modernity and science, separation of ritualistic religion from politics, militarisation and dismantling the caste system, Gandhi spoke in terms of faith and religion, ahimsa, approved of the caste system in principle and had no time or appetite for science.

With economic liberalisation, the Pokhran nuclear tests, our space conquests and rapid urbanisation instead of gram swaraj—not to speak, of course, of the ascendant political right in India today that claims its ideological lineage from him—it is Savarkar’s vision of India that is fructifying and not Gandhi’s. Yet, one is the Father of the Nation and the other is always insinuated as his murderer by implication. Like the diagonally opposite directions that their portraits are placed in Parliament, Gandhi and Savarkar will continue to remain the two irreconcilable poles of Indian history.