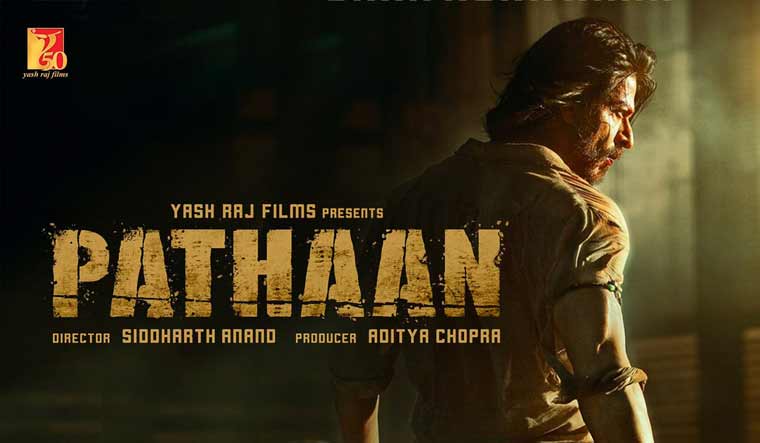 Who thought that the king of romance, who taught the Hindi moviegoers how to love, could also sweep us off our feet as an action hero? With his flowing tresses, signature impish smile, an eight-pack chiselled body and twinkling eyes that talk straight from the screen, Shah Rukh Khan is thunderous in this action-packed film.

Long back, Khan had admitted in an interview that he came into the industry wishing to be an action hero, "but romance happened." Pathaan, it seems, is his dream project come true and YRF pulled all stops to give the Baadshah a free reign to launch himself as the face of their Spy Universe.

Pathaan is a dishoom-dishoom joy ride between Khan and his perfectly beefed up antagonist John Abraham, that takes place in exotic locales from Spain to Russia to France to Dubai, on land, atop cars and bullet trains, in the skies and on the ice, basically everywhere and anywhere. There is no point looking for an eye-opening storyline or the most unusual narrative because the intention is not to let the narrative drive the story forward, but to let the larger-than-life magic of its lead superstars cast its spell.

The story begins with the revocation of J&K's special status by the Indian government on August 5, 2019. A general somewhere in Pakistan wants to avenge this, and hires Jim (John Abraham), a former RAW agent gone rogue, to execute a dastardly attack on India that will result in devastation. And so, the plan is to get on board Shah Rukh Khan's eternally patriotic and nationalistic jawaan, as he is the only one who can stop Jim.

Jim is on a mission to unleash a deadly virus in New Delhi and Pathaan is tasked with stopping him. Aiding him is Deepika Padukone as Rubiya, an ex-ISI agent.

Sadly, in the 146 minutes that the movie runs for, one cannot help but notice how abruptly scenes and sequences are cut short to move on to the next, leaving quite a few loose ends. Yet, one of the many heartwarming aspects in the film is that the villain isn't painted as a bad Muslim. In fact, he has his own shades of grey that make us want to root for him. Deepika it seems was mainly required to execute the image of a smart, sexy and seductive agent, and she aces the game there. Dialogues aren't punchy or impactful, and Khan's sardonic humour takes the cake.

Pathaan has reignited the desire to watch more of Shah Rukh Khan on the big screen, especially at a time when the echo of his "need for retirement" from Bollywood have created a din. "Yea, I think we should retire. But then who will replace us? Is there anyone out there? Sadly, no. So yes, we will continue," says Khan on the screen as if in an epilogue, alongside Salman Khan who plays a cameo in Pathaan. So yes, Shah Rukh Khan isn't going anywhere. In fact, this is only the beginning, and a rather electrifying one at that, of Bollywood's own spy universe.