'Kuttey' review: This dog-eats-dog slugfest is boring and listless

Tabu's character is the only one that makes an impact 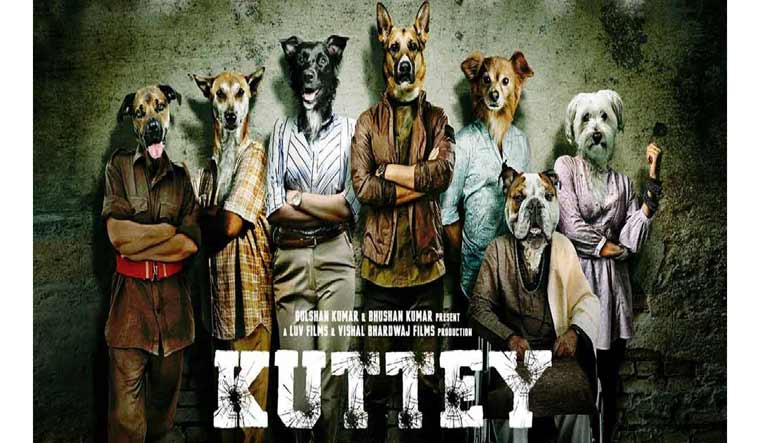 This very first and much-anticipated Bollywood film of the new year sadly feels more like a video game in which both cops and goons are chasing big bags of cash and small packets of powder and everyone's on a shooting spree. Arjun Kapoor emerges as the last man standing to walk away with the booty, only to later lose it all away to demonetisation. In Kuttey, all one hears are expletives and all one sees is blood, gore and dance bars. Dialogues are bland, lacking both emotions and depth. The last time we saw a similar concoction of this kind on celluloid - a loud and hectic drama with crooks chasing a booty - was in 2009 with Kaminey, directed by Vishal Bharadwaj.

With Kuttey, the father handed over the reign to his son, Aasmaan, and made his launch much easier by giving him the same set trope to play with. Sadly, the result was a dull, boring, languorous stretch of a film that seems to have been haphazardly put together, without any consideration for an engaging screenplay or a gripping storyline. Not even an ensemble with Naseeruddin Shah, Tabu, Konkona Sen Sharma, Kumud Mishra, Arjun Kapoor, Radhika Madan, Shardul Bhardwaj, could save the film in the face of a listless script.

So, in gangs of Kuttey (Dogs), we have Konkona who is a Naxalite leading an army, Kumud and Arjun, both unscrupulous cops, Radhika as a rich brat who wishes to elope with her lover and Shardul as someone who chases crores in the hope of starting a new life with his girlfriend and Naseeruddin as a lead gangster who's bounded to the wheelchair. Among all these, the only character who stays with the audience even after the film is over is that of Tabu, who excels in the role of a no-nonsense lady cop; her electrifying screen presence outwitting and outsmarting everyone else's lackadaisical performance. Naseeruddin Shah hardly has any role to play, nor does Konkona.

Arjun is seen moving around like a headless chicken, exactly the way his career is moving in real life. Kuttey was to be a crucial film that could salvage his fledgling career, which began with a smashing hit Ishaqzaade in 2012 but went downhill with each film after that. The plot is interestingly divided into four parts, an epilogue followed by three chapters – Sabka Maalik Ek, Aata Kya Canada and Moong Ki Daal. The film opens with Arjun and Kumud getting a contract to kill a politician's rival, but the plan goes kaput. Suddenly, their job is at stake and to rescue themselves out of the mess they need money. That money will come from a heist - looting a van full of cash meant to be loaded in ATM machines across the city - and what follows is a chaotic mess.

Kuttey makes one believe that perhaps Aasmaan failed to incorporate his father's inputs in the film, because had the latter directed this one, there's no doubt that the output would have been far different than what it is right now. Unfortunately, Kuttey fails to carry Vishal Bharadwaj's legacy forward. And even if one were to judge Aasmaan's work independent of his father's influence, Kuttey comes across as a big disappointment. A film one might watch to see where it goes, but definitely not a second time.