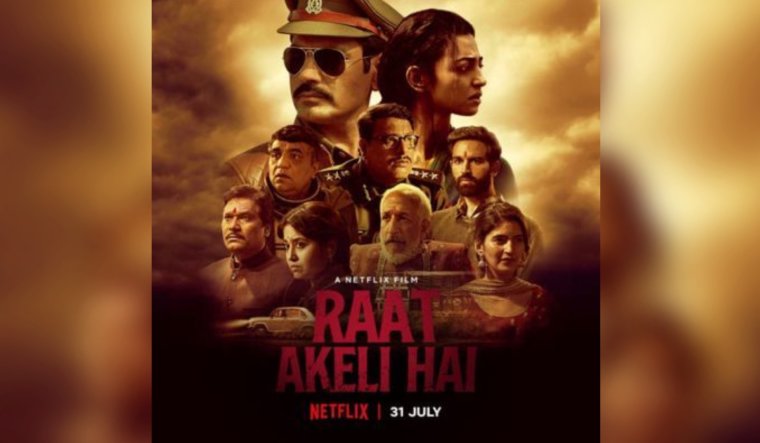 The directorial debut of casting director Honey Trehan with the story, screenplay and dialogues by Smita Singh (Sacred Games), Raat Akeli Hai, is a trite whodunnit set in a small town.

The patriarch of a high-profile family in the politically dynamic city of Lucknow has been brutally murdered on his wedding night. The much older victim, Thakur Raghuveer Singh, had married young Radha (Radhika Apte) who had been living in his house after his wife’s death. Her life as a concubine hasn’t been easy. But with the Singh’s death, Radha is as much in the purview of Inspector Jatil Yadav (Nawazuddin Siddiqui) as anyone else in the household because of the inheritance.

But as the story unfolds, Raat Akeli Hai becomes much more than just a criminal investigation. It dissects into the system, the police and political honchos being hand-in-glove, the patriarchy, and outstandingly makes a statement on our obsession with looks. To be precise, with fair skin.

Siddiqui’s complex and yet righteous Jatil Yadav, who finds himself in the thick of things, is well past his prime—he is still single and a social misfit in a police chowki full of married men, and can be awkward around women. Jatil has his own ideas about women—they must be susheel, sanskari and wear clothes that’s not revealing; his mother, at the same time, seems more progressive than him.

Trehan, Vishal Bhardwaj’s constant collaborator, started his own production house, MacGuffin Picture, along with Abhishek Chaubey, with the much celebrated and acclaimed A Death In The Gunj (directed by Konkona Sen Sharma). The production house followed with Chaubey’s Sonchiriya and now with the Netflix original, Raat Akeli Hai. The last time Trehan tried to direct his debut film, he had found himself attracted to Sapna Didi, a chapter from Husain Zaidi’s book, The Mafia Queens of Mumbai. A film Trehan thought would be better directed by Bhardwaj as he had written the script anyway. But his fascination with stories that have deep crime angles is evidently visible.

Speaking to THE WEEK on a video call, Trehan admits he is a huge Alfred Hitchcock fan, and the thrilling aspects of stories fascinate him. That’s the reason his company is also called MacGuffin (an object or device in a movie that is important to the character or plot and sets a chain of events into motion) Pictures—a term that has its origin in theories of Angus MacPhail, but was popularised by Hitchcock. “I am, of course, fascinated by these stories.”

But he says that it is the finer elements covered in stories that attract him even more; the genre may just be a path to telling stories that have more meaning. In the case of Raat Akeli Hai that took more than two-and-a-half years in development, it was the inherent questioning of patriarchy that was very fascinating to him.

“It’s my motive to attack the patriarchy, which is a curse in our society,” he says as he talks about his prime character, Jatil Yadav. “He is a victim of society. That is why he is carrying that kind of a patriarchal mindset. That is the reason he wants to marry a certain kind of girl. That is also the reason behind his complex because of his dark skin. Through the journey of this case, however, he is digging deeper and understanding the reasons behind what he stands for. He goes through an internal journey.”

The film starts analysing these themes early on. Jatil has a clandestine space for his fairness cream, which he applies without fail before stepping out for work. Trehan recalls Siddiqui’s personal story, his own complexes with his dark skin, which was similar to the ones explored with his character. As a teenager, the actor had been referred to as “Kaalu” by family members and friends while growing up. Before meeting a girl on whom he had a crush, Siddiqui, who had insecurities about his dark skin, went out and bought a knockoff version of a popular fairness cream for Rs 2.5. When he applied “Fairly & Lowly” on his face, it left white patches all over. “Cream laga kar aaye ho? (Have you come to meet after applying cream),” the girl asked Siddiqui, before dumping him.

“It was so exciting how a script chooses the actor or vice versa,” says Trehan laughing at his own narration of Siddiqui’s story. “The actor-character meeting is visible in the final product.”

These are some of the things that have kept Trehan intrinsically attracted to the art of filmmaking. He hadn’t come to Mumbai in the early 2000s to become a casting director. In fact, he was directing plays in Delhi under the tutelage of Barry John. He was just 19 when he was revered as the youngest theatre director by the media. It was for directing Munshi Premchand’s Kafan. His parents, who lived in Allahabad, weren’t too sure of their son’s artistic choices till then. “The bargain was on,” recalls Trehan. But the success of Kafan, his interest in the rooted reality of India instead of a Western drama, piqued the interest of the national broadcaster Doordarshan at the time, and Trehan was called for an interview on TV. It sealed the deal for his parents and gave them the confidence to let him explore the arts.

The journey to Mumbai would be for directing a play written by Sarveshwar Dayal Saxena. Actor Piyush Mishra introduced him to Bharadwaj, who was in the process of making his first film Barf, which never got made. But the association continued and Trehan started working as an assistant director with Bharadwaj on Makdee . “Direction was the only thing I was pursuing. But keeping my theatre background in mind, he pushed the envelope for me and asked me to look into the casting by the time the script was being worked upon,” he reminisces.

There was no concept of casting directors till then. The same actors were repeated across movies for certain roles for villains and side heroes. But Trehan pushed the boundary. Over the years, he has been hailed as one of the best casting directors, bringing in a plethora of roles to people often unimagined for the part—whether it’s casting Saif Ali Khan in Omkara, or Amole Gupte in Kaminey, Trehan has won plaudits on the way.

Meanwhile, he has kept his passion for direction alive often associating in films, especially directed by Bhardwaj, as an associate director. Now, as he makes his directorial debut, he wants to continue the same path till he finds another story to direct. “I am interested in everything to do with filmmaking,” he says, barring acting that is. “You wouldn’t see me make a debut as an actor,” he laughs.