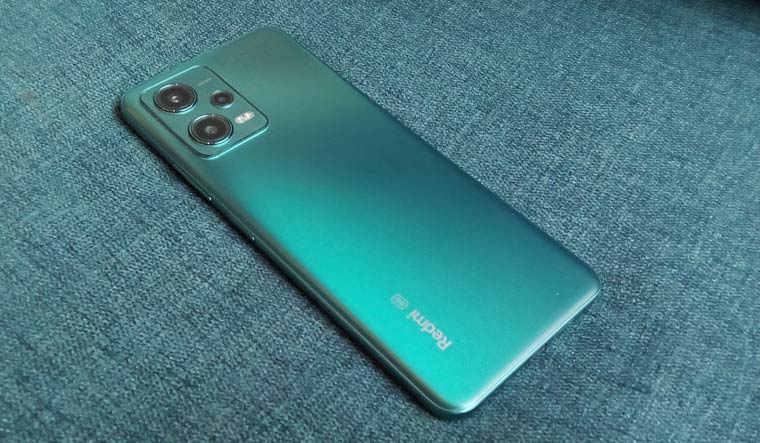 Xiaomi’s Redmi Note series has been one of its most popular line ups of smartphones since the company started operations in India. Whether it’s launching earlier 4G devices, taking lead in the mid-range or providing more than few phones across different price segments, the Redmi note series has been in the thick of things for Xiaomi, and the company expects something big with its new Redmi Note 12 series. This 5G series has Redmi Note 12 Pro+, Note 12 Pro and Note 12, which is the one I have been using for a few days. Let’s see if the most affordable 5G device from the series does any justice to the Redmi Note series or not. I tried the 6GB + 128GB model that’s priced at Rs. 19,999 (before discounts).

Design: The phone doesn’t have the most premium look and feel seen from a Xiaomi device, but it isn’t cutting too many corners either. It weighs a little under 190grams and is IP53 water and dust resistant, and doesn’t catch fingerprints and smudges that quickly as a lot of other phones these days, though every now and then you might still have to wipe it clean. It features a 6.67-inch AMOLED display with Corning Gorilla Glass 3 on top. I tried the phone in the Frosted Green colour and didn’t find it slippery at all. The back is all plastic but it doesn’t exactly feel cheap, but what’s might appear cheap is the back give-in near the middle part. Just a slight pressure with your finger and you can see the back panel getting pressed inside. Other than the Redmi branding on the back, you have the triple camera setup placed on a protruding rectangle near the top left. The left side only houses the dual SIM card + microSD card tray, while the right side has the volume buttons near the top and the Power/lock key near to the middle; these keys have decent feedback and don’t require too much pressure. On the top you have the 3.5mm audio jack, Infrared port and secondary mic, while the bottom has got the primary mic, USB type C in the middle and loudspeakers. The bezels around the display aren’t too broad, except for the bottom bar (chin), which is non-uniformly thicker by some extent. The ear-speaker grille next to the punch-hole selfie camera is hardly visible unless noticed from a short distance.

Display: The device sports a 6.67-inch 1080x2400) FHD+ AMOLED display that supports up to 120Hz refresh rates. I found the display to be sufficiently bright for outdoors use, the company claims 1200 nits of peak brightness. I preferred to keep it on slightly different colour scheme than the default one out of the box (between saturated and standard) and you might want to do try the same. The display has deep reds and decent greens and does a decent job of multimedia handling, including HDR content, for a phone priced at this point. It’s not the highest quality of display seen on a Redmi Note device but there’s not much against it either here for viewing images, reading texts or streaming videos.

Camera: The Redmi note 12 5G sports a triple camera system on the back—48MP (f/1..88) main camera, 12MP (f/2.2) ultra-wide camera, and a 2MP (f/2.4) macro camera, while on the other side you have a 13MP (f/2.45) front-facing camera. The main camera on the phone can take detailed and contrast-y shots in decent lighting. It’s not very slow to respond and, if held without motion, can provide vivid shots for your stationary subjects. But while on the movie, it can struggle a bit to capture similar details and keeping colours intact. This along with the ultra-wide camera make for a nice combination for most of your photography needs, but the macro camera doesn’t really result too much useful output frequently, it would seem. The front-facing camera can take punchy shots, though with a hint of touch-ups and extra beautification done, which I suggest to switch off for trying out your selfies more often than not. More often than, not, it handles your social media needs just fine.

Performance and software experience: the device runs on MIUI 13.0.4 based on Android 12 with the November security patch installed. Xiaomi promises two years updates and, importantly, 4 years of security updates for the device. It comes equipped with Snapdragon 4 Gen 1 chipset (octa core processor, Adreno 619 GPU and X51 5G modem) coupled with 6GB of RAM and 128GB of UFS2.2 storage. The overall performance is a bit of a mixed bag. I found the experience to be okay most of the time in terms of handling a few daily apps, navigating Homescreens, opening and closing Webpages, but every now and then the phone would stutter while scrolling within apps or even withing pre-loaded wallpapers while having several apps opened in the background earlier on. Worth noting that this stuttering became much less frequent with the last OS update, which is nice to see. It doesn’t overheat or doesn’t seriously struggle with basic tasks such as calling, Emailing, video calling, watching videos over YouTube or playing not-so-intensive games like Monument Valley but it clearly has its ceiling in place. MIUI is feature-loaded with some questionable choices such as still no copy to clipboard option in the sharing menu, though it’s not something you can’t address with third party options. One improvement with the latest MIUI is better iconography with respect to Material U for customizing your app icons and system wide accents. There are also a lot of different types of themes available in the themes store to try on. As you can see, It’s not a huge jump in terms of the chipset power and general day to day load-handling compared to the predecessor.

Battery life and other titbits: With a 5,000mAh battery unit, the phone lasted a day and then some more often than now. With brightness at 40%, two Email Accounts on sync, 2 hours or so of YouTube videos consumption and a lot of use of apps such as WhatsApp, Telegram and Chrome, the phone doesn’t disappoint in the battery department. You get a 33watt charger in the box (with a USB type C to a cable), which is the official charging capacity of the device, charging the phone from 1% to full in 65-70 minutes, which isn’t too long. The phone supports 5G for NSA and SA networks, and I found its 5G performance in line with how’s 5G coverage been so far on Jio (not available on Vi). On 5G, I saw close to 1.2GBPS when in low traffic areas, and the phone switched to 4G LTE when no 5G was available rather well instead of completely going off the network that can happen at times. Also, there’s no issue with WiFi connectivity or Bluetooth stability noticed on the device. The stereo speakers are loud and balanced for watching videos and playing games, occasionally having distortion at highest volume levels.

Verdict: All in all, the Redmi Note 12 5G has its fair share of strengths and weaknesses, being the most affordable device in the Note 12 series. It has a great battery experience, a good display, decent performance and a capable camera but the jump from the Redmi Note 11 isn’t quite significant here. The software could have been further refined in terms of pre-loaded apps and their notifications, but, as mentioned earlier, they aren’t too bad for day-to-day usage and for some casual gaming. If you want a budget Android device with great battery life and display and have used MIUI earlier, the Redmi Note 12 5G is a worthy consideration, but if you’re more into intensive gaming and prefer a standout design, you might want to look somewhere else, including Xiaomi’s own offerings priced just a little higher.