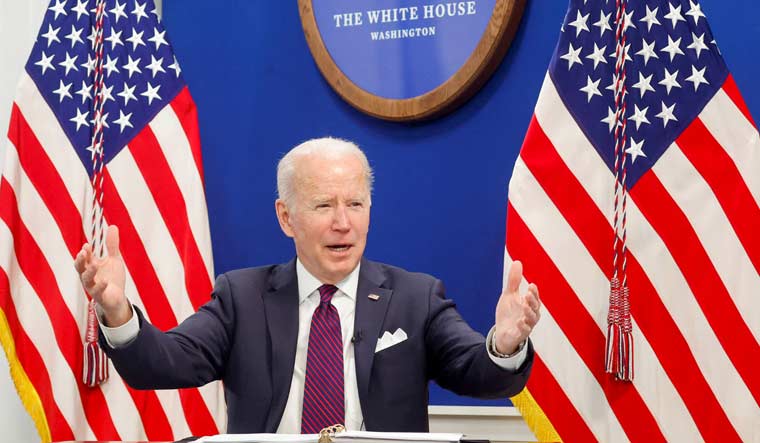 Biden's has also mooted moving New Hampshire and Nevada on top of the slot, followed by Georgia and Michigan. The President's suggestion, which is likely to get a favourable response from Democratic officials considering he is the head of the party, comes as Democrats aim to bring in more diversity -  demographic, geographic and economic - in the early nomination process.

"We must ensure that voters of colour have a voice in choosing our nominee much earlier in the process and throughout the entire early window," Biden wrote in a letter to members of the Rules and Bylaws Committee which met to discuss and vote on changes to the calendar.

"As I said in February 2020, you cannot be the Democratic nominee and win a general election unless you have overwhelming support from voters of colour — and that includes Black, Brown and Asian American & Pacific Islander voters," The Washington Post quoted the President's letter.

Biden added that Black voters for years have been the "backbone of the Democratic Party but have been pushed to the back of the early primary process." He added that it was time to stop taking these votes for granted and instead give them a louder and earlier voice.

He has also asked for a review of the calendar every four years to  "ensure that it continues to reflect the values and diversity of our party and country."

However, in 2020, Democrats experienced issues tabulating results in Iowa when a smartphone app meant to streamline the process for the Democrats' presidential contest failed and no winner was named. Following this, the call for Iowa caucuses to lose their first-in-the-nation status grew louder.

Republicans too hold their first presidential nominating contests in Iowa, which is likely to continue as such.

However, Biden's proposal has met with resistance with Democrats in New Hampshire already up in arms against Biden's wish. "The DNC did not give New Hampshire the first-in-the-nation primary and it is not theirs to take away. This news is obviously disappointing, but we will be holding our primary first. We have survived past attempts over the decades, and we will survive this," New Hampshire Democratic Party chairman Ray Buckley was quoted by The Washington Post.

Democrats in Iowa too have decided to protest against the move. According to Scott Brennan, Iowa’s representative on the Rules and Bylaws Committee, they are going to "stand up for  Iowa’s place in the process."

However, democrats in South Carolina and Michigan have welcomed the news. "This president knows that any road to the White House has to go through the heartland of America," Rep. Debbie Dingell (D-Mich.) told the news outlet.