Evacuations of civilians begin as Ukraine braces for harsh winter 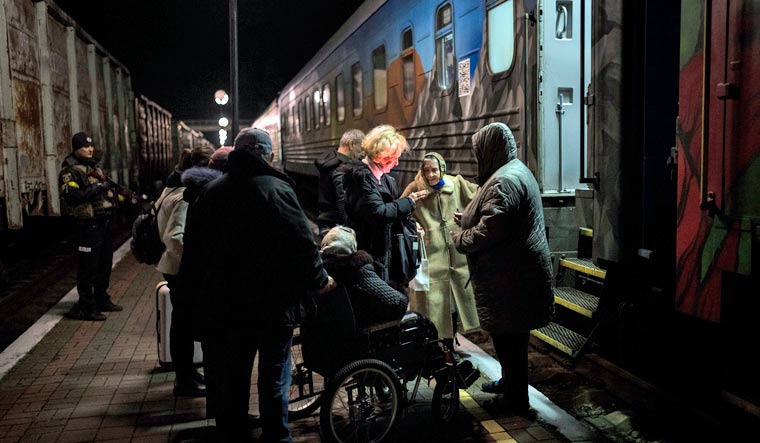 Ukrainian authorities have begun evacuating civilians from recently liberated sections of the Kherson and Mykolaiv regions, fearing that a lack of heat, power and water due to Russian shelling will make conditions too uninhabitable this winter.

Authorities urged residents of the two southern regions, which Russian forces have been shelling for months, to move to safer areas in the central and western parts of the country.

President Volodymyr Zelenskyy urged people to conserve power, particularly in hard-hit areas such as Kyiv, Vinnytsia in the southwest, Sumy in the north and Odesa on the Black Sea, Reuters reported. Ukrainians are bracing for a tough winter with little or no power in several areas. Temperatures have started dropping below freezing after Russian strikes crippled Ukrainiane's power grid and other infrastructure. This has caused blackouts leaving millions of Ukrainians without electricity, heat and water.

"The systematic damage to our energy system from strikes by the Russian terrorists is so considerable that all our people and businesses should be mindful and redistribute their consumption throughout the day," Zelenskyy said in his nightly video address. "Try to limit your personal consumption of electricity."

Deputy Prime Minister Iryna Vereshchuk, on Telegram, posted numerous ways citizens can express interest in being evacuated, especially, the elderly, women with children and those who are ill or disabled.

Vereshchuk added that the government will provide transportation, accommodations and medical care for them. This winter will be life-threatening for millions of people in Ukraine, said the WHO's regional director for Europe, Dr Hans Henri P. Kluge told AP.