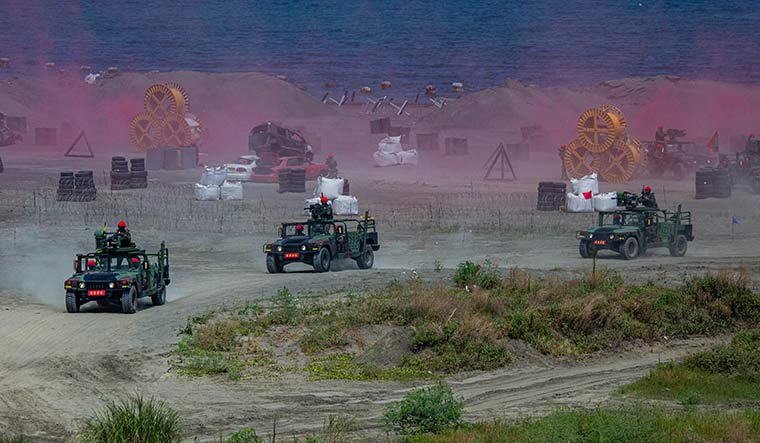 Indian legislators voiced support to Taiwan at the Inter-Parliamentary Alliance on China (IPAC) meet in Washington held from September 12 to 14. Sixty legislators from thirty countries came under one roof in Washington, vowing to sensitise democratic governments to the challenges posed by the rise of the People’s Republic of China under Xi Jinping.

While all eyes are on the Shanghai Cooperation Organisation (SCO) summit where the premiers of India, China and Russia are meeting in the Uzbek city of Samarkand, this meet in Washington already had the sparks flying with legislators from different countries calling for greater support for Taiwan and moving crucial supply chains away from China.

India has been an active participant at IPAC after it became a member last year. Sujeet Kumar, BJD MP who is part of the IPAC forum, apprised legislators about the aggression by China witnessed on Indian borders since 2020 Galwan Valley clashes and stressed on the need for democratic countries to join hands to resist coercion and intimidation by Beijing.

While India has been trying a balancing act, both on Russian war in Ukraine and Chinese aggression in Taiwan, the latter has clearly driven a sharper response from Indian participants at the IPAC meet with concerns being raised about not just Chinese aggression on the border but cultural genocide in Tibet and moves by Chinese Communist Party to interfere in Dalai Lama’s succession.

“Legislators from different countries should be cognisant of Chinese belligerence on Line of Actual Control, the game plan to appoint a successor to Dalai Lama and the continuing cultural genocide in Tibet. The aggression and bullying of Taiwan by China must stop,” Kumar told THE WEEK from Washington.

Kumar, who is also the convenor of the all party Indian Parliamentary forum for Tibet, said he will impress upon the Indian government to send a parliamentary delegation to Taiwan as part of its commitment to peace in the Indo-Pacific region. “We must stand in solidarity with Taiwan. Legislators from all over the world, including India, should visit Taiwan,” he said.

What is critical for India is its role in the global order vis-a-vis People's Republic of China (PRC) and the need to adopt proactive policies to build a resilient economy.

Meanwhile, the highlight of the IPAC meet was also the entry of Ukraine, which is the newest member of this block. IPAC was founded in June 2020 to reform the approach of democracies towards PRC. At the latest meet, the legislators also discussed the need to impose sanctions, establish export control and scrutiny mechanisms on PRC entities which are supporting Russia's military and defence industrial complex or participating in disinformation and propaganda strategies internationally. The IPAC has also called upon governments to stand with Ukrainian people and examine the role of PRC entities which are continuing to work with Russians while facing the ire of international sanctions regimes.

This has been IPAC’s largest conference till date and the document adopted at the end of the two-day meet addressed key issues under various heads like defending human rights and safeguarding international rules-based order, Hong Kong, Taiwan, strengthening democracy, and support for Ukraine. There is consensus on the need to strengthen enforcement mechanisms to detect and exclude products made with Uyghur forced labour from supply chains; scrutinising and limiting exports and technology transfer of specific sensitive equipment and technologies to the PRC and countering economic influence over countries like Sri Lanka and Malaysia where initiatives like the Belt and Road have been used to exert leverage. The IPAC said ''coercive diplomacy is unacceptable'' and urged member countries to reduce strategic dependency on China by building diverse and resilient supply chains.