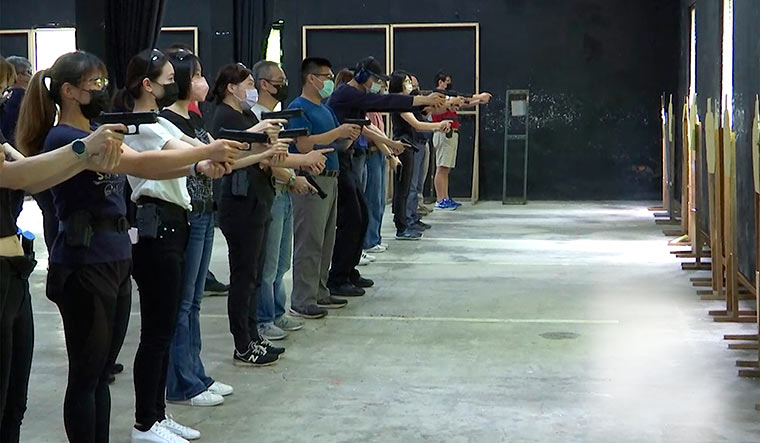 KINMEN, A GROUP of islands governed by Taiwan, and Xiamen, a port city in China, are barely 15km apart. These two critical frontiers are the first to feel the impact of cross-strait tensions. It has been no different this time. In the last one month, armies of both countries have propped up their artillery guns, stocked up ammunition and readied defence deployments and positions.

The small islets which make up the Republic of China (Taiwan) have witnessed numerous drone “incursions” since August 4 that have kept both the military and the civilians on their toes. Chinese drones have been spotted over the waters surrounding Kinmen, Matsu, Dongyin and several other islets. In response, Taiwan is bolstering its defences on the outlying islands, in addition to making preparations on the main island.

On September 1, the Kinmen defence command spotted a drone in restricted air space just after midday. It was given a warning and when this was disregarded, it was shot down—a first during the ongoing tensions. This action demonstrated the seriousness with which Taiwan President Tsai Ing-wen is treating the continued violations of the Taiwan Strait’s median line and Taiwanese airspace by an aggressive China. The People’s Liberation Army did not claim the fallen drone. In fact, the PLA ignored the incident.

Taiwanese see the presence of unidentified civilian drones over the islets as part of China’s grey-zone tactics. In grey-zone warfare, the aggressor stops short of an actual war, but comes menacingly close, trying to exhaust the opponent by keeping them in a state of high alertness.

On September 4, Taiwanese troops found Chinese tea eggs (popular snacks made by slightly cracking a boiled egg and boiling it again in tea and sauce/spices) on a beach in Lieyu. The food package is suspected to have been brought by another Chinese drone; the incident was attributed to cross-strait social media fights.

Taiwan’s National Security Council, which advises the president on major national security policy decisions, is planning to tweak its defence policies to handle new-age threats. The existing policies take into account aircraft and missiles, but not drones.

Archipelagos like Kinmen and Matsu have long been governed by Taiwan. Kinmen, also called the golden gate of Taiwan, faced the brunt of the PLA’s ferocity when Kuomintang leader Chiang Kai-shek fled to Taiwan with his forces in 1949. They managed to prevent the PLA from taking control of the island, which is of strategic importance today. “Kinmen also faced heavy shelling in 1958 when China launched a large-scale artillery attack, but with its strong fortresses and positions, it reported few casualties,” said Shen Ming-shih, acting deputy CEO of the Institute for National Defense and Security Research, Taiwan. He added that the US had also provided large artillery guns and ammunition then.

In the face of a possible Chinese attack, the defence deployment and positions of Kinmen and Matsu are very strong, said Shen. However, he added that after cross-strait tensions eased in 1991, deployment and defence positions in Kinmen and Matsu were scaled down and some places were even opened to tourists. Kinmen has a large, hillside, indoor space—Chintien hall—where troops can be sheltered without being spotted by China. “The command post and barracks at Kinmen were underground bunkers,” said Shen. “However, because of the changed situation, barracks were made over ground and troops would move underground only during an emergency.” Now, the Taiwanese military is considering refurbishing its positions in the outlying islands.

Both China and Taiwan are keen to avoid an escalation and understand the importance of the golden gate. Kinmen is the gateway for people travelling to Xiamen and enjoys deep economic, cultural and social ties with the mainland. When Tsai was the chair of the Mainland Affairs Committee after the Democratic Progressive Party came to power in 2000, she established the mini three links (mail, transportation and trading) between the outlying islands and China. Direct, cross-strait flights started a few years later. Shen said the mini three links were suspended because of Covid-19. “But, they hold the promise to resume in the future and will be useful for businessmen and tourists,” said Shen. The ruling DPP and the opposition Kuomintang, which holds sway in some of the islets, both appreciate the need to restore normalcy.

Chen Kuan-ting, CEO of the Taiwan NextGen Foundation, said that like many mature economies, Taiwan, too, has its share of opportunities and challenges as it attracts tourists and investments from all over the world. “The problem we are facing today is from China, but we can overcome these challenges by getting closer to our allies like the US, Japan and India, and ensure that our security is guarded collectively.”

Meanwhile, Taiwan is also preparing its 20-million-plus civilian population to guard their country. Puma Shen, chairperson of DoubleThink Labs, which is battling Chinese disinformation campaigns, has taken the lead in training civilians in self-defence and guerrilla warfare. “We started training civilians in self-defence last year because of rising military tensions with China. Even though our country will not initiate a war, we need to be prepared to defend ourselves,” Puma told THE WEEK.

According to him, military training is not a new experience for the islanders. Taiwan has followed a policy of conscription for all males above 18; they learn basic defence skills for a year. The policy is now proving useful. “There is much enthusiasm to join the self-defence course,” said Puma. “Slowly, we are planning online classes as well to cover the entire population. We are holding basic courses and advanced ones. We have already trained our population in disaster control measures.”

There is also emphasis in Taiwan on creating civilian cyber armies to aid its already strong cyber defence army.

As Beijing’s grey-zone warfare continues, the need of the hour for Taipei is greater collaboration with friendly countries.