Dom Pedro I's heart: Brazil embraces its imperial past with pride and respect

Brazil's bicentennial celebrations come to a head on September 7 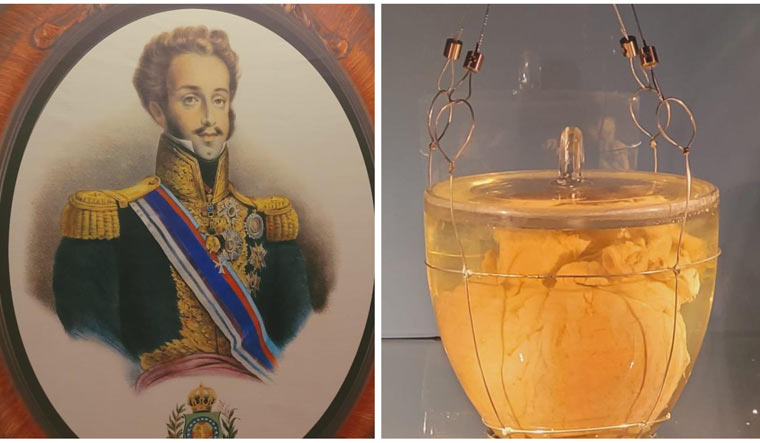 “This is where it all began,” whispered a woman at the solemn exhibit in the Jose Bonifacio Hall of Brazil's Itamaraty Palace in Brasilia as she approached the heart of Emperor Pedro I. Her throat knotted and eyes welled as she stood quietly before the relic, but her emotional words recognised in that moment that it was from that beating heart that came the first step in the trajectory Brazilian nationality. She articulated a resurgent understanding of the country's history with honour and pride in its imperial past.

As the country's bicentennial celebrations come to a head this September 7, the topic of Brazilian identity and the very essence of its statehood came down from the heavens onto its capital Brasilia, in the form of an escorted Brazilian Air Force plane carrying the heart its first emperor.

By receiving the heart in a state visit, Brazil returned Pedro I to the public imagination and its collective conscious as a Brazilian hero, the founder of the empire who is relevant and alive in the national glory of the republic.

It hasn't always been so, but Brazil is coming to terms with the celebration of its September 7th 1822 day of independence as a commemoration of the seminal work of sovereignty and nation-building by Dom Pedro as its founder, writer of its first constitution, and composer of its National Anthem of the Empire of Brazil, now known as its Hymn of Independence.

''The heart of Dom Pedro I back in this country's capital is full of profound emotional meaning. It represents the fight for freedom deep in the soul of Brazilians. It brings power and courage to the country,'' said Malcolm Forest, composer of''Libertas Brasil,'' a fantasy on the''Hymn of the Independence of Brazil'' music composed originally by Dom Pedro I, a piece performed at the opening ceremony of the exhibit.

In a country that lacks a unified network of monuments that reinforce its history and founding myth, in Brasilia, the city meant to showcase to the world a unique brand of Brazilian architecture and monumental blueprint, the heart of the first emperor was paraded past a colonnade of the Independence Dragoons, the red-plumed Brazilian Presidential Honor Guard wearing the uniform that was that of the Emperor's Honor Guard.

It was a sight worth seeing, representatives of the different bodies of state, and diplomatic corps, the head of the Imperial House of Brazil, Dom Bertrand de Ordeans e Braganca presenting a medal commemorating the bicentennial of Brazil to President Jair Bolsonaro, with Austrian ambassador Stefan Scholz standing in honour of the contribution and participation of Austrian-born Emperatriz Dona Maria Leopoldina in the independence and architecture of the new nation.

The strains of the national anthem and the Hymn of Independence whose melody Pedro I composed were played as the heart made its way up the plank to Planalto Palace. A cannon salute, a smoke squadron and aerial acrobatics planes flew the length of the capital's grand Monumental Axis, down its Esplanada of Ministeries toward Three Powers Plaza and drew a heart of smoke in the late afternoon sky.

As the heart ascended toward the presidential Planalto Palace, in the shadow of the monument to republican proto-martyr Tiradentes, a precursor of Brazilian independence executed by the Portuguese Crown before Pedro was even born, in the currents of the republic's history and its imperial origins, the emperor's heart became a powerful multi-generational, if ephemeral, monument that plucked the sentiments of the present out of the pages of history and projected Brazil to its future.

The moment's colour added majesty and was made grander by the presence of the 19th-century brilliant, white-cross-belted blue coat uniforms and red caps of Brazil's Duque de Caixas Presidential Battalion, first organised as the Emperor's Battalion after the 1822 Cry of Independence,''Independencia ou morte,'' by Dom Pedro, that ended Brazil's colonial era.

The golden urn containing the heart was then taken to the Itamaraty foreign relations building on the open convertible Rolls Royce used by Brazilian presidents on their inaugural journey, this time with two flags at the front, the Brazilian and Imperial flags. The cortege was escorted by a mounted regiment of the Dragoons of Independence Honor Guard, harking back to imperial times.

“I was full of emotion,'' said 58-yr-old Maria Mendes of Brasilia, after visiting the emperor's heart.''It is a most wonderful gift we could receive, it is very powerful, the history of our nation. It means hope.''

“The heart of Dom Pedro says everything, it represents everything, emotionally, materially. Standing before that heart, a Brazilian lets the heart penetrate his identity, it revives nationalism in one's own heart,'' said Paulo Mota, among some 1,300 people a day having spent some 90 minutes in line to visit the heart.

Pedro was the prince regent of Brazil, heir to the Portuguese throne who rebelled against a plan to revert Brazil to colony status after having been granted co-equal kingdom status while the Portuguese royal family escaped the invasion by Napoleon. When the British defeated Napoleon at Waterloo, the thread subsided, and Portugal wanted its old colonial-power status back.

On September 7, 1822, on the banks of Sao Paulo's Ipiranga River, after what historians describe as a''heroic journey'' inspired as much by his own values as the ideals of Emperatriz Leopoldina as well as his adviser Jose Bonifacio, Dom Pedro cried ''Independence or death,'' in what became the foundational moment of Brazil's national identity as well as of the young prince who would then be proclaimed Emperor of Brazil, a free nation.

It is Dom Pedro's legacy in this proclamation of the country as an independent state-nation that makes him the fundamental figure in shaping Brazil's identity. It all began there, as the woman in front of the relic said, for many Brazilians that is the origin of the''patria amada'', the beloved homeland.

Over the years that has been controversial, mired in a dispute over whether it was Tiradentes who began the process of independence.

But it was Dom Pedro who declared independence separating his adopted land from Portugal, it was Dom Pedro whose heroic act of defiance looms large into the national memory and consciousness. Though he was later forced into exile, abdicating to his son, Pedro II, and he went on to become Portugal's King Pedro IV, he remains crucial to a civil understanding of Brazilian independence.

Yet the arrival of the emperor's heart comes during a comparative commemorative obscurity with few visible official events in contrast to the country's centennial celebrations that had national and international events planned years in advance and were a platform to show Brazil's grandiose history and promised future to the world.

The visit takes place 50 years after the remains of Pedro I peregrinated Brazil in a sesquicentennial event that brought him from his burial place in Portugal to eventual entombment in the Imperial Crypt in Independence Park in Sao Paolo.

It was not uncommon in the Europe of the time for hearts to be buried separately from the body, but it was a special request by Pedro that his heart be kept in a church in Porto, in recognition of the love the people of the city showed him upon his return and their support in his war against his brother who had diverged into tyrannical rule. There it has remained in the church of Lapa since his death from tuberculosis at the age of 35 in 1834. It was exposed to the people of Porto for the first time two days before its journey to Brazil.

The heart was guarded and transported by the Chief of Police of the City of Porto and was received by President Bolsonaro, First-Lady Michelle Bolsonaro, and Foreign Relations Minister Carlos Franca in a high ceremony reserved for heads of state. It will return to Porto on September 10-11.

Opinions, ideas, and passions about the memory and the legacy of the emperor have made their way into various media of communications both in favour and against the visit of the relic since the idea was approved by Bolsonaro. However, among those waiting in line for visitation with the heart, there was respect for the country's past and the symbolic and historical meaning of the presence of the emperor's heart in ''the hearts of the people''.

“It is the history of my country,'' said Josilda Moraes, nearly overcome by the moment, her eyes glassy and wet with feelings. ''And emotion, I feel Brazil... I feel pride of being Brazilian.''

“A lot of pride,'' said teacher Veronica relating how she felt when she was about to see the heart. ''I am an admirer of Dom Pedro. The empire brought many good things, some bad things as well, but in balance many more good things. I think it was an important period in our history that we need to remember. It's in the hearts of the people.''

“It is what makes Brazil Brazil,” said Vinicius Xavier from Sao Paulo state.

“Emperor Dom Pedro I and his spouse Empress Dona Maria Leopoldina are two of the Founding Fathers of Brazil. They both were born in foreign countries and loved dearly this country. Their worthiness for Brazil is seen in growing glory,'' said Malcolm Forest, summoning a resurging sentiment for the monarchy.