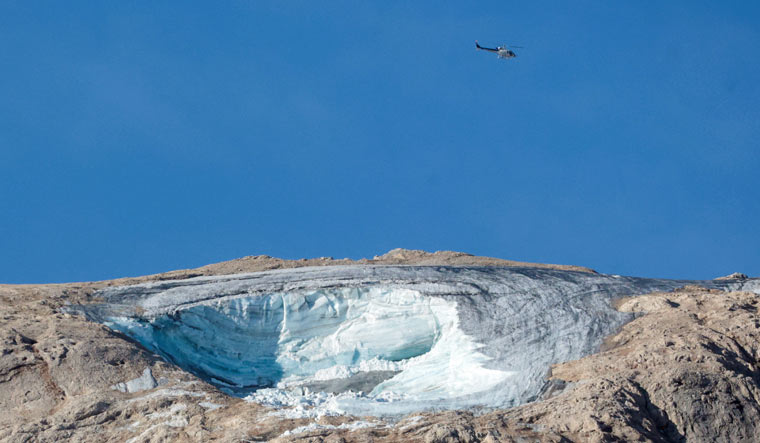 Punta Rocca summit is seen after parts of the Marmolada glacier collapsed in the Italian Alps amid record temperatures, killing at least six people and injuring several, at Marmolada ridge, Italy, July 4, 2022 | Reuters

A large chunk of Alpine glacier broke loose Sunday afternoon and slid down a mountainside in Italy, sending ice, snow and rock slamming into hikers on a popular trail on the peak killing at least five and injuring eight, authorities said. “There are five dead among the people hit by the detachment of the serac,” the emergency service's tweet said, referring to a technical term for a pinnacle of a glacier. The SUEM dispatch service, which is based in the nearby Veneto region, said 18 people who were above the area where the ice struck will be evacuated by the Alpine rescue corps. “A breaking away of rock provoked the opening of a crevasse on the glacier, leaving about 15 people involved,” the emergency dispatchers tweeted.

The Alpine rescue service said in a tweet that the segment broke off near Punta Rocca, along the itinerary normally used to reach the peak. “The heat is unusual,'' Walter Milan, an Alpine rescue service spokesperson told RAI state TV, noting that temperatures in recent days on the peak had topped 10 C. “That's extreme heat” for the peak, Milan added.

According to authorities, fifteen people are missing after ice, snow and rock fell on the popular trail on Marmolada mountain in the Dolomites. Emergency services spokeswoman Michela Canova told AFP the total number of climbers affected was unknown because the glacier fall hit an access path at a time when there were several roped parties there, some of whom were swept away.

Rescue dogs and at least five helicopters were involved in a search for the missing on Sunday. The operations were however put on hold amid fears that more of the glacier could come away. Some of the people trekking in the area where ice and rock broke off, were tied together by rope.

The reason for the avalanche could be an intense heatwave that has gripped Italy since late June.