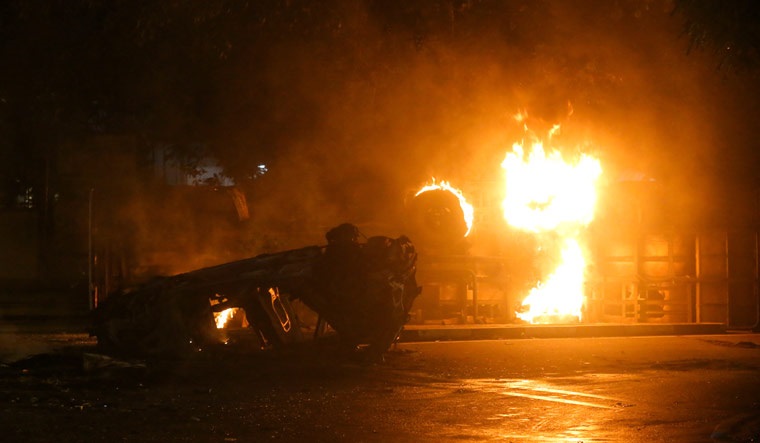 Violence rocked Sri Lanka on Monday as pro- and anti-government protesters clashed in several places even as the island country is reeling under the worst economic crisis in its history. As the law-and-order situation went out of hand Prime Minister Mahinda Rajapaksa tendered his resignation paving way for the formation of an interim government.

A ruling party MP and two others died in the clashes while properties of several ministers and leading politicians were torched by the protesters.

Amarakeerthi Athukorala, 57, a Sri Lanka Podujana Peramuna (SLPP) MP from the Polonnaruwa district, was surrounded by anti-government groups after a gunfire came from his SUV. According to reports, Athukorala fled and took refuge in a building and committed suicide by pulling his own revolver. Later, the lawmaker and his personal security officer were found dead, the police said.

The protesters set on fire a family house of Rajapaksa in Hambantota, around 250 km from Colombo. They also torched the house of MP Sanath Nishantha and the office  of former Minister Johnston Fernando.  The residence of former minister Nimal Lanza was attacked while Mayor Saman Lal Fernando's residence was set on fire. Ruling party Trade Leader Mahinda Kahandagamage's residence in Colombo was attacked. He was seen leading the charge on the two protest sites earlier in the day.

Police used water cannons to disperse the unruly ruling party protestors. The police formed a human chain to prevent the protesters from entering GotaGoGama. However, the mob pushed their way past the police human chain and attacked GotaGoGama. Around 154 people were injured in the violence.

In his resignation letter, the prime minister said he was quitting to help form an interim, unity government. "Multiple stakeholders have indicated the best solution to the present crisis is the formation of an interim all-party government," the letter said.

Nalaka Godahewa, a government spokesman, told Reuters that all cabinet members had also stepped down. "Now the president will invite other political parties to

form a unity government," he told the news agency, adding that the president will meet with independent and opposition political parties and a new government is expected in the next few days.

Sri Lanka has been witnessing unprecedented demonstrations for the last several weeks with the protesters demanding the resignations of Prime Minister Rajapaksa and his younger brother, President Gotabaya Rajapaksa. The agitators want an interim government to be formed to overcome the worst economic crisis facing the country.

At least 130 people have been injured in Monday's violence, prompting authorities to impose a nationwide curfew and deploy army troops in the capital. The defence secretary has urged public support to maintain peace in the country, while three-armed forces have been called in to assist police for public security. Leave for all police personnel were cancelled until further notice.

Sri Lanka is currently in the throes of unprecedented economic turmoil since its independence from Britain in 1948. The crisis is caused in part by a lack of foreign currency, which has meant that the country cannot afford to pay for imports of staple foods and fuel, leading to acute shortages and very high prices.