Sweden: Three wounded as cops fire on rioters over plan to burn Quran

17 people were arrested and several vehicles were set on fire 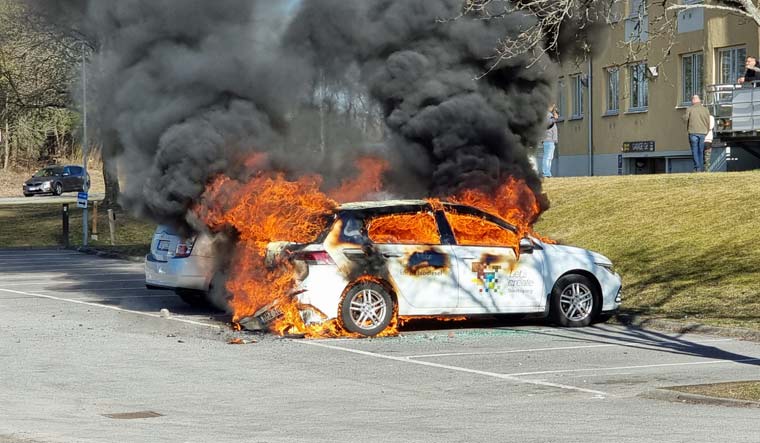 Smoke billows from a burning car during a riot ahead of a demonstration planned by Danish anti-Muslim politician Rasmus Paludan and his Stram Kurs party, which was to include a burning of the Muslim holy book Koran, in Navestad, Norrkoping, Sweden April 17, 2022 | Reuters

Three people in the Swedish town of Norrkoping sustained bullet injuries after police fired rounds at people protesting Quran burnings. Riots broke out between demonstrators and counter-protesters in the central city of Orebro on Friday ahead of an anti-Islam far-right group's plan to burn a Quran there. Sunday marked day three of the clashes, as protests continue.

17 people were arrested and several vehicles were set on fire. Two days of riots in various Swedish cities and towns, triggered by Stram Kurs' demonstration, culminated in the violent clashes in Orebro late Friday that left 12 police officers injured and four police vehicles set on fire.

The Danish right-wing Stram Kurs party in the southern town of Landskrona had planned a demonstration to burn the Quran on Saturday.

Stram Kurs' leader Rasmus Paludan was also planning a Quran burning in Landskrona. Paludan, a Danish lawyer who also holds Swedish citizenship, set up Stram Kurs, or Hard Line in 2017. The website of the party, which runs on an anti-immigration and anti-Islam agenda says Stram Kurs is the most patriotic political party in Denmark.

Earlier on Saturday, the Iranian and Iraqi governments summoned Swedish envoys to protest the burning.

Paludan was jailed for a month in 2020 on several charges including racism in Denmark and he has attempted burning the Quran in other EU nations like France and Belgium.