More than half of the population, are facing extreme famine this winter 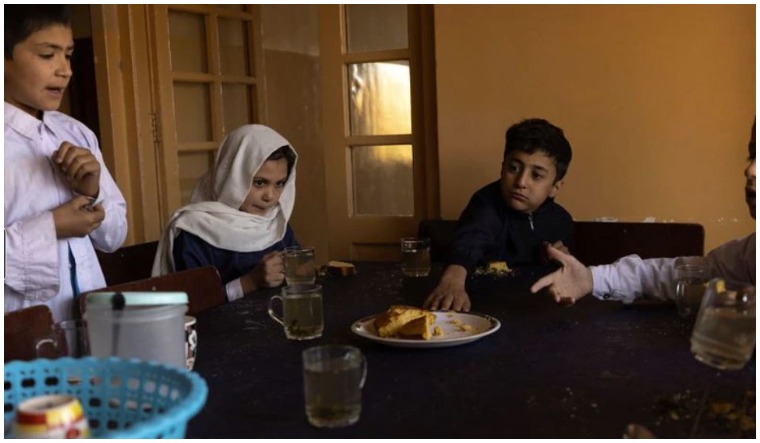 Samira, 9, and other children share tea and bread for breakfast at the orphanage before going to school in Kabul, Afghanistan, October 12, 2021 | Reuters

Afghanistan's former president on Sunday called a White House order to unfreeze $3.5 billion in Afghan assets held in the US for families of 9/11 victims of an atrocity against the Afghan people.

Former President Hamid Karzai at a packed news conference sought the help of Americans, particularly the families of the thousands killed in the 9/11 terrorist attacks, to press President Joe Biden to rescind last week's order. He called it unjust and unfair, saying Afghans have also been victims of al-Qaida leader Osama bin Laden.

Bin Laden was brought to Afghanistan by Afghan warlords after being expelled from Sudan in 1996. "This money does not belong to any government... this money belongs to the people of Afghanistan," Karzai said.

Meanwhile, Biden's order calls for the $3.5 billion allocated to humanitarian aid to be put into a trust and be used to assist Afghans, bypassing their Taliban rulers.

But Karzai demanded all $7 billion be returned to Afghanistan's central bank to further its monetary policy. He argued against giving Afghan reserves to international aid organizations to provide humanitarian aid.

He lobbied for the traditional Afghan grand council, or loya jirga, as a means to find consensus and establish a more representative administration.

“We, as Afghans, and the current acting Islamic government must do our best to not give America or any other country any excuse to be against us,” he said.

Anger has been growing in Afghanistan since Friday's White House announcement. Demonstrators marched again in Kabul on Sunday demanding the money be returned to Afghanistan. However, the Taliban, who have also condemned Biden's order, dispersed protesters as they tried to gather near the city's Eid Gah mosque.

Afghanistan is in dire need of humanitarian aid. According to the United Nations, approximately 23 million people in Afghanistan, or more than half of the population, are facing extreme famine this winter. 96 per cent of Afghans could fall into poverty by end of 2022 with millions on the verge of starvation.

The Taliban's claim to assets belonging to a government they fought to overthrow was never supported by evidence. The previous Afghan government received about 80 per cent of its funding from the international world. The country's economy went into a tailspin when that supply of funds was broken following the Taliban takeover last year. The funds had funded hospitals, schools, factories and government ministries. On Monday, Da Afghanistan Bank (DAB) said that it is auctioning off US dollars in what can be viewed as a last-ditch effort to help its economy. The bank said it would auction about $10 million on Wednesday “to increase the value of Afghan currency.” In the free market, $1would fetch 92.26 Afghan Afghani (AFN).

As per Biden's directive, of the $7billion in assets, half would be distributed as humanitarian relief in the poverty-stricken nation and half, that is $3.5 billion will be used to give compensation to victims of the 9/11 attacks. A trust fund would be set up, which would benefit Afghan people in a variety of ways. The bank urged a reversal of the decision and urged a release of all its reserves. The bank also said using the funds for 'irrelevant' purposes is an injustice to the Afghan people. The funds will be used to finance payments from lawsuits by US victims of terrorism that are still working their way through the courts, an AP report read.

The White House said in a statement that the order “is designed to provide a path for the funds to reach the people of Afghanistan while keeping them out of the hands of the Taliban and malicious actors.” the US, as of now does not recognise a Taliban government. The 9/11 victims have legal claims on the $7 billion in the U.S. banking system. The courts therefore will need to sign off when $3.5 billion will be taken for humanitarian aid in Afghanistan.

Taliban political spokesman Mohammad Naeem criticized the Biden administration for not releasing all the funds to Afghanistan.

“Stealing the blocked funds of Afghan nation by the United States of America and its seizure (of those funds) shows the lowest level of humanity . . . of a country and a nation,” Naeem tweeted on Friday.

The Taliban have called on the international community to release funds and help stave off a humanitarian disaster. Besides $7 billion in reserves, Afghanistan has $2 billion in reserves in Germany, United Arab Emirates and Switzerland. Afghanistan's economy is teetering on a collapse. The Taliban has promised that they would reopen schools for girls in March, but humanitarian workers have said that funds are needed to pay teachers. Taliban has repeatedly urged nations holding Afghan reserves to help the economy. Besides the $3.5 billion trust fund, which will be set up by Washington, the Biden administration offered $308 million in humanitarian assistance and implemented bills for its delivery.

Worldwide, personalities seemed against Biden's decision to utilise the money to help 9/11 victims. Jemima Goldsmith, Pakistan PM Imran Khan's ex-wife tweeted, “This is morally indefensible when Afghan mothers are selling their organs to save their children from starvation. Not a single Afghan was involved in 9/11. The average Afghan wasn’t even alive when that atrocity happened.”