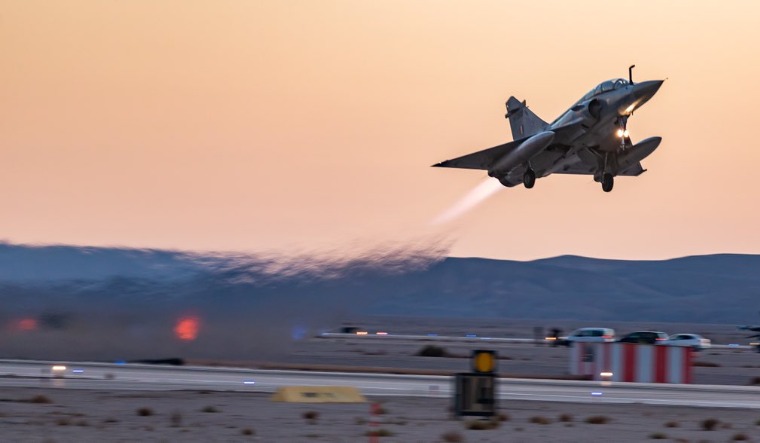 On Tuesday, External Affairs Minister S. Jaishankar, on a trip to Israel, visited an Indian Air Force contingent at an airbase in Israel. Five upgraded Mirage 2000 fighters of the Indian Air Force are in Israel to take part in the multilateral 'Blue Flag' exercise.

The Indian Air Force had participated in Blue Flag in 2017, but the current edition of the exercise is the first to see the deployment of fighter jets.

The Israeli Air Force had informed that the US, Germany, Italy, the UK, France, India and Greece have sent aircraft for the exercise. Blue Flag began on October 17 and will continue until October 28.

The Israeli Air Force has described the current edition of Blue Flag as "Israel's largest and most advanced aerial exercise ever".

"The exercise provides the opportunity to conduct joint tactical flights against a variety of threats using advanced technology. Throughout the exercise, the participating forces will drill air-to-air and air-to-ground combat, advanced surface-to-air missiles (SAM) threats, and various operational scenarios in enemy territory," an Israeli statement said.

The Israeli statement noted the exercise marked the first deployment of an Indian Mirage fighter unit to Israel.

The Mirage 2000 has been widely regarded as one of the most reliable aircraft in the Indian Air Force. It had been used in the Kargil war in 1999 and for launching the attack on Balakot in 2019. Interestingly, the attack on Balakot was carried out by using Israeli-developed SPICE guided bombs.

While the Mirage 2000 has often been referred to as just 'Mirage' in popular discourse, the latter was actually a name given by French manufacturer Dassault to a number of different fighter aircraft. The Mirage 2000 was the last of the series to use the name.

The first successful aircraft that bore the Mirage name and went into production was the Mirage III. The Mirage III, which first flew in 1956, was the first operational fighter in Europe to fly at twice the speed of sound.

The Israeli Air Force ordered the Mirage III in 1959 and received the first of over 70 aircraft in 1962. At the time, Israel and France had common strategic goals, primarily in countering the influence of Egypt, then ruled by president Gamel Abdel Nasser. Israel had supported the UK and France in their invasion of Egypt in 1956 to regain control of the Suez Canal.

It was the Six-Day War that made the world take notice of Israel as a military power. The Jewish state wiped out the air forces of Egypt, Syria and Jordan in a single day on June 5, 1967.

And the Mirage III played a key role in the conflict. The Mirage III jets were used by Israel to carry out the attacks on Arab airbases and also in air defence missions. The Israeli Air Force claimed its Mirage III jets downed 48 Arab aircraft in aerial combat.

The Six-Day War, arguably, served as an advertisement for the Mirage III. But the conflict also led to souring of ties between Israel and France.

The French government embargoed the sale to Israel of the Mirage V, a variant of the Mirage III. The Mirage V was developed in response to Israeli requests for an aircraft meant for ground attack missions and having more fuel capacity.

While France returned the money paid by Israel for the aircraft, the Jewish state did obtain the design for the Mirage V. A Swiss engineer, Alfred Frauenknecht, was arrested in 1969 for allegedly transferring design blueprints for the Mirage V to Israel. Frauenknecht, who was sentenced to four years’ imprisonment, had claimed he felt morally obliged to help Israel.

Both the Nesher and Mirage III would see action in the War of Attrition that followed the Six-Day War as well as the Yom Kippur War of 1973. By then, the US had begun supplying Israel aircraft such as the A-4 Skyhawk ground-attack jet and the heavier, multirole F-4 Phantom II. This led to the Israeli Air Force reducing reliance on the Mirage III and Nesher.

But Israel's tryst with the Mirage III was not over. In 1973, Israeli Aircraft Industries (IAI) conducted the first flight of the Kfir, a variant of the Nesher that used the US-built GE J79 engine, the same power-plant used by the F-4.

The J79 offered significantly more thrust than the Atar engines used by the Mirage III and Nesher, giving the new aircraft the capacity to carry over 5.5 tonnes of weapons or fuel. This was significantly more than the 4-tonne capacity of the Mirage III. The Kfir also had a modified design featuring 'canards' (small wing-like surfaces) on its front fuselage, which improved its agility.

The Kfir was used in Israeli conflicts in Lebanon in the 1980s. While the Mirage III and Nesher fleets were retired by the 1980s, the Kfir lingered on in service into the 1990s.

Israel also sold the Kfir to Colombia, Ecuador and Sri Lanka. The Kfir was even leased to the US Navy and Marines, who used it as an 'aggressor' aircraft to train fighter pilots.

In early 1997, Ezer Weizman became the first Israeli president to visit India. On the trip, Weizman offered to sell the Indian Air Force the Kfir fighter. The offer did not go anywhere, but highlighted the importance the aircraft held for Israel's defence industries.

The Kfir is still on offer to countries. In 2019, Israel offered to Colombia an upgrade of the Kfir named the Kfir NG that would have a new, more powerful engine and advanced radar. Not bad for an aircraft that evolved from a 1950s-era French jet!