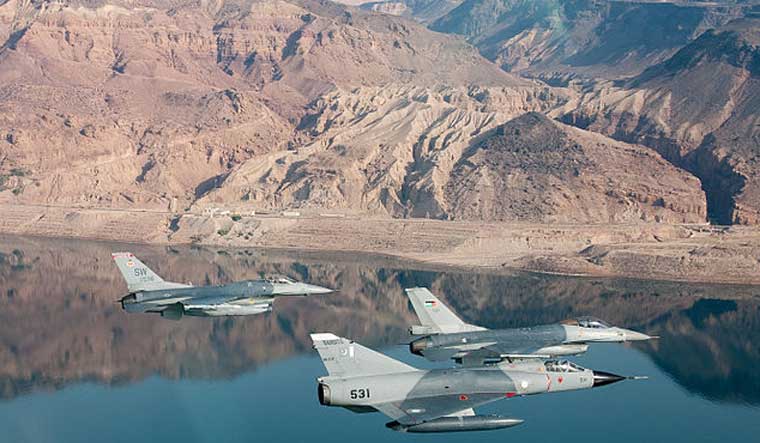 The report—Pakistani Nuclear Weapons, 2021—has already made headlines given its predictions that Islamabad's stockpile could grow to 200 warheads by 2025.

The report profiles the types of platforms meant to carry nuclear weapons, including ballistic and cruise missiles and aircraft.

The US-built F-16 is the Pakistan Air Force's most advanced fighter aircraft, and Islamabad continues to buy the JF-17 light fighter that was co-developed with China. But for nuclear strike missions, the Pakistan Air Force still relies on an aircraft it first inducted in 1967: The French-built Mirage III.

Since the late 1960s, the Pakistan Air Force started buying the Mirage III and its ground-attack derivative, the Mirage V. Given restrictions on buying F-16s from the US due to sanctions in the 1990s, Pakistan purchased used Mirage III and Mirage V jets from a number of countries including Lebanon, Australia and France. In the late 1990s, the Pakistan Air Force initiated a programme to upgrade the Mirage fleet, called the Retrofit of Strike Element (ROSE), to give it enhanced ground-attack capabilities.

Pakistani analysts claim the Pakistan Air Force used Mirage jets to attack an Indian base in Kashmir in response to the Balakot air strike in February 2019.

The Mirage III and Mirage V are inferior to the Mirage 2000 aircraft operated by the Indian Air Force as the latter is a heavier aircraft that has more advanced fly-by-wire flight controls.

The Bulletin of the Atomic Scientists report states, "The Mirage V is believed to have been given a strike role with Pakistan’ small arsenal of nuclear gravity bombs, while the Mirage III has been used for test launches of Pakistan’s Ra’ad (Hatf-8) air-launched cruise missile (ALCM), as well as the follow-on Ra’ad II ALCM. The Pakistani Air Force has added an aerial refueling capability to the Mirage, a capability that would greatly enhance the nuclear strike mission."

The report estimates Pakistan has earmarked 36 nuclear warheads for delivery by the Mirage III and Mirage V fighters. The report notes the aircraft have a range of 2,100km with external fuel tanks. The report notes the aircraft are capable of carrying one nuclear warhead with a yield of up to 12 kilotons. This is roughly equivalent to the destructive power of the US atomic bomb dropped on Hiroshima.

The report notes the Pakistan Air Force is developing the Ra'ad air-launched cruise missiles for carrying nuclear warheads. The Ra'ad has a range of 350km while the newer Ra'ad II can hit a target 600km away. The report notes, " All test launches involving either Ra’ad system have been conducted from Mirage III aircraft, indicating its likely delivery system upon deployment. There is no available evidence to suggest that either Ra’ad system had been deployed as of July 2021."

While noting that Pakistan has enhanced security for bases housing the F-16, the report concedes there is little evidence of the type being modified to carry nuclear weapons.

Referring to other platforms, the report notes that eight diesel-electric submarines Pakistan is buying from China would be equipped to fire the Babur 3 cruise missile, which could carry nuclear warheads. "Once it becomes operational, the Babur-3 will provide Pakistan with a triad of nuclear strike platforms

from ground, air, and sea," the report states. The Babur 3 is estimated to have a range of 450km.

The report also refers to the Shaheen 3 ground-launched ballistic missile, which has a range of 2,750km and could in theory target the Andaman and Nicobar Islands. Interestingly, it adds, "If deployed in the Western parts of Balochistan province, however, the range of the Shaheen-III would for the first time bring Israel within range of Pakistani nuclear missiles.”