The New Quad in West Asia just got newer

The word of the moment was 'synergy' 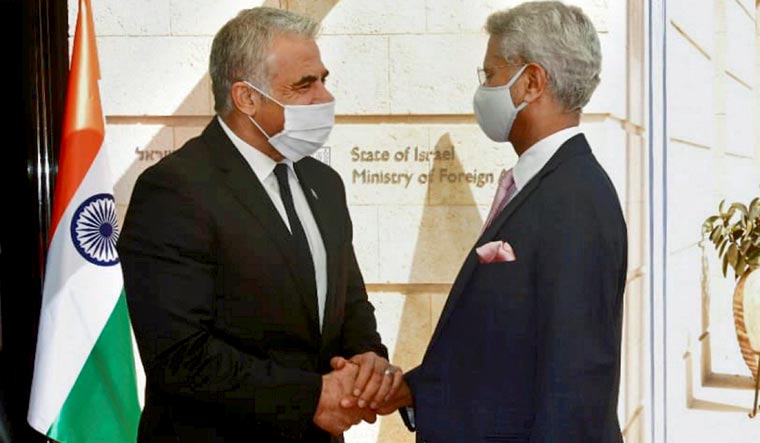 The New Quad just got newer. And it is an unusual band of four. On late Monday night, India's external affairs minister S. Jaishankar, US secretary of state Antony Blinken, Israeli foreign minister (and alternate PM) Yair Lapid and UAE foreign minister Sheikh Abdullah bin Zayed met, albeit virtually. Topics discussed were trade, maritime security, energy cooperation and climate change. But it was a declaration of intention and certainly history in the making.

“A fruitful first meeting,'' tweeted Jaishankar. “Discussed working together more closely on economic growth and global issues. Agreed on expeditious follow-up.'' The word of the moment was synergy. “I think the word we’re looking for here is synergy because this is what we’re going to try and create, starting with this meeting. A synergy that will help us work together on infrastructure, digital infrastructure, transport, maritime security and other things that preoccupy us all,'' said Lapid at the meeting.

While the meeting, as well as the enthusiasm around it, indicates the cementing of the Abraham Accords, it also underlines how serious the US is about finding ways to battle China. The meeting comes at a time when China has been expanding its economic embrace across the world.

It also comes close on the heels of the trilateral meeting between the UAE, Israel and America on October 13. A press statement issued by the US State Department for the meeting read that Blinken “welcomed'' the new warming of Israel and the UAE, “including the opening of respective embassies, the appointment of ambassadors, new direct flights, dozens of cultural exchanges, and burgeoning economic and business ties''. The meeting, an important milestone, came at a time there was growing Chinese influence in the region.

It is no secret that the China-Israel relationship has become much deeper in the past few decades. The Shanghai International Port Group Company signed a deal with Israel’s transportation ministry in 2015 to build and run Haifa’s commercial port. Reports claim that the Israeli government did not allow the US Coast Guard to inspect the port at Haifa for Chinese surveillance capabilities last year. The UAE too has had warm relations with China. The dragon is one of the top traders with the UAE and wants to expand its military trade with the region. So, it makes sense for Uncle Sam to bring everyone together under one umbrella. For India too, the grouping helps—especially as India inches closer to the UAE and Israel. Move over twosome; diplomats prefer the foursome these days.