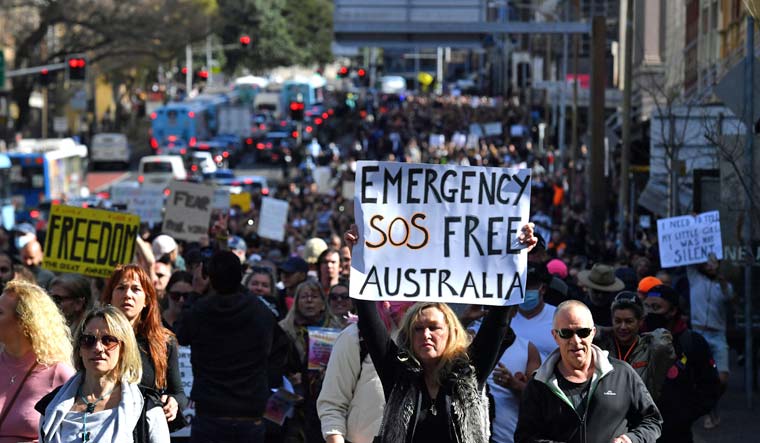 Protesters march through the city centre during an anti-lockdown rally as an outbreak of the coronavirus disease (COVID-19) affects Sydney, Australia | Reuters

Thousands of people took to the streets of Sydney and other Australian cities on Saturday to protest lockdown restrictions amid another surge in cases, and police made several arrests after crowds broke through barriers and threw plastic bottles and plants.

The unmasked participants marched from Sydney’s Victoria Park to Town Hall in the central business district, carrying signs calling for 'freedom' and 'the truth'.
There was a heavy police presence in Sydney, including mounted police and riot officers in response to what authorities said was unauthorized protest activity. “The priority for NSW Police is always the safety of the wider community,” a police statement said.

Protestors arrested by police at Sydney Town Hall.
The protest comes as COVID-19 case numbers in the state reached another record with 163 new infections in the last 24 hours.

Greater Sydney has been locked down for the past four weeks, with residents only able to leave home with a reasonable excuse. In Melbourne, thousands of protesters without masks turned out downtown chanting “freedom”. Some of them lit flares as they gathered outside Victoria state’s Parliament House.

They held banners, including one that read: “This is not about a virus it’s about total government control of the people”.

Some 160,000 people, including far-right activists and members of France's yellow vest movement, protested Saturday across the country against a bill requiring everyone to have a special virus pass to enter restaurants and mandating COVID-19 vaccinations for all health care workers.

Similar protests were held in neighbouring Italy. Police fired water cannons and tear gas on rowdy protesters in Paris, although most gatherings were orderly.
While most protesters were calm, tensions erupted on the margins of the Bastille march. Riot police sprayed tear gas on marchers after someone threw a chair at an officer. Other projectiles were also thrown. Later some protesters moved to the Arc de Triomphe and police used water cannon to disperse them.

Marchers included far-right politicians and activists as well as others angry at President Emmanuel Macron. More than 111,000 people with the virus have died in France, and the country is now seeing about 20,000 new infections a day, up from just a few thousand a day in early July.

More than 2 billion people worldwide have been vaccinated and information about COVID-19 vaccines is now widely available, but many protesters said they felt they were being rushed into something they're not ready to do.
Cline Augen, a secretary at a doctor's office, is prepared to lose her job under the new measure because she doesn't want to get vaccinated.