The Department has charged three girls with assault and robbery 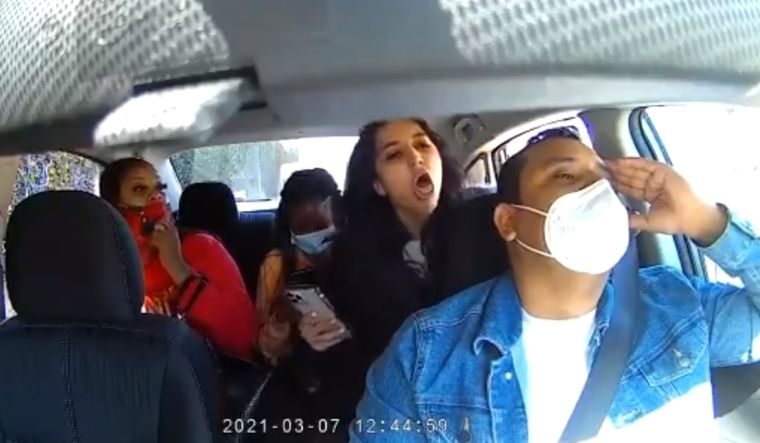 A screengrab of the incident

The woman rider, who attacked a San Francisco Uber driver inside his cab, has now been charged with multiple felonies for the alleged crime.

US citizen Arna Kimiai allegedly shouted racial slurs and coughed up Uber driver Subhakar Khadka when he asked her to wear a mask. She has been charged with first-degree attempted robbery and assault in addition to being charged for violating the COVID-19 protocol, the San Francisco District Attorney's Office told the media.

If convicted on these charges, 24-year-old Arna Kimiai, could face up to 16 years imprisonment and  $3,000 in fines. She was booked into San Francisco County Jail after surrendering to San Francisco Police on 14 March.

32-year-old Subhakar Khadka, who migrated to the US from Nepal eight years ago,  was assaulted by three women who hailed his vehicle on March 7.  Khadka released footage to a local news station on the same day and the video went viral on Instagram and Twitter.

The women were picked up by Subhakar at the intersection of San Bruno and Felton street in San Francisco. The driver stopped the ride when the women refused to wear their masks.

Drivers and passengers in the US must wear face masks as part of health rules to contain the Covid pandemic.

In the video footage, Kimiai's friend Malaysia King, 24, was seen shouting “I’ve got corona” while Kimiai tried to snatch Khadka's mobile phone from the dashboard  of the car and pulled down his mask. The women can also be heard telling the driver: "F*** the masks. After Khadka decided not to go ahead, they exited the car and one of them sprayed pepper spray toward Subhakar. Malaysia King was arrested after the incident.

In a statement the cab aggregator said, "Behaviour seen in the video is appalling.”  Uber also suspended Kimiai from using their cabs and provided Khadka with $120 in cleaning funds.