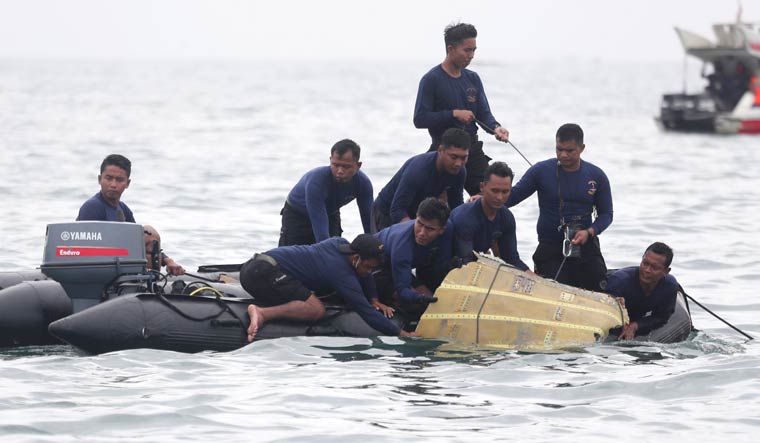 Indonesian Navy divers pull a part from an airplane out of the water during a search operation for the Sriwijaya Air passenger jet that crashed into the sea near Jakarta, Indonesia, Sunday, Jan. 10, 2021 | AP

Indonesian authorities have said they located the position of both black boxes that were on board Sriwijaya Air Flight 182, which crashed into the Java sea with 62 passengers on board on January 9.

“We have located the position of the black boxes, both of them,” said Soerjanto Tjahjono, head of Indonesia’s National Transportation Safety Committee, AFP reported. “Divers will start looking for them now and hopefully it won’t be long before we get the,” he added.

On Sunday, Indonesian rescuers recovered body parts, pieces of clothing and metal pieces from the Java Sea. There has been no sign of any survivors so far.

The aircraft, a Boeing 737-500, was 26 years old and in good condition, Sriwijaya Air chief executive Jefferson Irwin Jauwena was quoted as saying. The flight’s take-off was delayed for 30 minutes due to heavy rain.

The 737-500, the smallest of the classic 737 models, was being retired across the world, from the US’s Southwest Airlines to Japan’s All Nippon Airways.

According to Flightradar 24, the plane descended over 10,000 feet in less than a minute.

The location of the crash was also near where Lion Air flight 610 crashed in 2018, a crash that led to the eventual grounding of the Boeing 737 MAX line of aircraft, after another crash took place in in Ethiopia by the same aircraft model. A problem was later identified with the 737 Max’s flight controller, which caused the airplane to suddenly pitch downwards.

Just a few days prior, on January 7, Boeing agreed to a pay $2.5 billion as a settlement charge for a US Justice Department investigation that found that employees deliberately misled regulators about the safety of the 737 Max aircraft, whose problems were known to staff months before the crashes took place. This amount includes compensation money for crash victim’s families, airline customers, and a fine.

In November 2020, the 737-MAX was cleared to fly again after completing a series of recertification flights.

The 737-500 did not have the Manoeuvring Characteristics Augmentation System (MCAS) that was deemed responsible for the 737-MAX’s issues.