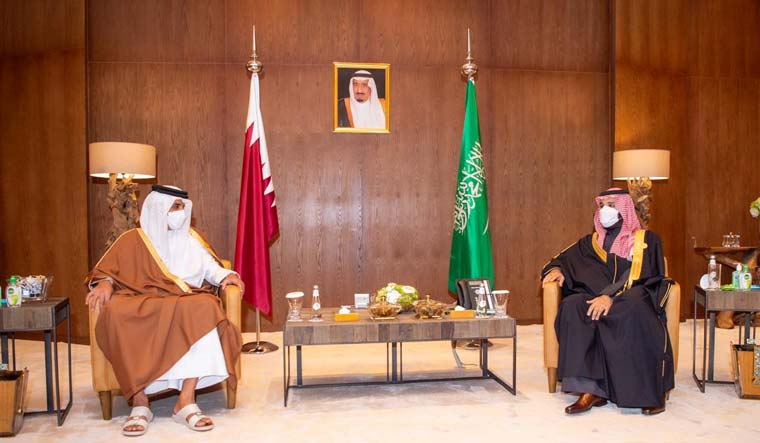 Saudi Arabia and its Gulf allies Egypt, the United Arab Emirates and Bahrain have announced the Al-Ula agreement to restore ties with Qatar. Saudi Arabia will reopen its land borders with Qatar, three years after it and its allies cut land, sea and air access to the country over alleged links to Iran-backed terrorist outfits.

The Al-Ula Declaration that will be signed at this summit "affirms the importance of the solidarity and stability in the Gulf, Arab and Islamic countries and strengthens the bonds of friendship and brotherhood among our countries and peoples in order to serve their aspirations," Crown Prince Mohammed bin Salman said.

"Today, we are in utmost need to unite our efforts to advance our region and confront the challenges that surround us, particularly the threats posed by the Iranian regime's nuclear program, its ballistic missile program, its destructive sabotage projects as well as its terrorist and sectarian activities adopted by Iran and its proxies to destabilize the security and stability in the region," he added.

"These actions put us in a position to call the international community to work seriously in order to stop these programs and projects that threaten regional and international peace and security. "

"Breaking: Saudi Arabia, Qatar & other Gulf states to sign U.S. / Kuwait brokered deal to end the Gulf rift. MAJOR achievement in the Middle East by @realDonaldTrump team under leadership of Jared Kushner and @AviBerkow! This follows a slew of historic Middle East peace deals" she tweeted,

Earlier on Tuesday, Qatar's ruling emir arrived in Saudi Arabia and was greeted with an embrace by the kingdom's crown prince on Tuesday, following an announcement that the kingdom would end its year's long embargo on the tiny Gulf Arab state.

The decision to open borders was the first major step toward ending the diplomatic crisis that has deeply divided US defence partners, frayed societal ties and torn apart a traditionally clubby alliance of Arab states.

The arrival of Sheikh Tamim bin Hamad Al Thani to the kingdom's ancient desert city of Al-Ula was broadcast live on Saudi TV. He was seen descending from his plane and being greeted with a hug by Saudi Crown Prince Mohammed bin Salman.

The diplomatic breakthrough comes after a final push by the outgoing Trump administration and fellow Gulf state Kuwait to mediate an end to the crisis. It wasn't until late Monday on the eve of the summit and just ahead of President-elect Joe Biden's swearing in that the major step to ending the spat was announced.

The timing was auspicious: Saudi Arabia may be seeking to both grant the Trump administration a final diplomatic win and remove stumbling blocs to building warm ties with the Biden administration, which is expected to take a firmer stance toward the kingdom.

Qatar's only land border has been mostly closed since June mid-2017, when Saudi Arabia, Egypt, the United Arab Emirates and Bahrain launched a boycott of the small but influential Persian Gulf country. The Saudi border, which Qatar relied on for the import of dairy products, construction materials and other goods, opened briefly during the past three years to allow Qataris into Saudi Arabia to perform the Islamic hajj pilgrimage.

It was unclear what concessions Qatar had made regarding a shift in its policies.

At heart have been concerns that Qatar's close relations with Turkey and Iran have undermined regional security. Egypt and the UAE view Qatar and Turkey's support of the Muslim Brotherhood as a security threat and have deemed the group a terrorist organization. Saudi Arabia and Bahrain are primarily concerned with Qatar's close ties with regional foe Iran.

Those simmering tensions came to a boil in the summer of 2017, when the four countries announced their boycott of Qatar and cut all transport and diplomatic links with it. The move separated families who'd intermarried with Qataris and ended years of visa-free travel for Qataris in parts of the Gulf. It also pushed Qatar diplomatically closer to Turkey and Iran, which both rushed to Doha's aid with food and medical supplies in the first days of the embargo. Patriotic fervor swept through Qatar in support of Sheikh Tamim's resolve.

Gas-rich Qatar also took an economic hit from the boycott, and its national airline was forced to take longer and more costly routes. It was unclear how the embargo would impact its ability to host the 2022 FIFA World Cup.

The boycotting countries made a list of demands on Qatar that included shuttering its flagship Al-Jazeera news network and terminating Turkish military presence in Qatar, which is also home to a major U.S. military base. Qatar has outright rejected the demands and has denied supporting extremists.