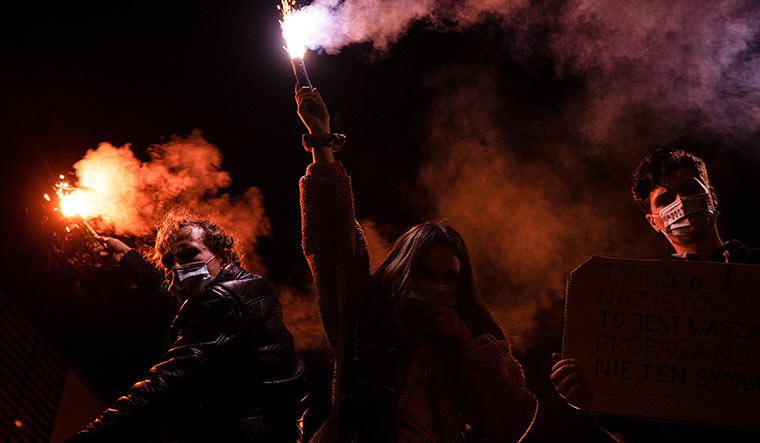 People protest against the ruling by Poland's Constitutional Tribunal that imposes a near-total ban on abortion, in Gdansk, Poland October 28, 2020 | REUTERS/Jadwiga Figula

Following a nationwide strike across Poland against a court ruling than bans abortions even in cases of congenitally damaged fetuses—making abortion virtually impossible given the country’s already strict laws around it—Polish President Andrzej Duda has appeared to backtrack on his government’s position.

Speaking to radio channel RMF FM, Duda said that women should have the right to abortion in cases of congenitally damaged fetuses. “It cannot be that the law requires this kind of heroism from a woman,” he told the station.

His new position is in contrast with his earlier views on abortion, when he welcomed the ruling by the Constitutional Tribunal. “I have said it many times and I have never concealed it, that abortion for so-called eugenic reasons should not be allowed in Poland. I believed and believe that every child has a right to life,” Duda told the Gazeta Prawna newspaper.

Under Poland's stricter abortion laws now, women can only terminate a pregnancy if it is the result of rape, incest, or if it will be a threat to their lives.

The ruling was followed by seven days of mass protests across Poland, as women’s rights activists called for women to take off from work in opposition. However, the country’s deputy prime minister, Jaroslaw Kaczynski, leader of the far-right Law and Justice party, called for his party supporters to take to the streets and “defend” churches, following incidents were protesters disrupted Masses and spray painted churches.

"You are destroying Poland," Kaczynski said in a message to protesters. "You are exposing a lot of people to death, you are criminal." Kaczynski’s view was that pregnancies involcing fetuses with birth defects that have no chance of survival outside the womb should still be allowed to take place so that the child can be “baptised, buried, have a name". Some saw Kaczynski’s address as a call to violence. However, the police have also warned demonstrators after the attacks on Churches.

Poland is a mostly-Catholic country.

“In light of plans being announced by organisers for further acts of aggression and profanation, the police will take decisive action. The goal of the police is to ensure public order and safety for all citizens,” the country’s Interior Ministry said in a statement.

Riot police were deployed across the country on Wednesday as tens of thousands participated in protests, with large crowds marching to the parliament building in Warsaw.

Addressing Polish pilgrims on Wednesday, Pope Francis urged them to remember the memory of St John Paul II who “always urged a privileged love for the least and the defenceless and for the protection of every human being, from conception to natural death.”