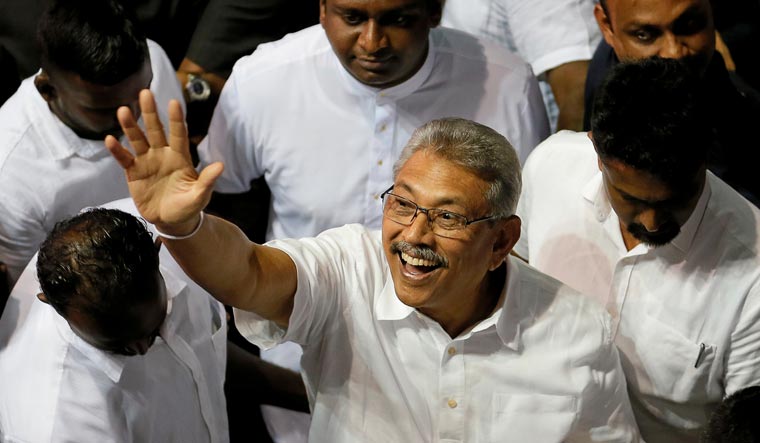 Sri Lanka's parliament on Thursday passed the 20th Amendment to the Constitution with two-thirds majority, consolidating the power in the hands of President Gotabaya Rajapaksa and undermining the authority of Parliament.

The second reading of the 20th Amendment was passed in Parliament with 156 MPs voting in favour of the bill and 65 against it in the 223-member Parliament. Only 213 members were present at the time of voting.

The interesting feature of the vote was six defections from the Opposition benches to government ranks.

With their dominant majority in the assembly, the Rajapaksas have made it clear that they would amend the Constitution to bolster the powers of the president, reversing the work of the previous government to introduce more checks and balances and enhance role of Parliament.

Activists, already alarmed by the diminishing space for dissent in the island nation fear that the latest amendment to the Constitution may lead to authoritarianism.

The bill was presented in Parliament on Wednesday for a two-day debate following which the vote took place on Thursday. The amendment would become a part of the country's basic law after Assembly Speaker Mahinda Yapa Abeywardena signs it.

The government on September 2 gazetted 20A to replace the 19th Amendment introduced in 2015 that curtailed the powers of the president and strengthened the role of Parliament.

The 20A is meant to annul the 19A which was seen as a pro-democracy, good governance amendment and called for checks and balances in the presidential system while making Parliament more powerful.

The 20A proposes to restore full legal immunity to the President, removing the provisions made in the 19A to take legal action against the President.

Throughout the debate, the ruling party leaders insisted that 19A was an impediment on the smooth functioning of the state as two political power houses being built around both the president who heads the executive and the prime minister who heads the Parliament.

The 19A was also branded as one adopted to target the powerful Rajapaksa family to subject them to politically whipped up charges of wrongdoing and to prevent some of the family members from staking a claim to high profile political offices.

The 20A was needed to preserve national security and to effect rapid economic development through an efficiency-based state administration, it was debated.

The government on Wednesday had said it would move as many as five amendments to the bill during the parliamentary debate.

"We will make three of the amendments asked for by the Supreme Court while adding two more of our own, Energy Minister Udaya Gammanpila had said.

The Supreme Court had ruled that the 20A as a whole was not unconstitutional except for the 4 clauses which needed a referendum. It said that Clauses 3,5,14 and 22 in the amendment in their present form are inconsistent with Article 3 read with Article 4 of the Constitution and requires a referendum.

The Attorney General, on behalf of the government, had pledged that amendments would be made at the committee stage so that no referendum would be required.

The thrust of the debate on Wednesday was that the 20A was only meant to restore the powers enjoyed by the president since the original 1978 constitution.

The Opposition's defence was that the 19A had depoliticised key areas of governance by preserving the rule of law. The 20A rolls back all that and makes one person the president- all too powerful with no checks and balances.

During the last November's presidential elections and last month's parliamentary elections, Gotabaya Rajapaksa said that the 19A had made governance difficult as it created a rift between the executive president and the prime minister.

President Rajapaksa was elected in November last year with a mandate to abolish the 19A.

Interestingly, the current prime minister is the president's elder brother Mahinda Rajapaksa, who was earlier president of the country for two terms.