Tibet’s government-in-exile warms up to the US

Meeting strengthens narrative that US will treat CTA like other govts: Lobsang Sangay 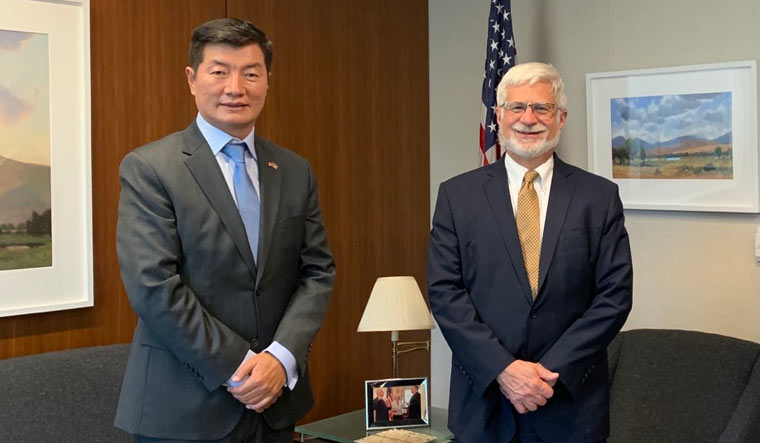 Trade, Taiwan and now Tibet: The latest prick in US-China ties brings India to the centre-stage with Lobsang Sangay, president of the Central Tibetan Administration (popularly known as the Tibetan government in exile) in Dharamsala visiting the US state department for the first time.

Sangay met Robert Destro, the newly appointed Special Coordinator for Tibetan issues on October 16, ringing alarm bells in Beijing. During the meeting, Sangay urged Destro to press the Chinese government to initiate dialogue between the envoys of Dalai Lama and the Chinese government based on the middle way approach, said an official of the CTA.

Sangay's visit to the US and his meeting with Destro is significant as it comes as tensions along the Indo-Tibet border are high. The continued Chinese military aggression in the Himalayan region has put a deep strain on India-China relations. Sangay mentioned the border tensions in his meeting with the White House officials. Destro is learnt to have assured support to the Tibetan diaspora and displayed keen interest to collaborate with the Tibetan exiled government in India to address their concerns.

''The unprecedented meeting further strengthens the narrative that the Central Tibetan Administration will be treated akin to other governments by the US State Department and it is yet another win for Tibetans and allies,'' said Sangay.

Destro's appointment and Sangay's visit marks the official recognition of the Tibetan government in exile by the Donald Trump administration and sends a strong message to China that the US is not only supportive of the Tibetan cause but will also not shy away from backing India's stance on the Dalai Lama and the exiled Tibetan government, which had operated from Indian soil for the last 60 years.

But experts warned that the diplomacy and psychological warfare must not be limited to a visit, assurances and a photo opportunity, and should instead open doors for a more holistic approach by New Delhi that can have a long-lasting impact.
Amitabh Mathur, the former advisor on Tibetan affairs to the union home ministry, said that in the Tibetan context, Nepal is a key player in the region as it shares a border with Tibet.

''The Nepal-Tibet border is a matter of concern for the Chinese. They have made sustained but as yet unsuccessful efforts to win over the loyalty of the inhabitants there who revere the Dalai Lama. We need to sustain our historical cultural links with these people and not allow the Chinese to subvert these. The role of the Nepal government will be critical,” says Mathur.

In the last few years, increasing bonhomie between China and Nepal has led to a crackdown on the movement of Tibetans wanting to flee China to enter India as well as the harassment of Tibetan refugees travelling from India to Nepal.

The developments leading up to Sangay's visit are the result of gradual warming up between the two in the last few years. Earlier, any meetings between exiled Tibetan leaders and US officials used to take place at undisclosed coffee shops where the discussions were neither officially documented nor photographed. But, now Sangay's official meetings with White House officials show that the exiled Tibetan government in India has grown to a position of strength. The Tibetan Policy and Support Act 2020 brought a significant shift in the US policy on Tibet as it made official the US stance on Dalai Lama—saying his successor will be appointed by him and the Tibetan Buddhist community without interference from the Chinese government.

Amidst the ongoing border tensions, New Delhi sent terse messages to Beijing by cracking down on trade, banning Chinese applications and pursuing an aggressive military build-up to counter Chinese manoeuvres. However, it had so far refrained from playing the Tibet card in terms of openly voicing its support to the Tibet cause espoused by the Dalai Lama.

A single visit of Sangay to the US State Department can put pressure on China which is already upset with Destro's appointment. Zhao Lijian, the spokesperson of Chinese foreign ministry had called Destro's appointment ''political manipulation'' designed to ''interfere in China's internal affairs and destabilize Tibet.''

Security officials said Sangay's meeting with Destro and his visit to the US State Department office is not only significant for the Tibetan refugees around the world but more importantly it is a message to the Tibetans living in Tibet. It is only when the Tibetan population in Tibet responds to these developments, that Beijing will feel the impact.

''China is upset because the Tibetan population living in Tibet is watching how the US is supporting the freedom struggle and that their voices are being heard,'' said an official.

From human rights concerns to environmental issues as well as the refugee struggle, the message needs to reach the Tibetans in Tibet, said an intelligence official.

On October 14, US Secretary of State Mike Pompeo announced that Destro, assistant secretary of state for Democracy, Human Rights and Labour would assume the additional charge of Special Coordinator for Tibetan issues. The appointment was a direct result of the changed US policy on Tibet affairs and Sangay's visit is a natural outcome of these developments.