2,400kg bomb from WW2 detonated in Poland while being defused 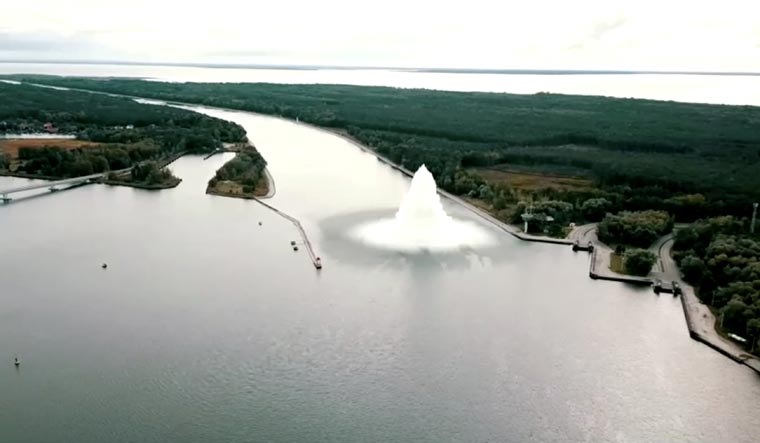 Seventy-five years ago in 1945, a bomb weighing 5,400kg and carrying 2,400kgs of explosives was dropped by the British Royal Air Force over what is now the Piast Canal, in an attempt to sink the German cruiser, Lusow.

The bomb evidently missed its target and sunk to the bottom of the water body. Now, 75 years since, while it was being defused, the bomb went off—triggering a gigantic underwater explosion.

#Tallboy, the largest unexploded #WWII bomb detonated💣
-
Lt Cmdr G.Lewandowski, 8th Coastal Defence Flotilla: The deflagration process turned into detonation. The object can be considered neutralised, it will not pose any more threat to the Szczecin-Swinoujscie shipping channel. pic.twitter.com/xHkRzAaONn

Breaking: Polish Navy reports that the largest ever unexploded WW2 bomb found in Poland, a 5.4 tonne British 'Tallboy' or 'earthquake' bomb, detonated prematurely during the defusing process. Fortunately all military divers were clear of the danger area. #BREAKING #BreakingNews pic.twitter.com/4oRav10fW5

The divers, who were attempting to safely burn away the explosive material in the bomb, were at a safe distance when the bomb went off. The process, known as deflagration, is used to safely dispose of explosives.

“The deflagration process turned into detonation. The object can be considered as neutralised, it will not pose any more threat,” Second-Lieutenant Grzegorz Lewandowski, the spokesman of the 8th Coastal Defence Flotilla, was quoted as saying by state-run news agency PAP.

The was the biggest explosive to be found in Poland after WW2.