Towns in France impose restrictions to contain COVID-19, Bordeaux is running out of ICU beds

Strap: Doctors fear they may not be able to treat new cases 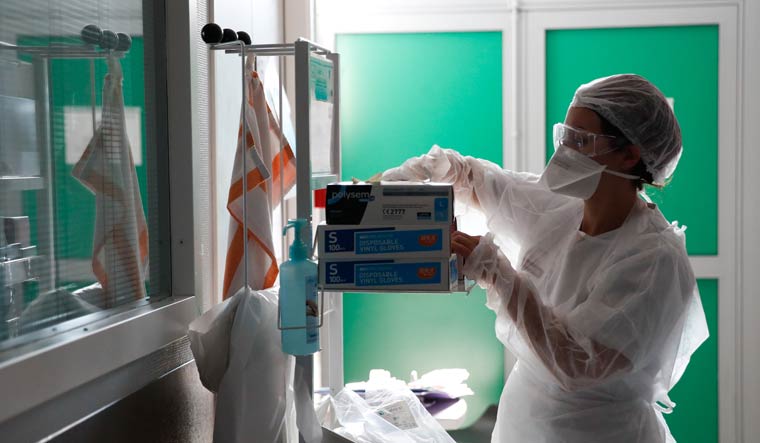 A nurse wearing a protective face mask works in the Intensive Care Unit (ICU) at the Robert Ballanger hospital in Aulnay-sous-Bois near Paris as the outbreak of the coronavirus disease (COVID-19) continues in France, September 15, 2020. Picture taken September 15, 2020 | REUTERS/Gonzalo Fuentes

Stricter sanitary measures have been announced in France's southwestern region Nouvelle-Aquitaine on Monday for public events and nursing homes to contain a spike in coronavirus cases.

With the country facing a resurgence in coronavirus cases and reaching record-levels of 10,000 new cases over the last weekend, the government has promised to speed up tests and toughen measures in high-infection zones.

In the meantime, with hospitalisations rising, the town of Bordeaux is running out of ICU beds. Dr Catherine Fleureau, director of the Bordeaux University Hospital was quoted in a CNN report as saying, "It's also going to be harder than last time, because this wave, I think, will grow progressively and then last over time."

Doctors are not sure that even with restrictions imposed by the government, the number of incoming cases will be manageable. Some hospitals are already nearing capacity in their ICU beds. Doctors fear that they may not be able to treat new cases if this continues.

Doctors and hospital staff in France, however, seem better equipped with steroids to help reduce COVID-19 symptoms, so that intubation rates can be reduced. 31000 out of 430000 COVID-19 cases have died in France so far. Considering the effect the crippling effect of the first lockdown on the French economy, the government isn’t too keen to go for a strict nation-wide lockdown a second time around. The government has imposed stricter measures in Marseille and Bordeaux, where the cases are high.

Funfairs, antique fairs and neighbourhood parties are banned. No more than 1,000 people are allowed to come together at public gatherings and public parks and other public areas like riversides are not to have more than ten people at a time. Cafes and restaurants will be allowed to serve only seated patrons and dancing in public venues is banned too.