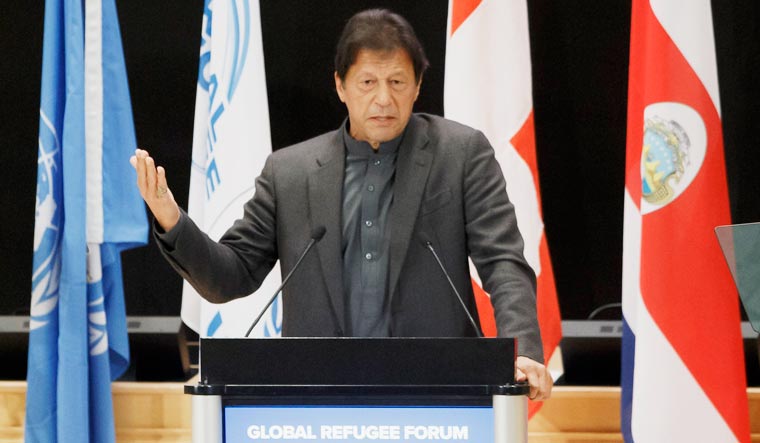 Pakistan continues to be roiled by outrage and protests over the gang-rape of a woman in front of her two children last week.

The incident happened when the victim's car ran out of fuel after midnight on the Lahore-Sialkot Motorway on September 9. She was attacked by two men as she was awaiting assistance from the highway police. The assailants took the victim and her two children to a field beside the highway, where she was gang-raped.

The incident led to outrage among politicians, celebrities and common citizens. Pakistan Prime Minister Imran Khan on Monday told a TV interview that he favoured exemplary punishment for sexual assault cases. Imran declared the "motorway gang-rape had 'shaken the entire nation' because the victim could have been anyone's sister or daughter," Dawn reported.

"They (rapists) should be given exemplary punishments. In my opinion, they should be hanged at the chowk (piazza)," Imran was quoted as saying by Dawn. The prime minister added such punishment should be reserved for rapists and child abusers.

However, Imran conceded the option of public hanging would not be "internationally acceptable". "Unfortunately, when we had the discussion, [we were] told it [public hanging] would not be internationally acceptable... They said the GSP-Plus trade status given to us by the European Union will be affected," Imran was quoted as saying by Dawn. Reuters explained, "The EU’s Generalized System of Preferences (GSP-plus) status, granted to Pakistan in 2014, is contingent upon observation of international conventions, such as human rights."

Imran said another option was to "chemically or surgically castrate" rapists, according to the severity of the crime. "The way there is first-degree, second-degree, third-degree murder, this [rape] should be graded in the same way, and when there is first degree [rape], castrate them. Operate on them and make them unable to do this,” Imran was quoted as saying by Reuters.

Imran noted that the main suspect in the motorway gang-rape case, Abid Ali, was implicated in a similar incident in 2013 also. "We need fresh legislation to permanently sterilise such [criminals]," Imran was quoted as saying by Dawn.

Imran also reiterated a 'moral' theory on what was triggering such sexual crimes.

"He said sexual crimes should be fought by the entire society, and not just police. 'World history tells when you increase fahashi (vulgarity) in the society, two things happen: sex crimes increase and the family system breaks down,'" Imran was quoted as saying by Dawn.

Imran claimed Pakistan's family system was "intact". He claimed, "New Delhi too has become the 'rape capital' of the world due to obscenity in Bollywood." Imran told the interviewer, "Compare the movies made in India 40 years ago to the movies being made now. Look at the impact of those movies". Earlier this year, Imran, who has been divorced twice, had blamed Bollywood for the rise in sex crimes and divorce in Pakistan.

Meanwhile, on Monday, the Punjab Police announced that an accomplice of Abid Ali, who had been arrested, confessed to gang-raping the victim on the motorway. Police said the DNA of Shafqat Ali matched the samples found from the crime scene. Abid Ali remains absconding. Geo News reported a third man, Bala Mistri, had also been involved in the incident. "All three went to commit the crime, but Bala Mistri turned back halfway," Geo News reported. "Shafqat also told police that he and Abid had tried to rape a woman in Sheikhupura a month earlier but Punjab Police arrived on the scene to prevent the crime, forcing the two to flee," Geo News added.