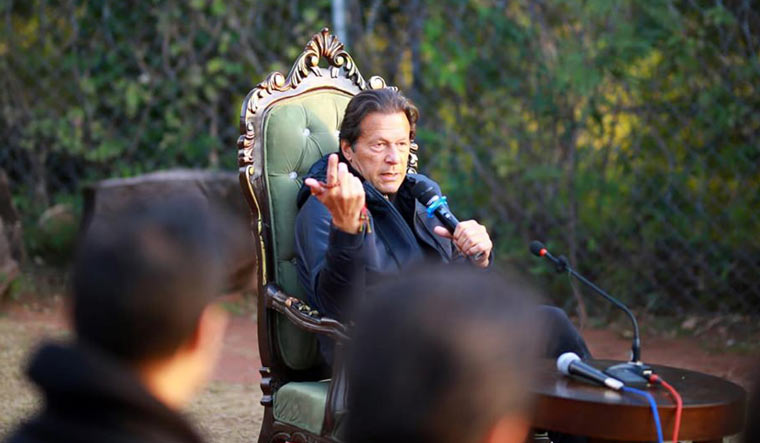 Pakistan Prime Minister Imran Khan has maintained an alarmist line against his Indian counterpart, Narendra Modi. From accusing him of being a fascist to warning of genocide in Kashmir, Imran has consistently targeted Modi.

Now, it seems, Imran considers India to be the source of most problems in Pakistan. Last week, Imran had told a group of Pakistani content developers and Youtubers in Islamabad that he held Hollywood and Bollywood responsible for the surge in sex crimes in Pakistan.

Responding to an audience question, Imran argued that mobile phones had made available to children content that had never been available in human history. Imran referred to this situation as being a “threat and challenge”. This situation had to led to fallout, Imran said, referring to the surge in drug use in schools. Imran claimed he was not aware of the extent of drug abuse among children until he became prime minister.

A second consequence Imran mentioned was the rise in sex crimes. “Sex crimes are sky-rocketing in Pakistan; paedophilia is rising. Child pornography is prevalent in Pakistan; our government is clamping down on this,” Imran told the audience.

He attributed the reason for these sex crimes as being the content coming from outside. "We take content coming from Hollywood, then Bollywood and then Pakistan... People who use this content don’t understand Western culture. They don’t understand that the most harmful thing of the Western culture is being imported here via Hollywood,” Imran argued.

Imran said the consequence of being influenced by this content was the "breakdown of the family system" and rising rate of divorce. Imran claimed when he went to England, the divorce rate there was one in 14 marriages;, now it is "70-80 per cent".

Ironically, Imran Khan himself has been divorced twice and has been accused of using drugs.

Imran's first marriage to Jemima Goldsmith lasted nine years and ended in 2004. His second marriage to journalist Reham Khan lasted just 10 months in 2015. In February 2018, Imran married his current wife, Bushra Bibi, who is believed to be a faith healer.'

In 2018, Reham Khan wrote a tell-all book in which she alleged Imran used to have up to 6gm of cocaine a night.