Warns of parallels with Nazi Germany, says that India may target Pakistan 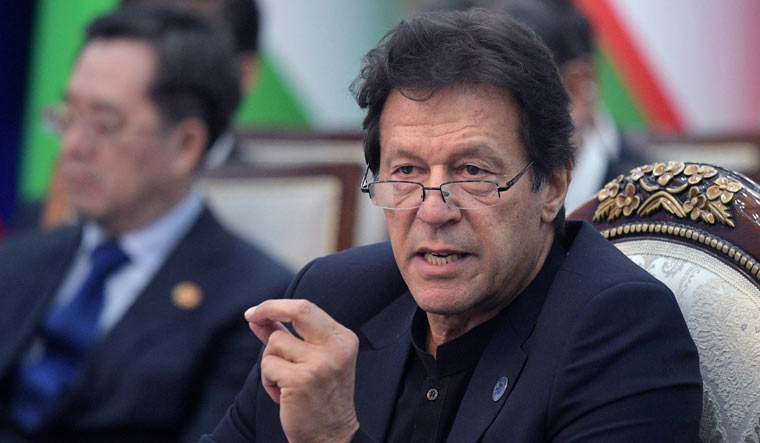 In a series of tweets on Sunday afternoon, Pakistani Prime Minister Imran Khan continued his attack on India's move to abrogate Article 370, warning that the policy was influenced by the RSS ideology, which he says is akin to that of Nazi Germany.

"The curfew, crackdown & impending genocide of Kashmiris in IOK is unfolding exactly acc to RSS ideology inspired by Nazi ideology. Attempt is to change demography of Kashmir through ethnic cleansing. Question is: Will the world watch & appease as they did Hitler at Munich?"

"I am afraid this RSS ideology of Hindu Supremacy, like the Nazi Aryan Supremacy, will not stop in IOK; instead it will lead to suppression of Muslims in India & eventually lead to targeting of Pakistan. The Hindu Supremacists version of Hitler's Lebensraum."

The rhetoric is a continuation of what Khan was saying the previous day.

Then, while speaking in a joint session of Pakistan’s Parliament, Imran Khan had compared Prime Minister Narendra Modi to Hitler, saying that India’s policy in Kashmir was one of ethnic cleansing. Khan said that “attacks like Pulwama will happen again” with India’s approach, warning that “They will attempt to place the blame on us again.”

He carried on, asking “If a war happens, if we fight to the last drop of blood, what kind of war will that be?" adding that a war between two nuclear-armed nations would have global consequences, but that he was not threatening nuclear blackmail.

Khan’s statement comes after the United Nations rejected Pakistan’s request for mediation, citing the Shimla Agreement which explicitly states that the matter would only be resolved bilaterally and peacefully. In a statement by the spokesperson for the UN Secretary-General, it was made clear that the matter would not be brought to the attention of the United Nations Security Council.

Pakistan has since said that China will support their bid to bring the matter to the UNSC, with the Pakistani Foreign Minister Shah Mahmood Qureshi visiting China on Saturday to meet his diplomatic counterpart. On his return, he tweeted that “China supports Pakistan’s repeated calls for peace and stability and we will work together to highlight the voice of Kashmiris to the world.”