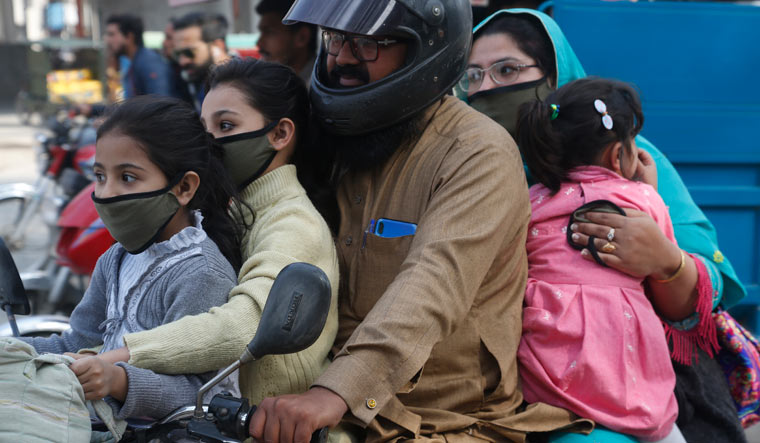 Representational image of a Pakistani family

In clear defiance of the government directives, hardline clerics in Pakistan on Tuesday announced they would resume congregational prayers in mosques, even as the coronavirus cases in the country rose to nearly 6,000.

The government has banned prayer congregations of more than five people as part of its measures to curb the spread of the deadly coronavirus.

Despite the government's pleas to observe social distancing, a group of hardline clerics held a meeting in Karachi to discuss the issue of ban on such prayers and made the announcement before media at the Karachi Press Club.

Mufti Taqi Usmani, a religious scholar and former judge of the Federal Sharia Court, who was part of consultation, said it was decided that five time prayers as well Friday prayers would be held in mosques.

He, however, said that the “precautionary measures” of the government would be taken to avoid the spread of the coronavirus.

The clerics’ decision came as the government announced to extend the lockdown for another two weeks until April 30.

Those present at a press conference after the meeting included representatives from the Jamiat-e-ulema Islam, Jamiat-e-ulema Pakistan, Jamaat-i-Islami and Tanzeem-e-Islami among other religious parties.

The decision came despite announcement by Prime Minister Imran Khan to meet the clerics in order to discuss the issue of gathering in mosques in the holy month of Ramadan, which will start from April 25.

On Monday, over 53 senior clerics of Rawalpindi and Islamabad belonging to the Wafaqul Madaris al Arabia held a meeting in Jamia Darul Uloom Zakria to discuss the ban on prayer congregations, Dawn News reported.

The Monday meeting—attended by clerics representing various seminaries, banned groups, proscribed persons and political and non-political parties—warned the authorities against the ban and said government leaders should abide by religious norms and seek forgiveness.

The warning came before the government could come up with a plan to curb the spread of COVID-19 during the holy month of Ramadan.

Pir Azizur Rehman Hazarvi, president of the Jamia Darul Uloom Zakaria in Islamabad, said, "The closure of mosques, shutting down Friday prayers and Taraweeh is unacceptable to the countrymen."

Hazarvi, who is also the patron of Jamiat Ulema Islam-Fazl (JUI-F), insisted that in order to get rid of the virus, it was imperative to seek forgiveness from Allah and increase the populace in mosques.

A video clip released by the clerics on Tuesday showed leaders of various political and non-political organisations—including JUI-F, Aalmi Tanzeem Khatam-i-Nabuwat, seminaries such as Taleem ul Quran Raja Bazar and a representative of banned group Ahle Sunnat Wal Jamaat—sitting in close proximity of each other.

The meeting did not acknowledge the official directives of a maximum of five persons inside mosques for the collective prayers as the clerics said that the testing times demanded more time for prayers and announced that apart from the five times prayers, Friday and Taraweeh congregations will continue.

The clerics, however, agreed to take precautionary measures like use of hand sanitisers, removal of rugs and carpets, washing of floors, cleaning of hands with soaps and social distancing. Hazarvi said, "The senior clerics have noted that all efforts will be made to avoid clash and confrontations with the government and the state institutions."

Every week, Aziz releases footages of huge congregations gathered for Friday prayers, denouncing the restrictions imposed by the government. As a result, the number of mosques organising large Friday congregations is increasing in Islamabad.